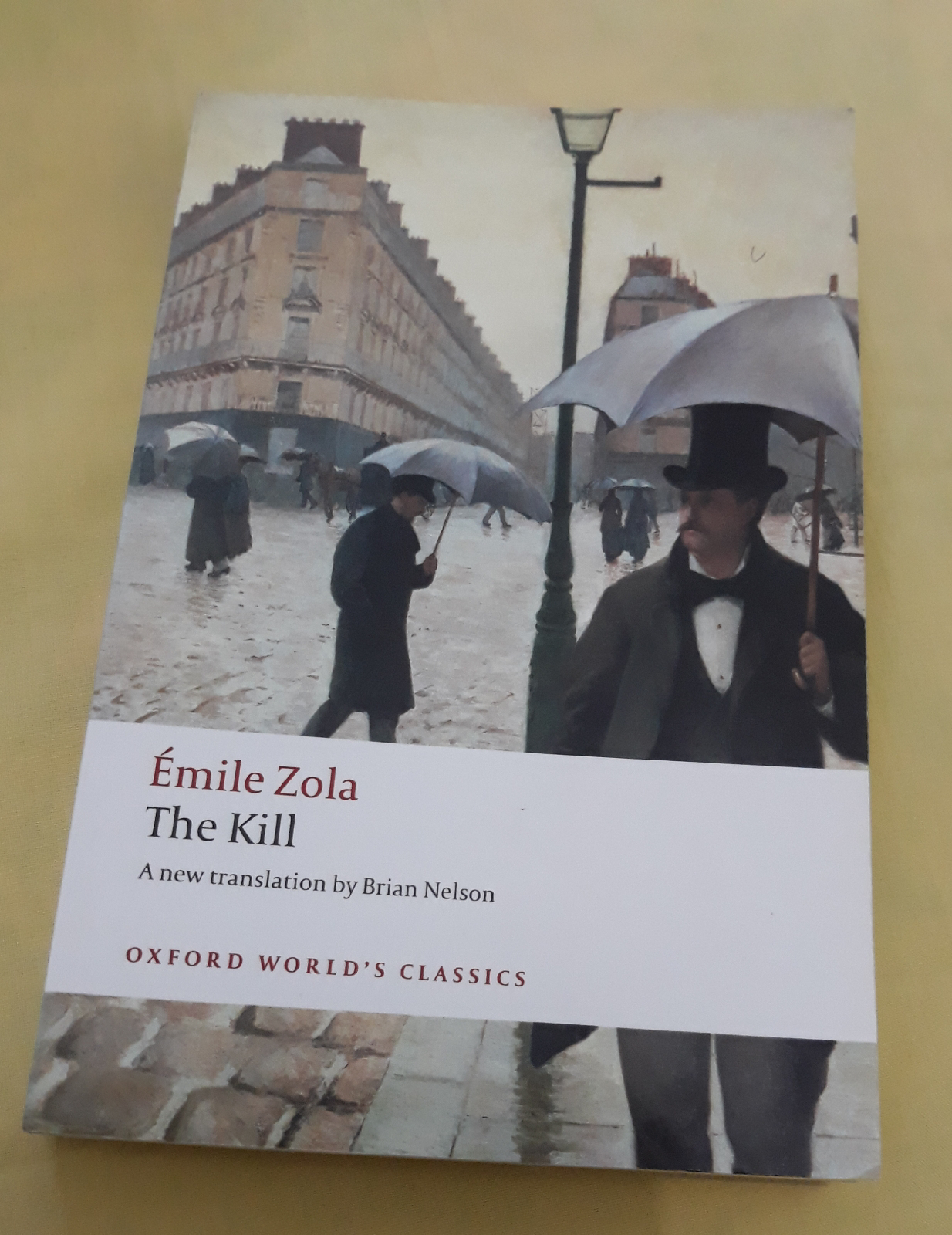 The original title of this second novel in The Rougon-Macquart cycle is La Curée, a hunting term which means the part of an animal thrown to the hounds who have run it down to the ground. Set directly after The Fortune of the Rougons, it tells the story of Aristide Rougon, the unsuccessful local journalist, greedy and money lover, who moves to Paris following his brother Eugène. In his work as a clerk, he learns much about huge reconstruction of Paris about to take place (the real Hausmannization in 1850-1860). He is impatient to take his dream and plans into action, but doesn't possess the capital. Madam Sidonie, the fourth children of Pierre Rougon and Félicité Puech, offers a solution: marrying a pregnant bourgeois girl named Renée, who is desperately seeking a "salvation" to avoid scandal. The "deal" takes place even when Aristide's wife: Angèl is dying. With the dowry from his wife, and support from the Minister - his brother Eugène, he shakes himself from his Plassans origin by assuming a new name: Aristide Saccard, and is now ready to emerge to high society.

We can see from ì, that Aristide possesses a good business instinct. Now he shows it its fullness in his capacity as real estate speculator. From his inside knowledge of the reconstruction, he knows which houses is going to be demolished to be replaced with new boulevards. He buys them cheap, then buys them back through numerous false transactions done by his agent, each time with higher price. When the city is ready to give compensation to the present owner (Saccard), the house values will be much higher than it should be, and 'gold will be pouring down' into Saccard's mansion.

Renée comes from an "old bourgeois" family, and has spent most of her life in a convent. She inherites a family home, over which Saccard knows would be build a boulevard. After marrying Saccard, Renée plunges into the society of nouveau riches of Second Empire of France with its immoral and corrupted way of life. And this is where the term la curée becomes relevant. Renée strongly rejects Saccard's proposal to part with the mansion . So in order to get it, Saccard spoils her with expensive mansion, dresses, and jewelry, and made her drunk with luxury. Every time Renée needs money, Saccard would give it her with pleasure, but asks her to sign promisory notes in return.

After having all the pleasure (including lovers) the society provide, Renée becomes bored, and longed for a new invented kind of pleasure. She finds it in Maxime, her stepson (Saccard and Angèl's only son), an androgynous young man who lives with his father and stepmother. The two soon begin an incestuous relationship, and thus Renée put herself deeper into sinful existence.

However, Saccard has another plan for his son: marrying him to Louise de Mareuil, to get into a huge dowry and higher place in society. Maxime, who gets bored to Renée's obsessive clutch of him, sees a way out by agreeing the marriage. In the attempt to run away with Maxime, Renée finally signed the deeds to her family home (planning to take the cash by herself to pay the journey), but Saccard caught the couple kissing, and took the signed deeds in triumph; stripping Renée, in the end, of happiness and luxury, amidst the pain realization of her sin. Thus Renée - symbolizes individual citizens of France - becomes the part of the animal which was won by the hounds (Saccard and Maxime, who symbolizes the nouveau riches society of the Second Empire).

I think The Kill is placed right after The Fortune not without reason. It presents the clearest and complete picture of the Second Empire's moral-corrupted society:
=Excessive luxury and pleasure
=Collapsing of family structure, changed into commercial ("The idea of a family was replaced for [the Saccards] by the notion of a sort of investment company where the profits are shared equally" ~ p.104)
=General crisis of identification and gender deviance (Maxime the man-woman whom Renée likes to dress as girl; Maxime "had taken [Renée] for a boy" before having sex in the hothouse).
=Massive speculation

All this is the result of modernization brought by Baron Hausmann. After this, Zola will break each "illness" and results down into the next eighteen novels.

On my first read, I've been focusing only to the plot (and its representation to the Second Empire); and so classified it as unimpressive. Now I've had the advantage of reading The Cambridge Companion to Émile Zola, edited by Brian Nelson, which explains a lot of Zola's numerous metaphors, which often seems unrelated when we are reading his books.

The first paragraph that describes the jammed traffic of carriages procession leaving Bois de Boulogne, for example, is not just an opening; it represents Second Empire as "a sticking pit of corruption with toxic impact on people within it". Then the people in the carriages with no name, represents "nothing human matters enough to desire motion"; they are all "standing still in a line that cannot move because it has nowhere to go". So, again, it correlates with the determinism Zola was adopting in his novels. The last chapter of The Kills shows how Renée, now returned to his father's home, wonders how she came to her downfall ("who has stripped her naked?) Renée doesn't realize of her downfall because the corruption exists inside the society - "the impact of a large group of beings has on every smaller group of beings within it". The determinism - the polluted environment in which you live will carry you to its ruin; you don't realize it when you are inside, but once out of it, you'll see it more clearly. Thus, Renée is perhaps the only one of the Rougon-Macquarts (excepting Doctor Pascal) who eventually comes to this revelation (albeit too late).

Reading The Kill during the Covid-19 pandemic brought a mixed emotion to me. I loved the picturesque prose of the first half (description of Bois de Boulogne always wakes up the artistic sense in me), then I struggled with disgust and depression during the second half, but Zola's final beautiful stroke in the last chapters left me breathless (as usual). Well, at least I understand a little more of Zola's genius after this second read.

Posted by Fanda Classiclit at 6:49 PM