The Life of Émile Zola: An Oscars Winning Movie 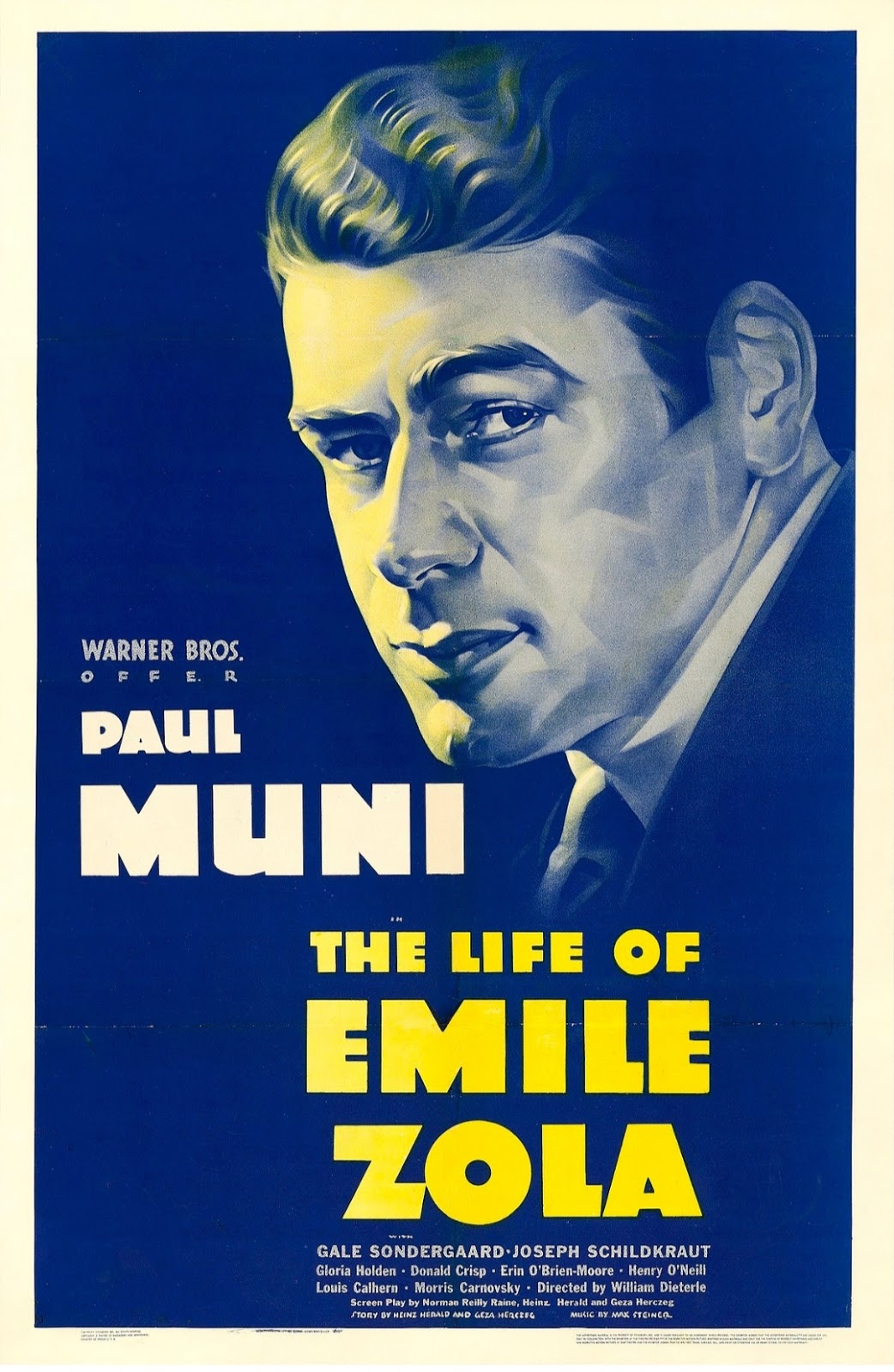 You might not know that one of the movies about Émile Zola has won an Oscars in 1937. The Life of Émile Zola was also marked as Warner Bros' first Oscars for Best Picture.

The Life of Émile Zola is a biopic movie, mainly depicting Zola's involvement in the Dreyfus Affair. It was released on August 11, 1937, directed by William Dieterte. This movie also received ten nominations from the Oscars, including Best Actor for Paul Runi as Émile Zola (not won), and Best Supporting Actor for Joseph Schildkraut (which he won).

The movie opens with Zola's first arrival in Paris, staying in the drafty attic of an apartement which he shared with Paul Cezanne. Both were very poor, but luckily Alexandrine (Zola's fiancee at that time) got him a job at a newspaper. He was soon fired after publishing his novel: Claude's Confession, which the police regarded as provocative. When dining at a cafe with Cézanne, Zola helped a prostitute who was hiding in the cafe from police raid. He listened to her story, and noted her name as Nana. You must have guessed what happened next. Yes, this encounter with Nana inspired him later to write a novel titled Nana, which, according to the movie, brought him fame and success.

Zola has been living amidst luxury and comfort brought by his fame and success, when Captain Alfred Dreyfus was accused of treason. He was (according to the movie) unconcerned with this issue at first, even rejecting Madame Dreyfus who visited his house to plea for his husband's rescue. During this visit, Madame Dreyfus told him that Colonel George's Picquart had a solid proof that the culprit was actually a Major Esterhazy. It was this proof that finally intrigued Zola into action. The movie also shows Dreyfus' humiliation in a public procession and his deplorable state during the solitary prison in the Devil's Island. Schildkraut's acting here really deserved the Oscars!

But I think the climax would be the court scene, where Zola gave his speech in front of the jury. It was followed with Zola's accused of libel, his flight to London, and ended with his death of carbon monoxide poisoning from the clogged chimney.

As I don't watch much old movies, I won't discuss much about its qualities. Instead, I'm focusing much to the movie accuracy (or inaccuracy) with the book. But first of all, I must say that I don't really like Paul Runi's portrayal of Zola. He made Zola looks like a fat lazy pompous bourgeois - which might have been true, I don't exactly know - but I failed to see any trace of intelligence and vigor of a passionate writer in Runi's appearance, which you could feel from his writings. No, I think Runi has totally failed to portray Zola.

I have mentioned before how Nana was described as Zola's first successful novel. This is not accurate, though, because it's actually L'Assommoir which have first brought fame and money to Zola. That is not the only inaccuracy in this biopic. You know, I assume, that Zola died of carbon monoxide poisoning from the clogged chimney in his bedroom. Though he died in his sleep, not in his study, which this movie indicated.

I was not too familiar with the details of Dreyfus Affair, but I'm quite sure it was Zola's friends who had persuaded him to take action concerning Dreyfus, and not Madam Dreyfus, who talked and pleaded with Zola at his house to help his husband. I think Zola took action not because he took personal pity on Dreyfus, but because he was disgusted at how French army has falsely accused its member in their anti-semitic sentiment.

There were some other minor inaccuracies, like the way Cézanne broke his friendship with Zola because Zola depicted him as the mad painter in The Masterpiece. In the movie, Cézanne *only* felt weary of Zola's wealth and fame, and chose to return home. Zola's flight to London to avoid prison isn't as frantic as it should be in reality. It looks like Zola's just taking a holiday with Alexandrine. And Jeanne didn't even exist here. But of these minor inaccuracies, I realize that it will be quite complicated to include all this into a movie. So, I'm not complaining. The fact that Zola's legacies were at least honored by this biopic (and the Oscars), with a hope that more people would read his books and learn about his life, is more than enough for me.

Posted by Fanda Classiclit at 5:49 AM