The Fortune of the Rougons by Émile Zola (second read) 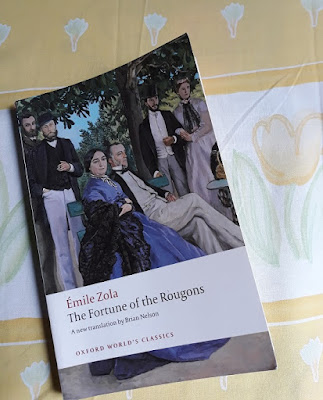 o once commented on my first review, that The Fortune of the Rougons won't probably be considered great if it were a standalone novel. Its greatness lies in it becomes the first (the foundation) of The Rougon-Macquart cycle. I can't agree more. Fortune acted as the introduction of the whole cycle. From this book we get to know what Zola was aiming, which is to portray the disequilibrium of Second Empire of France, through the disordered two branched of a family: the Rougons and the Macquarts.

Basically, Fortune interweaves three stories into one frame:
1. The origin of the Rougon-Macquart family.
2. The historical account of the birth of Second French Empire.
3. The innocent love story of Silvère and Miette.

Published in 1871, Fortune takes place in a provincial town of Plassans. Adelaide Foque aka Tante Dide is an orphan girl of a merchant - a queer, nervous, imbalanced, passionate girl. She married the family gardener, the coarse, vulgar Rougon, and had a son: Pierre. However, she also had a lover, a drunkard good-for-nothing poacher: Macquart. Soon her husband and lover died, leaving her with Pierre and two illegitimate offsprings from Macquart: Antoine and Ursule.

Pierre is the perfect combination of his mother and father: crafty, ambitious, with insatiable desire. He married a local merchant daughter (though rumor has it she's an illegitimate daughter of a Marquis) Felicité Puech - intelligent, full of intrigue, envious, and ambitious. They had three sons: Eugène, Pascal, and Aristide. When their oil business didn't give them the wealth and respect they badly craved, they were full of bitterness.

In 1851, the Rougons, in the last attempt to gain respect, opened their yellow drawing room to some merchants and dealers to have meetings and discuss politics. These local conservative bourgeoisies secretly supported the monarchy as they're afraid of losing their privilege against the working class, if France continued to be led by the Republican. When the eldest son Eugène Rougon sent his parents reports about the upcoming coup d'état, Pierre & Felicité saw a brilliant way to gain fast fortune.

Antoine Macquart is almost a duplicate of his father - lazy, cowardly, alcoholic, egoist, hypocrite; while from his mother, he inherited very little - lack of discipline, and insatiable desire for pleasure and comfort. He married a hardworking and alcoholic woman, Fine, and they had three children: Lisa, Gervaise, Jean. Besides heredity influence, Zola also believed that guilty sex produces faulty behaviour in subsequent generations. The strongest result is in Antoine Macquart's family. Gervaise - we would follow her faith later in L'Assommoir - but here we get a glimpse of how she was brought up literally with drinks and by her drunkard parents. She was conceived when her parents were drunk, resulting to a delicate feature and a liking of drinks.

Ursule Macquart inherited more from her mother, than her father. She is shy, whimsical, melancholy, with sudden changes of nervous laughter and dreaminess. She married a respectable hatter: Mouret, and they had three children: François, Hélène, and Silvère. After Ursule died of consumption, Silvère lived with Tante Dide.

Fortune opens with the story of Silvère and his sweetheart, a very young girl called Miette. Theirs is an innocent relationship, almost childish. It was on the night of December 1st, 1851 - the night of the coup d'état. Together with Miette, Silvère, full of idealistic (more of a nervous hysteria, actually - inheritance from grandma Dide!) views of Republican, joined a group of insurgents which was marching towards Plassans. Fortune could be viewed as a miniature of the recorded history about the coup d'état. Louis Phillippe staged the coup; just as the Rougons, according to Eugène's secret letters, staged Pierre's heroic salvation of the city. And just as the bloody origins of the Second Empire, so did the fortune of the Rougons was paid for in blood. 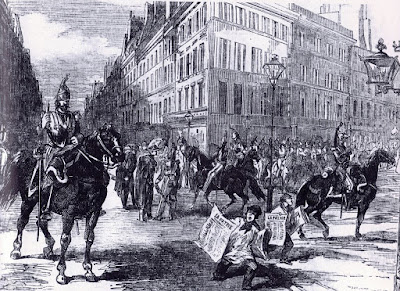 As usual with Zola, Fortune is full of metaphors. In fact you would be surprised with how often the word "blood" or something represents it (red color in the flag carried by Miette and Miette's coat, for instance) surfaced from the entire story, especially near the end. The most obvious one is when Pierre and Felicité was in bed after planning their own "coup":


"They kissed each other gain and fell asleep. The patch of light on the ceiling now seems to be assuming the shape of a terrified eye, staring unblinking at the pale, slumbering couple, who now reeked of crime under their sheets, and were dreaming that they could see blood raining down in big drops and turning into gold coins as they landed on the floor."

Even Pascal, the naturalist self of Zola "could see, in a flash, the future of the Rougon-Macquart family, a pack of wild, satiated appetites in the midst of a blaze of gold and blood."

Another less obvious metaphor is how Zola described the cycle of life using "the door" built by Macquart the poacher to smoothen his adultery with Tante Dide. Dide has closed it after Macquart's death, but later on Silvére and Miette found and opened it once again for similar purpose, though theirs are pure and innocent. It represents how each generation was condemned to repeat the actions of the former. Here is a tinge of the determinism views not uncommon in 19th century.

But the last paragraph (my favorite) is the strongest of all, where Zola stroke his hammer for the last time with all his might:


"But the strip of pink satin fastened to Pierre's buttonhole was not the only splash of red marked the triumph of the Rougons. A shoe with a bloodstained heel lay forgotten under the bed in the next room. The candle burning at Monsieur Peirotte's bedside, on the opposite side of the street, shone in the darkness with the lurid redness of an open wound. And far away, in the depths of the Aire Saint Mittre, a pool of blood was congealing on a tombstone."

Another metaphor of cycle of life I found in the third paragraph of Chapter 1 - the cemetery:


"In 1851 the old people of Plassans could still remember having seen the walls of the cemetery when they were still standing, though the place had been shut for years. The earth, gorged with corpses for over a century,  exuded death... The abandoned cemetery had then gone through a process of purification every spring by covering itself with thick, lack vegetation.... After the May r rains and the June sunshine, the tallest weeds sprouted higher than the walls and could be seen as far away as the main road; while inside the place seemed like a deep, dark green sea bestrewn with big, strangely colored flowers. Underfoot, between the mass of stems, you could feel the damp soil bubbling and oozing with sap."

Life ends in death, and sometimes, death is needed to get a new life on top of it. So Zola opened the book with new life germinating from a cemetery - could the cemetery interpreted to be the dead of First Empire (after February Revolution in 1848)? Then the new stems should be the present Second Republic. Or is it the Republic that is dying, and the new life oozing from the damp soil is the germinating of the Second Empire? Either way, as with all Zola's novels, there's always hope and regeneration after each death.

In his preface Zola mentioned that Fortune, as the first of twenty novels, "could bear the scientific title Origins.” And with such a great origin, it's no wonder that The Rougon-Macquart turned out to be an epic tale of a disordered family during Second Empire of France. Or is it because I have read all the novels (except Doctor Pascal) that I can regard Fortune as great? It's true that when I first read it, I didn't see something special. It is true then what I have mentioned in the beginning, Fortune becomes great because it's an 'origins'. Hence, the title 'cycle' which we put to The Rougon Macquart. Bravo Zola!

Posted by Fanda Classiclit at 7:46 AM

Email ThisBlogThis!Share to TwitterShare to FacebookShare to Pinterest
Labels: 19th Century, Emile Zola, France, Naturalism, The Fortune of the Rougons