The Mysteries of Udolpho by Ann Radcliffe 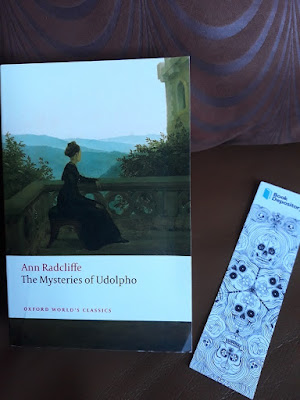 I must say, this was one of the most difficult reads I have ever tackled. As a mystery enthusiast, I thought it would delight me, as The Mysteries of Udolpho has been praised as inspiration for many mystery writers in the centuries after. At first it looked like it. I loved to find that St. Aubert, Emily, and even Valancourt, were nature enthusiasts. I enjoyed reading the beautiful sceneries during their journey around the Alpines. But then, after the death of Mr. Saint-Aubert, and Emily must (according to Saint-Aubert's last wish) live with her aunt, things began to alternate from bad to worse, to bad, to even much worse; especially during her stay in the Castle of Udolpho - the home of the wicked Montoni, to whom Emily's aunt married not long after Emily's stay with her.

Misfortunes came flooding with every change, and everytime you think this one is the worst of all previous, something more wicked would come. At first, you could relate very much with Emily's misfortunes, but after a while you would feel dullness in both the heart and mind. Like something that terrified you so badly at first, but after some repetition, well... it's not so terrifying anymore in the end, you’d feel numbed.

It's doubly torturing because Emily, the heroine, is a calm and loving creature. That she must endure the selfishness, coldness, and shallowness of others, the disgust over Montoni's wickedness, her complete helpfulness to protect her own life and honor, not mentioning her superstitions (which was not unusual at that era), the gloomy atmosphere of a Castle Udolpho, and her fear lest her lover has betrayed her or even dead (which one is worse, anyway?) - why, I was almost surprised that any human being could get through all that safely!

Have you felt depressed already from reading my review? Well, beware that you don't read this book during your gloomiest mood!

It would have been a perfect Halloween read, if only Ann Ratcliffe hadn't thrown every ingredient of horror and evil at a single human being that it seems almost impossible to bear. Well, tired is what I felt after finishing the story. Ann is a great Gothic writer, but never again would I read The Mysteries of Udolpho!

Note: I have read this last year (in October), but just couldn’t spare enough time to write a proper review till now.

Posted by Fanda Classiclit at 7:48 AM