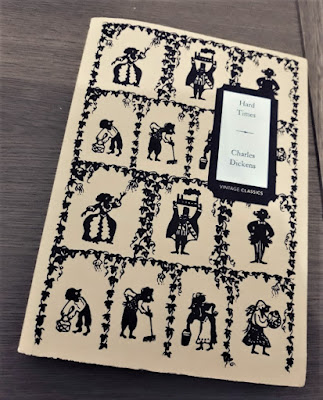 Hard Times is officially my least favorite of Dickens (so far). I feel like he's venting his anger on something when writing the story. It's not just a satire to criticize something, it felt more like a punishment or avenge on something/someone.

Shortly, it's about a gentleman (Mr. Gradgrind) who is fanatical to facts and numbers, that he brings up and educates his children (Louisa "Loo" and Tom Gradgrind) by cramming their minds with only facts and statistics. They never get teaching about morality, love, or charity. Mr. Gradgrind even opens a school teaching and emphasizing on these utilitarian curriculums. As the story unfolds, we get to witness how wrong this kind of education is. Louisa becomes almost like robot, who isn't familiar with emotion, tenderness, and affection. She had a loveless marriage with Mr. Bounderby, only to save her beloved brother Tom - an egotistical boy who doesn't return his sister's love, and ends up as a criminal.

The second theme brought up by Dickens is social and economic disparities of upper and working classes. The story is set in a small industrial town: Coketown. Mr. Bounderby (Louisa's husband) is the owner of a factory - a hypocrite man who boasted himself as a self-made man, while it turns out it was his mother who has sacrificed everything for her son's success - and he always unfairly accuses his workers of being greedy. One of the poorest of the workers is Stephen Blackpool. He was falsely accused of robbing Mr. Bounderby's bank, while the real culprit is from the upper class.

There's nothing wrong with these ideas; I totally agree. The nurturing of brain and soul has to be balanced in order to produce great characters. My objection is in Dickens' rather generalization of contrasting the upper and the working classes. He made it look like the gentlemen were almost always immoral, while the kind people are mostly the working class. But I chose to believe that morality is more individualistic, though it is still influenced further by breeding and education. Proof? Exhibit A: Louisa and Tom Gradgrind. Were they not brought up and educated equally to the Gradgrinds' standard? Yet, from the start we could see that Louisa was more than that. She was more troubled and confused with her upbringing than Tom. Though vaguely, she realized that there was something missing in her, something hollow in her soul; while Tom... well, as Dickens nicknamed him, is just a whelp. Moreover, the idea of an education based solely on facts is rather ridiculous.

Another thing that annoyed me **spoiler alert!** is how Dickens let Tom get away with his crime, while Stephen Blackpool - the only character I could relate with - must die, even before he could witness his reputation be rehabilitated. Dickens didn't let Stephen experiencing any happiness at all, however tiny, but he let the whelp go easily from punishment - if not imprisonment (okay, because his crime is partly caused by his upbringing), then at least let him suffer from humiliation! He who ruined Stephen's reputation (if not his entire life) gets second chance without harm - and helped by Sissy Jupe and Mr. Sleary too - while Stephen gets double 'punishment' (ruined reputation AND fallen in the Hell Shaft), and at the end.... dies without at least properly showing his love to Rachael or even a humble marriage. Come on, what happened here, Mr. Dickens? It's not like you!

Is it maybe that this book is too short (in fact it's Dickens' shortest novel) to let the characters developed a bit without them being so typical? The immoral dark handsome James Harthouse, the cunning widow with her sharp nose Mrs. Sparsit, the liar and boastful Mr. Bounderby - they're all so... hmm... typical? And then there is the "fairy" Sissy Jupe who is selfless, won everyone's heart, always to the rescue (yea.. even rescuing the criminal whelp!). They are all so unnatural. I know that Dickens always include some inhuman fairies throughout his books, but usually, he’d balance them with other humane characters. Not in this book, though, unfortunately. Maybe Louisa Bounderby (nee Gradgrind) is the closest to reality.

Well, I have been ranting too long. In short, it's a bit an unpleasant reading for me, though Dickens never fails to make me laugh at times with his comical writing. I was also disturbed by the way he wrote Stephen's and Mr. Sleary's speeches - I must think hard all the time to decipher what they're saying. So my final rating is...

Posted by Fanda Classiclit at 8:37 AM