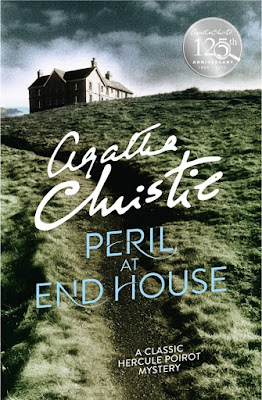 Poirot reunites with Hastings after their last adventure The Big Four (review to be following). They are enjoying a peaceful holiday in a Cornish resort (or so they thought), and Poirot is (again) on a sabbatical phase - declaring that his latest case would be his last, and to rouse his interest would be impossible (he acted this in a couple of times in the past, and this one isn't the last!) When mocked by Hastings, he then admitted that if a bullet should struck the wall near them, then it would be difficult to say no, as he's still a human being after all. Curiously, just then a pebble struck the terrace where they are sitting.

Nick Buckley, a young girl who lives in a house nearby, called End House, walked in and joined them, and found that there's a hole in her hat. You would, no doubt, guess what has really occurred - that the pebble is in fact a bullet, and that someone has shot Nick, but missed only an inch of her head. And so, this case was opened, quite unusually, without a corpse.

Nick's life is clearly in danger. But surprisingly, the missing shot was not the only attempt made against her. She has escaped three accidents before, each of which would have killed her. This news alerted Poirot, and he acted immediately to save Mademoiselle and to solve the case. His first instruction is that Nick (who lives alone in the house, being an orphan) should invite her cousin Maggie to stay with her. Poirot then runs his usual investigating method - talking with all the suspects (Nick's friends, cousin, neighbors, and household), checking on alibis. But from the beginning one thing is missing: the motive! There seems no apparent motive of killing Nick. Poirot employed his grey cells to produce a list of all "participant" involved in the case, but there's always a missing link.

In the meantime, another attempt was made, and this time one life has been sacrificed - Maggie's, not Nick's! Poirot bitterly cursed and blamed himself of his impotence to avoid death, and still... he failed to complete the puzzle. He evacuated Nick to a hospital, and cut off communication from anyone, and yet, Nick got poisoned from eating a chocolate. So, Poirot took an unprecedented step. He falsely pronounced that Nick is dead. Now that the murderer thinks he/she has achieved his/her goal, something is bound to come up to light, which would reveal something about the murderer.

And, yes! The X factor finally became clear - but not before a dramatic "play" produced by Poirot (a stan which he would use in latter cases), a deception, and one of the best plot twists from Agatha Christie, after the one in The Murder of Roger of Ackroyd.

Compared to many of Christie's works, Peril at End House is unique in some ways. It begins without a murder, only an attempt. Thus the detective could interview not only the suspects, but also the "victim". People involved in the case are not of a family, but mostly young people of Nick's circle, and Nick's cousin. So there's a youthful freshness about the scenes that reminds you that it happens in the jazz age. And it often made Poirot and Hastings felt old! :) Lastly, there is only one murder, yet five attempts have been made to one person without avail. Five!

This was certainly a reread for me, because I vaguely remember about the hole in the hat thing, however I was surprised that this has not been one of my favorite from Agatha Christie! The plot is interesting, yes, and if you are clever enough, you might have suspected something fishy from my last sentence on previous paragraph! However what interested me more is the psychological aspect. Poirot observed that since the crime has been committed very boldly, the motives must be unobvious. This is a conclusion from someone who understands much of crime psychology. It would be very interesting to analyze how the murderer must have thought and felt - before making the decision and on executing it.

In short, it's a unique story from Christie, and I loved it!