The Belly of Paris by Émile Zola [second read] 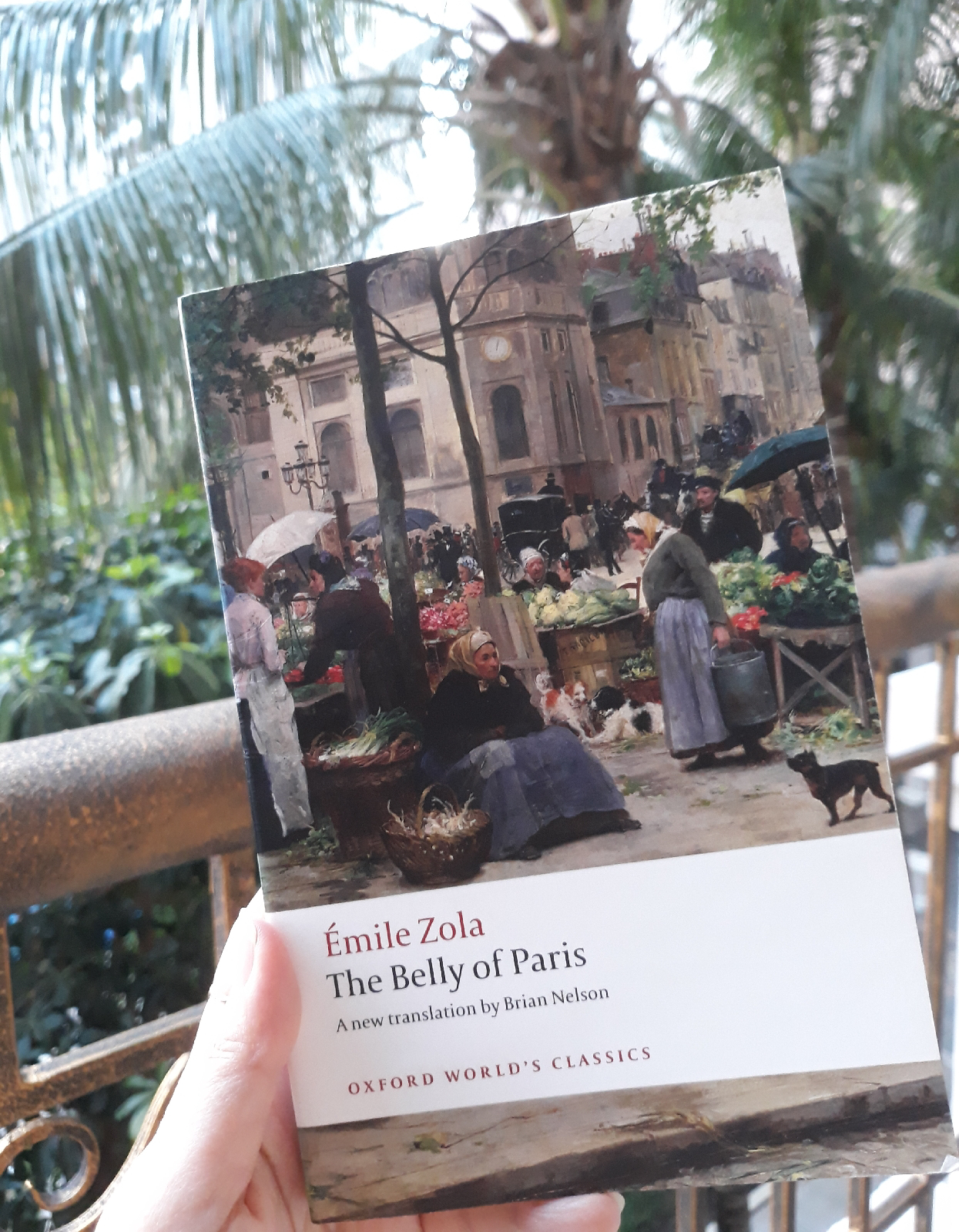 The third novel of the The Rougon-Macquart cycle introduced us to another field in the modernization of Paris brought by the Second Empire: the newly built great central market of Les Halles.

The leading character is Florent Quenu. He is the brother in law of Lisa Macquart (the eldest child of Antoine Macquart). Lisa's husband is Florent's younger brother: Quenu. The couple married and run a charcuterie business. Florent is an escaped convict from Cayenne (Devil's Island), as he was found by the gendarmes in a "suspicious manner" during the December 1851 coup d'état. Though he's innocent, he's deported nevertheless to Cayenne. Now he returned to Paris, thin and haggard, found for the first time by Madame François, a gardener who sells her vegetables on the pavement outside Les Halles. 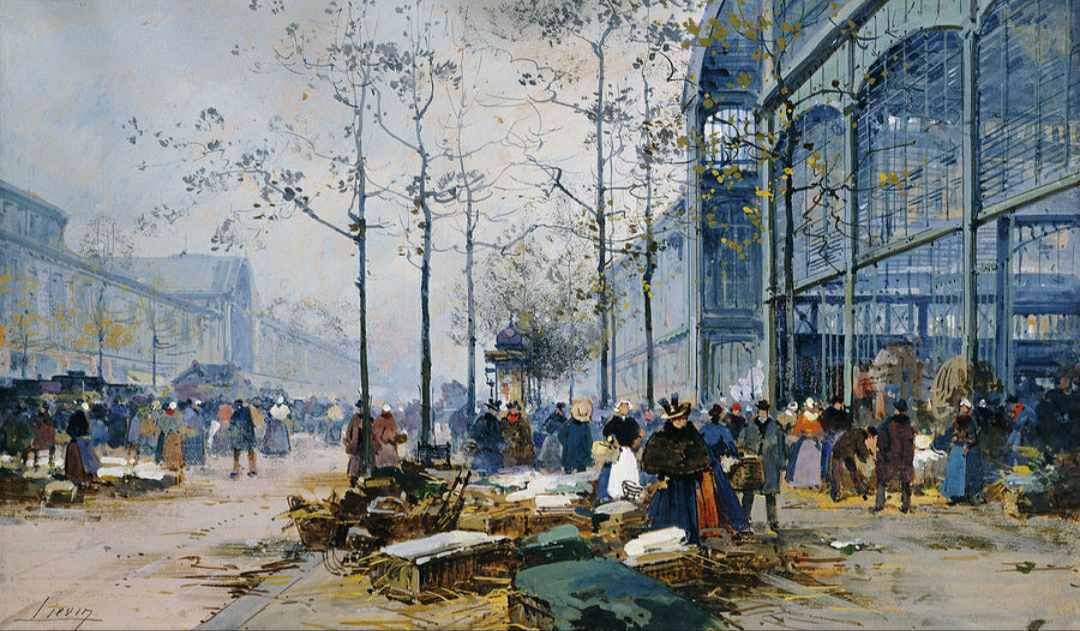 The Quenus received Florent in their house, concealing his origin as Madame Quenu's cousin. Florent soon got a job as Inspector of the fish market. He began to feel overwhelmed by the vastness of Les Halles, and felt entrapped and drown by its abundance of food. He, the Thin man, felt lost and disgusted amidst the excessive food provided for the Fat (the bourgeoise), particularly at the Quenu's charcuterie. Zola portrayed the vastness of Les Halles as that of a cathedral, a town, and even a forest:

"Then they turned into another covered avenue, which was almost deserted, and where their footsteps echoed as though in the vault of an empty church."

"As they turned into the broad central avenue, he imagined himself in some foreign town, with its various districts, suburbs, villages, walks and streets, squares and intersections..."

"And high above this phantom town, stretching far away into the darkness, there appeared to be a mass of luxuriant vegetation, a monstrous jungle of metal, with spindle-shaped stems and knotted branches, covering the vast expanse as with the delicate foliage of some ancient forest." 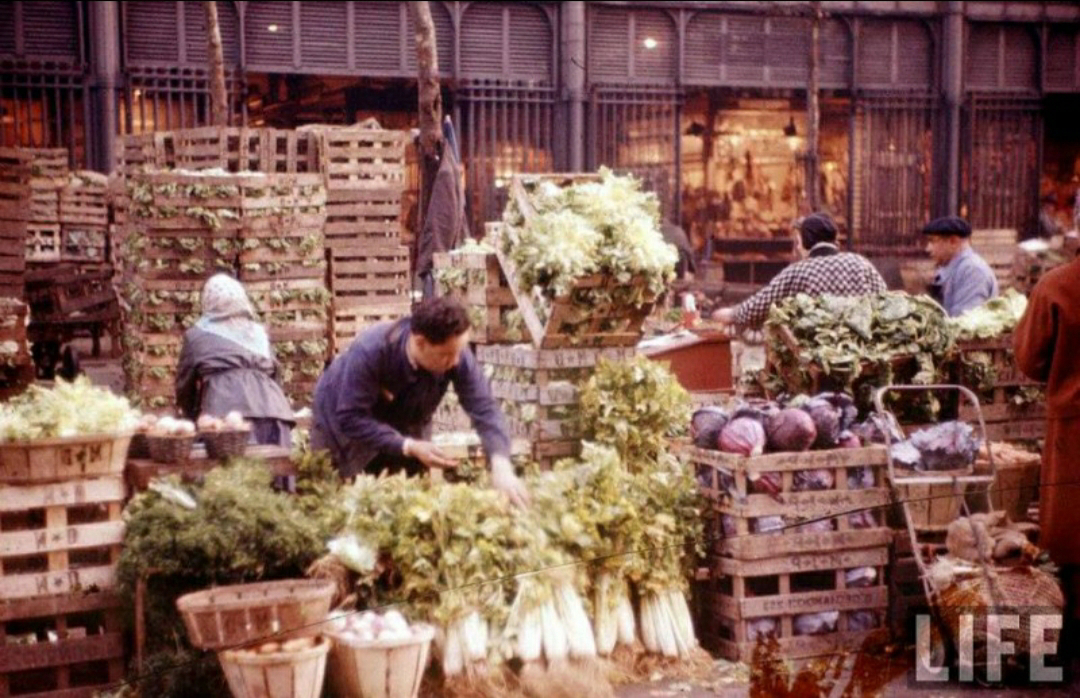 Florent then succumbed to his old republican ideas, after mingling with Gavard and his "political friends". They were designing a resurrection in Paris. Florent, who were already disliked by the fishwives (the stall holders in the fish market), now brought a threat to the Quenus household by his political views. And that's why he must be get rid of. Who's gonna win in the end - the Fat or the Thin? Of course you already know the answer to this.

Les Halles, which is called the belly of Paris, symbolizes the excess of food (luxury) to fulfill the bourgeoise insatiable appetite during the Second Empire. Claude Lantier, a painter, Lisa's nephew (later appeared in The Masterpiece) voiced Zola's views on this subject. He loved to capture the beauty of fresh produce displayed at the market, but on the other hand, he hated the idea that the abundance of food would be swallowed by "those bourgeois bastards", as Claude called it. 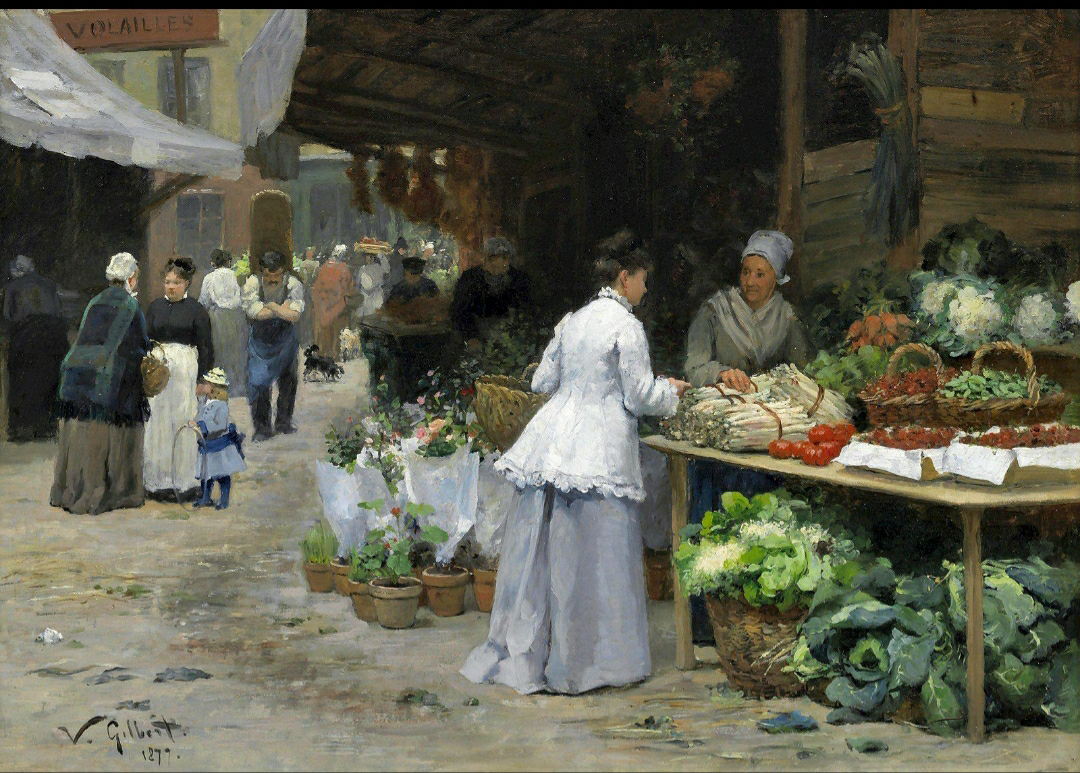 He further invented the irony of the Fat and the Thin. The Fat represents the middle class or bourgeoisie with their passion of luxury, while the Thin is the poor working class. But Claude made an exception for Madame François, who lived modestly and happily in the village, who, according to Claude, doesn't belong to either category. So, I guess, the moniker Fat and Thin works only for the middle class with insatiable desire for luxury, and the working class who dream to get rich, or those with hate, bitterness, envy towards the bourgeois. Florent, Gavard, and Claude are definitely the Thins, but not Madame François. On the other hand, the fishwives with their ambitions are the Fats. 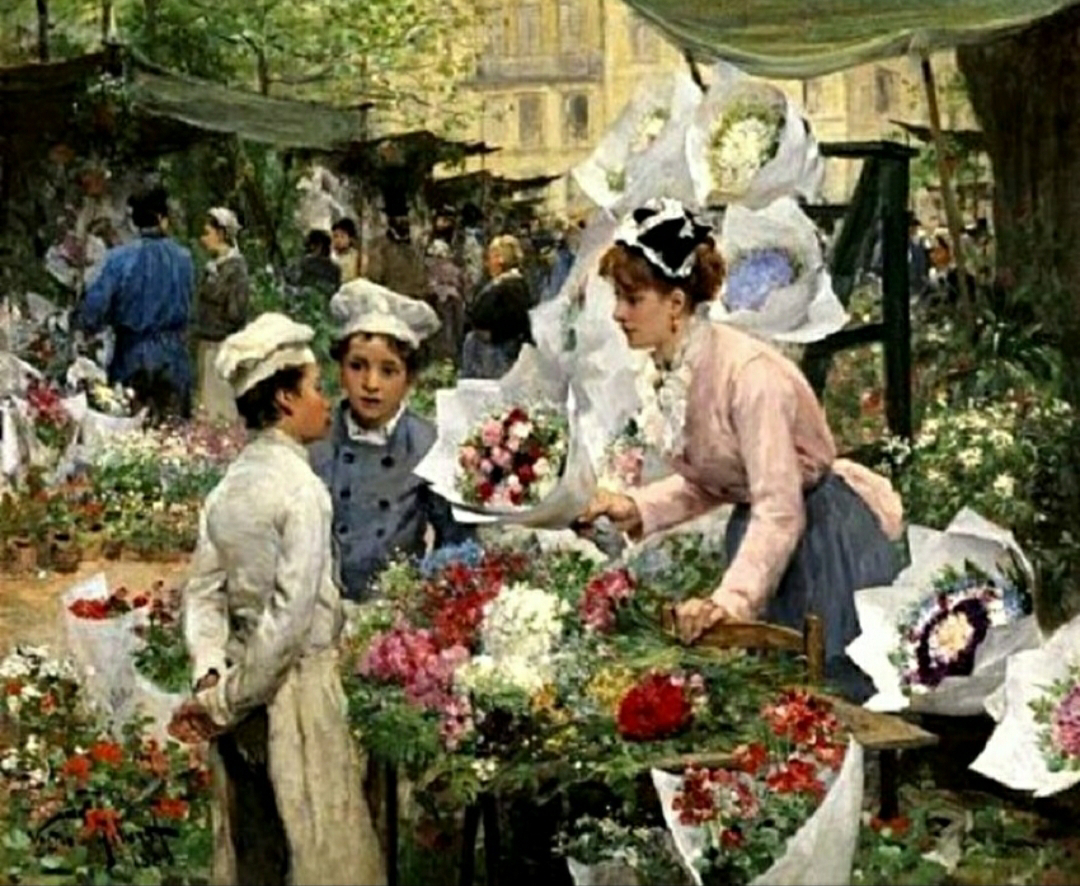 But the Quenus should have been excluded, because they live contentedly from their own business (which they worked on diligently), never doing harm to others. Their treatment towards Florent in the end is justified, because he is plotting to cause chaos in the neighborhood. The Quenus has received him in their house, even offering him half of Gradelle's money. But Florent, the ungrateful dreamer, had the audacity to plan the revolution from inside the house! He never even thought about what trouble he would bring to his brother. See.. the Thin is equally dangerous for France as is the Fat! If I were in Lisa's position, I would do exactly what she had done. 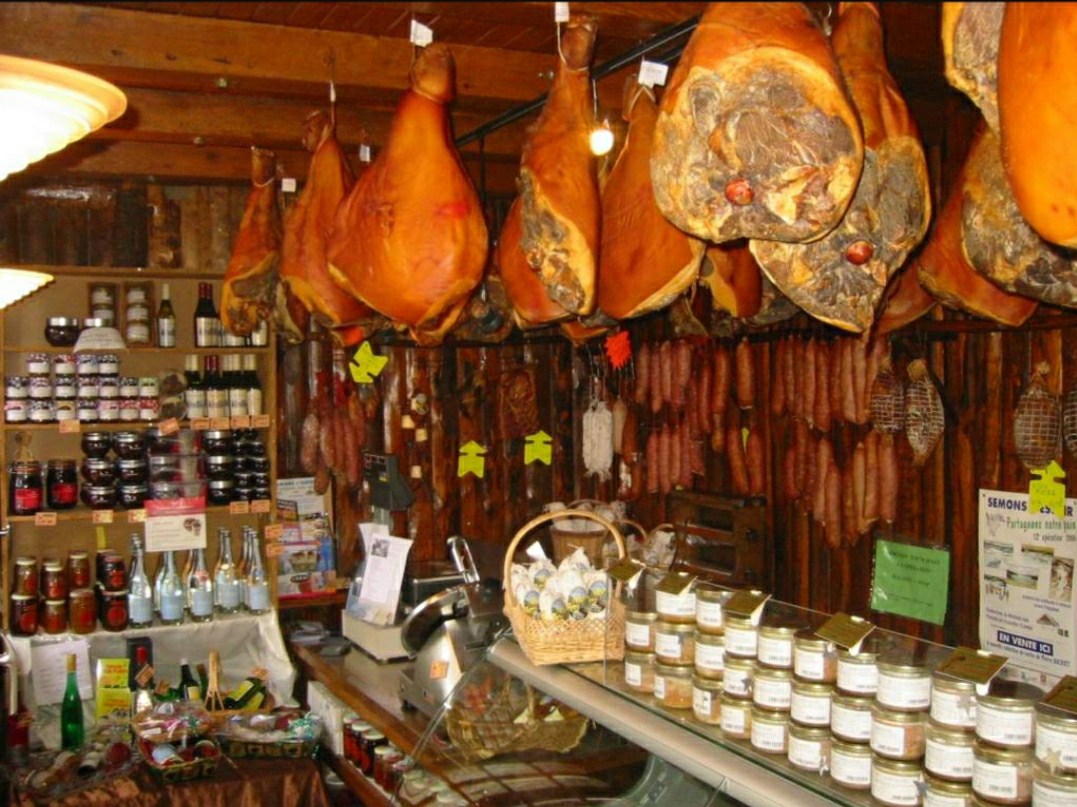 To sum up, Zola's "treatment" towards Lisa is the only negative point I granted this book. I had enjoyed the reading immensely, and loved every minute of it, especially the daily activities of the fish market and the charcuterie - the fishwives' intrigues, the competition of La Belle Lisa and La Belle Normande. Lisa Quenu has become one of my favorite characters of the Rougon-Macquart, because of her sensibility and intelligence.

Posted by Fanda Classiclit at 6:29 AM