One of Ours by Willa Cather 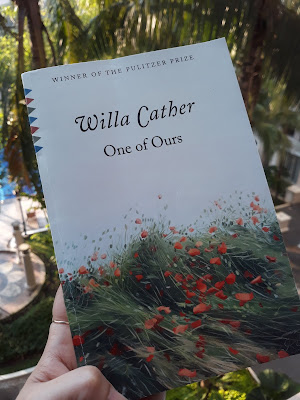 Claude Wheeler is a proud, restless, insecure young man who grew up in Lovely Creek, Nebraska - the son of a successful farmer. He acutely feels unfulfilled and purposeless in a passionless life dictated by his parents: the hardworking insensitive father Nat Wheeler and the pious mother Evangeline Wheeler. His mother has made Claude study at the Temple University against his will. But he then enrolled at the State University, and befriended the Elrichs, which are warm and charming - the opposite of his own family. That is the first time he felt at home, belonged to a family.

I was so devastated when Claude was forced to drop out school to manage the family farm. He had been a great student, and he seems to be happy doing it. Hate it when parents keep deciding their children's future without even listening to what they'd actually like to do.

Marrying the loveless and prudish, fanatic Enid Royce was a big mistake for Claude; he didn't even love her, I guess. It might be something that he felt he should do as a farmer... or he thought marriage will give him happier life, I don't know. His hope for happiness was smashed when Enid left him to China as a missionary. I always hate people like Enid, whose idea of doing a good deed is abandoning their own family to look after strangers in another continent. That is pure nonsense!

When we think Claude isn't about to be happy, the World War I erupted, and Claude enlisted in the US Army. For other young people, it might be the ideology of serving one's country, that encouraged them to enlist. But I think Claude saw it as a gate to freedom and purposeful life he had been dreaming of. It's nothing heroic; for the first time he felt he was needed, belonged to, and doing things that really mattered - a truly fulfilling life. And I'm happy for it. There's nothing more important for human being, than leading a fulfilled life. It's no matter what kind of life one's leading - as long as one has freedom and is at peace with one's self.

One of Ours has quite a different style from Cather's previous novels. It's not as quiet as Death Comes for the Archbishop or O Pioneers, though it still talks about life in the Prairie. However, it's also not as gruesome as usual war stories. Actually, it feels more like the war is just a background to write about Claude's feelings, maturing views about the world, and his journey to reach happiness.

* The historical passage about Edith Cavell, the British nurse who saved soldiers' lives and helped some of Allied soldiers to escape from German-occupied Belgium, of which she was later arrested and shot by German firing squad. I have never heard about this until I read this book. 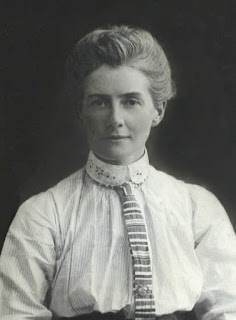 * I suspect, Claude represented Cather's love for her land. It's not the farmer life that he disliked. It's rather that modernity and prosperity (that comes with modernity) killed the old sentiment about the land as part of nature and human's life. Modern people tend to regard land as a mean of prosperity, not a harmonious companion or partner in creating better lives (for both parties). This quote reflects that sentiment:

"With prosperity came a kind of callousness; everybody wanted to destroy the old things they used to take pride in. The orchards, which had been nursed and tended so carefully twenty years ago, were now left to die if neglect. It was less trouble to run into town in an automobile and buy fruit that it was to raise it."

* Beautiful quote about LOVE, came apparently from the man who had just been broken-hearted:

"Human love was a wonderful thing, and it was most wonderful where it had least to gain."

* Another oh-so-true quote when Claude closed his house for the last time - the house that he's built and furnished with love. After the broken heart, it became mere building without any value:

"How inherently mournful and ugly such objects were, when the feeling that had made them precious no longer existed."

One of Ours is a deeply moving novel. Though it was written a bit romantically, it's full of philosophy that brought you to ponder more about your own purpose in life. For me, it's a gentle, down to earth story that gives one a little side view about the war impact of World War I. For some, it's evil and unnecessary, but for few others, it's like the freshness of a new spring - all depends on where do you see it from.

I must say... very inspiring, Ms. Cather! The Pulitzer Prize in 1923 is very well earned.

Email ThisBlogThis!Share to TwitterShare to FacebookShare to Pinterest
Labels: 20th Century, America, One of Ours, Willa Cather