Algernon Moncrieff on The Importance of Being Earnest

Algernon is the most complex character in this play. In a way he shared a similarity to his friend Jack Worthing (in creating an imaginary character to hide himself in), however for the rest, he was completely different to Jack. Algernon was a dandy young man—who I think was similar to Oscar Wilde himself (and I can’t think but to see Wilde’s presence in Algy!). Jack described him as ‘over-dressed’ and ‘always feels hungry’. Algernon’s passion in food was ridiculous in this play, that he could eat all cucumber sandwiches that were supposed to be served for his aunt, and had to tell lie to his aunt that there have been no cucumbers available in the market! And the scene of him had a fight for muffins with Jack…oh..that was so….funny!!

Algernon was a selfish, indifferent, immoral and cynical man. Like Jack, he too had an imaginary character called Bunbury, which he used every time he needed to avoid some events he disliked. However, unlike Jack, Algernon was so irresponsible and indifferent, that he stole Ernest’s (second identity of Jack) identity for his own interest, without slightest care to what that would have affected Jack. Algernon was also snob, his vanity of fashion and education was perhaps the perfect picture of Victorian society at that time (Wilde’s critics?).

What made him more similar to Wilde (which I also found in The Picture of Dorian Gray’s Lord Henry) was the nonsense and paradoxes he often said along the play.

“You never talk anything but nonsense.” ~Jack. 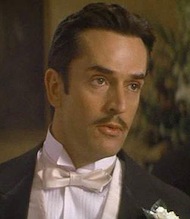 Other similarity with Wilde’s other work, Algernon was immoral and has unromantic and cynical (sometimes rather absurd) idea about love, relationship and (especially) marriage.

“It is very romantic to be in love, but there is nothing romantic about a definite proposal. The very essence of romance is uncertainty” ~Algernon

In short, Algernon was a man who was never serious, funny yes, but irresponsible and very selfish. Algernon lived for the pleasures, not for life itself; a kind of character I hate the most!

Posted by Fanda Classiclit at 7:00 AM
Email ThisBlogThis!Share to TwitterShare to FacebookShare to Pinterest
Labels: blog hop