Of all the characters in the ancient Indian mythology Mahabharata, Arjuna was always my favorite. Arjuna is the third of the Pandavas, and is one of the family’s protectors besides Bhima. From the graphic novel version I read, he is very handsome, the most handsome of the brothers, with well built body, the type that easily attracted women. I also believe he has a polite and elegant manner, a good personality to whom everyone enjoys his conversation. Arjuna is the son of Kunti with Indra (the lord of the heavens for sons), so he is a demigod, like all Pandavas.

In swordsmanship, Arjuna is most leading than all his brothers and of the Kauravas. He is perhaps a knight who has the highest skill among the universe. One day the heaven (or where the gods lived) was attacked by a strong and wicked enemy, and it is Arjuna who helped the gods to beat the enemy. For that, Arjuna was allowed to stay for few days in the heaven. From there he could be regarded as gods dear son, a human being whom the gods always protect. Well taught by Kunti, Arjuna—like all Pandavas—has a tender and noble heart, always eager to help others who are weaker and in need.

Woman is always his weakness. I reckoned that he at least married twice in the version I read, but in the original version he also married Draupadi, a woman he won at a competition whom he must share with his four brothers as Kunti’s request. His biggest ‘sin’ was when he was, at his young age, meditating in a cave in a dark forest. At that time a young queen was having a journey, and has been attacked by the forest villains. She ran away from her guards deeper in the forest and arrived at the cave where she—in her astonishment—found a handsome knight who was in his meditation. Out of terrible fear, she disturbed Arjuna’s meditation by her sobs and gentle touch that suddenly turned the young man on. He did not know that she was a queen, he thought she was just a beautiful girl in fright, and decided to seduce her. 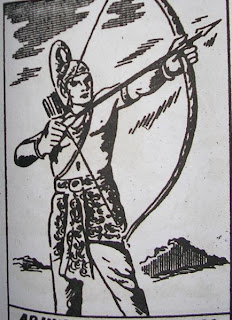 Arjuna agreed to help her on one condition, that she must do whatever he asked in return of the protection. The frightful queen agreed without much consideration, and Arjuna killed all the attackers. Arjuna who was already burnt with desire, despite the fact that the woman is a married woman and even a queen, kept seducing her to a degree of almost became a rape. The queen who was cornered, and in order to protect her pureness, threw herself down a cliff and would have died if her god mother have not helped her. And this is what I like from him, Arjuna deeply regretted his big mistake, and was at once confessed his sin in front of his brothers after he returned home. He was also willing to take all the consequences when the woman’s husband (a King) challenged him for duel, and was ready to die to compensate his deed. I always like men (or women) who made mistakes (for all human being must have mistakes in their life) but brave enough to confess it and to take all the consequences. That made Arjuna a real gentleman.

Arjuna was also a man with high persistency and discipline that made him good in meditating (that’s I guess what made him such a strong and skillful knight). When Pandavas were at trouble, he was instructed by Krishna to take a meditation to ask gods for invincible weapon which he would need to protect the Pandavas.

Arjuna has always respected his big brothers, especially Yudhisthira who was too weak as a leader and who was incapable of making decisions. At a crucial time when Krishna asked the Pandavas to demand the return of their kingdom from Kauravas, it was Arjuna—together with Bhima—who finally made the decision, while Yudhisthira could not make it.

Although it was not pictured in this graphic novel, I think (and I read about this in later series of Pandavas stories) Arjuna must have swollen with pride from his handsome appearance and being the best knight of the universe, despite of his efforts of being humble. I mean, he seemed to be quite humble in this epic, but I think it only makes sense that a man whom everyone regarded as the highest, must have this quality.

Note:
I picked Arjuna illustrations from the graphic novel I read, it is illustrated in Indonesian culture, so the fashion must not reflect the original appearance of Indian men on 500 BCs.

Posted by Fanda Classiclit at 7:00 AM
Email ThisBlogThis!Share to TwitterShare to FacebookShare to Pinterest
Labels: blog hop, Mahabharata