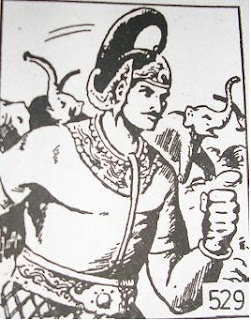 I think, besides Arjuna—who was always the celebritiy :)—Bhima is one of the most famous characters from the ancient Indian mythology: Mahabharata. Bhima was the number two of Pandavas, he was born from the same mother as Arjuna, Kunthi; however his father was Vayu (god of the wind). Bhima was the biggest among the brothers (actually he was more like a giant), with a rough and straight manner. He always carry a cudgel as his weapon, which fits his enormous body.

Though he was tender hearted and polite, Bhima did not have the elegant manner of a prince like Arjuna or Yudhisthira. When others sat at the palace hall, Bhima would choose to stand outside the room. He could never adapt with the formality in the palace, and actually was more fit with the lower classes people. Bhima was also an honest, straightforward and trustful person. He was quite an impulsive man, acting rather from his instinct than his consideration. With his enormous energy and his skill, Bhima would challenge everyone who insulted him or people he loved, almost without much thinking. One of his characters that I don’t like. 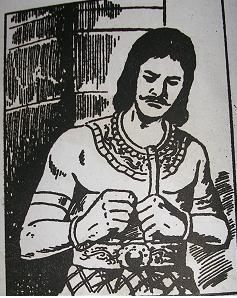 I suspect that Bhima had actually some passionate feelings for Draupadi—his sister in law, wife of Yudhisthira. When Draupadi was humiliated by Kauravas, Bhima seemed to be quite broken hearted. It was Bhima who—I noticed—responded to it with his gesture, while the husband and the others kept silenced and seemed to be resigned to their defeat. When Draupadi at their exile in the forest would like to have flowers to do her hair, it was Bhima who volunteered to search it. Can you imagine that Bhima, the invincible man who usually been seen with his cudgel roamed in the dark forest to pick flowers? But Bhima did not consider that as something ridiculous, he just wanted to please Draupadi’s heart, to show that he cared for her, because he could feel the humiliation she had suffered terribly.

I think, in his enormous muscles, there laid a tender heart of a man….

Posted by Fanda Classiclit at 7:00 AM
Email ThisBlogThis!Share to TwitterShare to FacebookShare to Pinterest
Labels: blog hop, Mahabharata