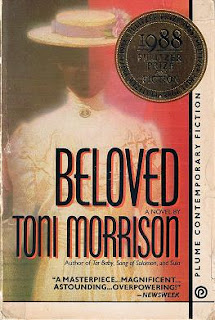 This is a bitter, powerful, yet beautiful novel about slavery in the South of America around the end of Civil War, or in the Reconstruction era. Beloved portrayed a devotional love of a mother towards her children which—when the worst, unthinkable terrifying situation was approaching—lead her to kill her daughter. Wait, do you mean she really killed her own daughter? How can you call that love? What kind of love is that—killing your own child? I know, before getting into the whole story, you will call it insanity, but wait until you finish it, you will understand why I could not condemn Sethe for committing such a cruel thing to her beloved daughter—whom she later did name Beloved.

Sethe had been through a lot of hard times during her slavery. Throughout the novel Morrison took us to see how white people had ill treated their slaves. Not only they tortured their slaves and took away their freedom, Beloved distinctly pictured how they dehumanized the slaves; so much that the slaves were even scared to love; that their definition of freedom was as simple as to be able to love and to have desires.

“To get to a place where you could love anything you chose—not to need permission for desire—well, now, that was freedom.”

The situation of Baby Suggs, when she was freed by her son, is more than sufficient to reflect what the slaves lost their entire lives. Baby Suggs and few of other characters in this book was fortunate to at last had freedom. But what about them who had lived their entire lives as slaves? And once they were free at last, how would they leave the dark past behind and take steps to the future?

And what Sethe must have endured here was so great—and I won’t write it down here explicitly, it was something you need to feel yourself—that she was determined to not let her children through the same path, ever. Morrison takes us to judge Sethe’s choice through other central characters—but mostly through Beloved, the victim.

Beloved is not an easy reading. Morrison takes us back and forth almost without any particular notice; through each character’s memory and point of view, the whole story is slowly and painfully revealed. It’s a bit strange and confusing at first, but you will get more familiar after few chapters.

I have read somewhere on the internet that Morrison based the story on a true account of a slave mother killing her children rather than having them be returned to slavery under the Fugitive Slave Act, so that they wouldn’t suffer being killed in another way. I don’t know whether it’s accurate or not, but one thing is sure: there is no greater thing in the universe, than love. Sethe killed her daughter not because she didn’t love her, but because she had never felt any kind of love most of her own life; and now—when she was finally able to love after so much sufferings—she would never give anybody a chance to take her children and let them suffer as she had.

Ah….I have tried so hard to picture my feeling through this review, but I guess I can never tell you how powerful this book had affected me and made me re-shape my definition of love. I will only close this review with an emotional dialog that will reflect the desperation and powerlessness of the slaves….

Five stars for Beloved. And special thanks to Nishita, whose review made me want to read this book, and to Joon Ann and Listra who were reading this book with me... 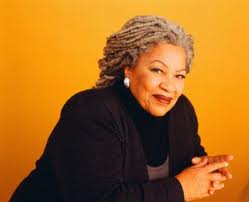 Toni Morrison is an American novelist, editor, and professor. Her novels are known for their epic themes, vivid dialogue, and richly detailed characters. Among her best known novels are The Bluest Eye, Sula, Song of Solomon and Beloved (won Pulitzer Prize for Fiction in 1988).

Born as Chloe Adelia Wofford in February 18, 1931 from a work class family, Morrison grew up as a fervent reader; Austen and Tolstoy were among her reading list. She married a Harold Morrison in 1958, but divorced in 1964. She wrote a short story about a girl who longed to have blue eyes, and the story later on developed into her first novel: The Bluest Eye (1970), which she wrote while raising two children and teaching at Howard University.

Beloved (1987) was her fourth novel and brought her to success. Not only Pulitzer, it also won American Book Award. In May 2006 The New York Times Book Review named Beloved the best American novel published in the previous twenty-five years. In 1993 Morrison was awarded the Nobel Prize in Literature. Her citation reads: Toni Morrison, "who in novels characterized by visionary force and poetic import, gives life to an essential aspect of American reality." She is currently the last American to have been awarded the honor. In addition to her novels, Morrison has also co-written books for children with her younger son, Slade Morrison. Toni Morrison is currently a member of the editorial board of The Nation magazine.