Robinson Crusoe was probably one of book characters with unique personalities to be analyzed here. It’s easy too, because from his journal, we can follow his life from the very beginning. Being born in a middle-class tradesman family, Crusoe has taught about trading business, a career that Crusoe’s father believed to be the best and safest career to have in the world. However—and this is the first sign of Crusoe’s stubbornness—Crusoe did not have any slightest interest towards business (any kind of it). I imagine Crusoe as a man who adored freedom; it’s not safety that he sought, but the charm of uncertainty, the wider possibilities that was not limited by rules and orders. And where could he find it if not in the sea? I think Crusoe has been born with adventurer soul in his heart; and nothing could prevent him to pursue his dream.

Throughout this book Crusoe often marked his stupidity because he did not follow his father’s advice, and runaway from home to become a sailor. However, I think it was not stupidity, and I never blamed him throughout this story, because what he has endured was merely a maturing process. If he had chosen to be a businessman, like his father’s suggestion, he would probably never have had such development in his entire life. And what is the most important development a man could reach if not finding the core of his life—which is God? 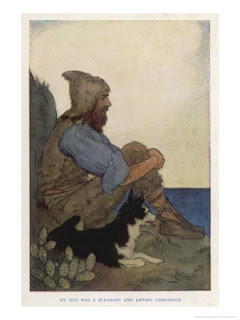 Crusoe's stubbornness was clearly pictured through his repentance. Being survived from several accidents in such ways that you could not have said that they were just incidents—still did not make him think of God at all. So, if Crusoe must fell in many dangerous conditions, it was not caused by stupidity, but his stubbornness. Even when he finally came to a supernatural understanding that God was behind those all occasions, it didn’t stay for too long before he forgot about it again. Then all the process was repeated again, he must fall into a tragedy, saved from it, realized that God was in it, then forgot about it as soon as everything was calm and settled again.

From his twenty eight years of living on ‘his’ uninhibited island, I see a strong will and determination in Crusoe. He never fell to desperation when he must make great efforts to produce simple things that he needed. Not even when he failed at his first trials (like when he made the canoe), he would somehow find the spirit to do it again and again until he got what he wanted. Here I think Crusoe was fortunate that he has his stubbornness in him!

Making decisions, though, was not one of his best qualities. I can see from several occasions that he often felt uncertain to do something. The clearest prove of this was when he must decide to attack against the villain who did cannibalism on the island’s beach. But maybe we can spare him on that one, because it was actually the battle between his conscience and his survival instinct (it’s a good thing if one still consult his conscience before committing his deeds, right?). Anyway, I can still see his uncertainty in making decisions in several other occasions.