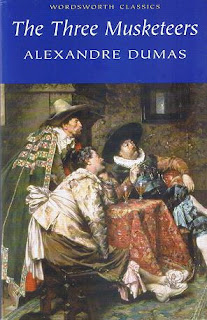 This is perhaps my third reading of Alexandre Dumas’ first installment of D’Artagnan Romances series: The Three Musketeers. I read it first as a child (the illustrated abridged version), then read it again several years ago in Bahasa Indonesia translation, and now I got the chance to read it in the English unabridged version, together with Melisa, Maria and Althesia. Surprisingly, even having been familiar with the main plot—especially with the cold-hearted Milady—I was still surprised by some little details scattered within this 555 pages, which I thought I have never known before. Or, was it because I have read Twenty Years After and The Man in the Iron Mask before this that made those details more sense? Maybe….

Anyway, this time I put more attention to the historical facts of this story, The Siege of La Rochelle—the war between France and England in 1627-1628 during the reign of Louis XIII—which I have neglected in, at least, my second reading. La Rochelle was the last city which was inhabited by the Huguenots at that time, and the Cardinal wanted to take it to entirely clean France from the remnants of Calvinism. But this war was also believed (at least according to this story) to be triggered by personal interests of Duke of Buckingham and the Cardinal—who both tried to gain Anne of Austria’s love. Yes! That’s what happened when two powerful people from two countries played at a high stake.

The third reading enabled me to see Cardinal Richelieu as an honorable gentleman, and not merely as an antagonist who would like to destroy the queen, as I perceived before. Even d’Artagnan and the three musketeers paid some respects towards the Cardinal, despite of their dislikes. Richelieu had a mixed feeling towards the four inseparable musketeers, he admired their nobleness, brave, and intelligence, but on the other hand, he would not rest easy while they kept intercepting and ruining his plans. His last interview with d’Artagnan grew my admiration towards the Cardinal.

Rereading this book has also given me chance to follow d’Artagnan from the very early of his career. I could see that the young Gascon had already been possessing courage, intelligence, witty and prudence, even when he was scarcely twenty years of age. One quality that marked his youth off his future life as an adult was his uncontrolled amorous passion. While falling in love with Constance Bonancieux, he could also cultivate a madly attraction to Milady. I am wondering whether, if d’Artagnan met Milady when he was more experienced in his career, would he still be fallen to her charm?

In The Three Musketeers, Dumas poured out all his humour and wittiness in describing his young musketeers’ adventures. He forced me to laugh out loud several times everytime the musketeers were teasing each other; at Aramis, for example, who would be blushing a great deal when the others could guess that ‘a cousin’ means a lady he was courting, and ‘money from selling poems’ came in fact from his lover, instead of a publisher who bought his writing. It was also comical how the musketeers could never save their assets very long; for example when they got four beautiful horses from Duke of Buckingham. Athos—whose weakness was in wine and dice—put the horses at stake, and lost his and d’Artagnan’s; Aramis—with his delicate heart—sold his in low price; while Porthos—well…this is the most hilarious—he made his horse to be delicious foods which the four musketeers enjoyed very much without realizing it at first (except Porthos)! LOL, this scene is very funny indeed! =))

And in that witty manner, we came to know each musketeers’ personalities and secrets. Athos has a noble manner and heart which was sometimes senseless, but he also suffered from a huge burden that made him often drawn in his somber mood, then passed his time in drinking. It was revealed in the end, that he was actually Count de la Ferre, who came from a high rank family in the kingdom, and had a dark history concerning his marriage with Milady. Aramis was a ‘beautiful’ gentleman who adored glamorous style, and had a divine passion to serve the Church as an abbé. It was revealed later that his passion in theology appeared not of any divine reason, but rather as a gloomy reason when his lover was abandoning him! Aramis was the most hypocrite from the four, and whose life was full of mystery and intrigue, but he has the most delicate style in diplomacy—one of the best of all. Porthos was a simpleton whose intellectual was perhaps behind the others, but he was a loyal friend, and of course as brave as others. Porthos was depicted as a handsome and well-built young man who adored high fashion and exquisite gourmets.

From the four, d’Artagnan was definitely the most intelligent one, although his emotional was too unstable to be their leader—we should give that to Athos instead, for his perfect calmness. It’s remarkable to see how the trust between the four was built up so quickly, one solid foundation to their true friendship. Everytime d’Artagnan rushed to pursue something urgent, the others would unquestionably follow his step, always believed that he must have a good judgement for that. And look how the three musketeers gave themselves up to d’Artagnan when they accompanied the Gascon to England for returning the Queen’s diamond studs—an incident which could have had triggered a war between England and France, even before the siege of La Rochelle, had d’Artagnan didn’t possess his iron nerve! What a brilliant and heroic rescue that was!

Although not the best from the series, The Three Musketeers has set a good base for the d’Artagnan Romances; it’s less serious, it’s historical, it’s witty, it’s really entertaining. Four swords—instead of stars :D—from me for the four musketeers. I know now why Dumas gave the title “three” musketeers instead of “four”, it’s because d’Artagnan is the center of the whole series, so it should be: d’Artagnan AND The Three Musketeers, d’Artagnan: Twenty Years After, etc.


One favorite quote of mine, from the last intriguing interview of d’Artagnan and Cardinal Richelieu, a passage which showed d’Artagnan’s noble and brave character—which basically represented all the four musketeers’ characters. This interview was very crucial, because it would fix d’Artagnan future (life or death), and this was d’Artagnan's answer for his ‘defense’….

“My Lord, I swear to you that I have not for one instant thought of defending my head against your eminence. I will submit to whatever punishment your eminence may please to inflict. I do not cling to life sufficiently to fear death.”

*I read the Wordsworth Classics 1993 edition*