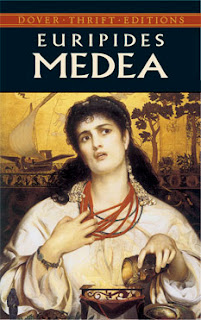 After having to skip last month theme for Let’s Read Plays, I have been looking forward to read a Greek play. It’s been few years since I have enjoyed read Sophocles’ Oedipus—translated in Bahasa Indonesia—the only Greek play I’ve ever read, and I had a good time with it. This time I picked a Euripides’ of Medea. It’s a quite short play, but a very strong one.

Medea was a princess of a barbarian land of Colchis. She abandoned her land and her family for the sake of a Greek man she devotedly loved, Jason. The play began with a prologue by the Nurse (Medea and Jason’s) who put the background of the play. Medea and Jason had been husband and wife with two sons, lived in Corinth. There—either for gaining place in the royal family, or merely for his lust on King Corinth’s beautiful daughter—Jason abandoned Medea to marry the princess.

Here, Euripides seemed to underline the disadvantages of being a woman, from Medea’s soliloquy:

Of all things upon earth that bleed and grow,
A herb most bruised is woman. We must pay
Our store of gold, hoarded for that one day,
To buy us some man’s love; and lo, they bring
A master of our flesh! There comes the sting
Of the whole shame. And then the jeopardy,
For good or ill, what shall that master be;
Reject she cannot: and if he but stays
His suit, ‘tis shame on all that woman’s days.

Medea told us what she thought about being a woman. A woman needed a man as a husband under some excessive price (I take it as a dowry). The man then would have control over her, yet, she could not be sure beforehand whether he would be good or bad; while she could not divorce him if he turned out to be bad, as divorcing would ruin her reputation. So either way, she must take that husband. And after that, the husband would take her to his home, a new place where she must adapt herself to whatever the condition, and must accept the husband as he was. If the marriage turned good, she would be grateful, but if it turned bad, she must want to be dead. Then, the husband might get bored to his wife, and began to seek entertainment outside; while a woman must be satisfied with one man only in her entire life, while bearing his children.

But Medea was not a melancholy woman, who accepted her unfortunate faith with bitter tears; she was spiteful and severely enraged by Jason’s infidelity. She was at last banished by King Creon of Corinth for making everyone frightful by her cold and cruel manner. In fact, she has murdered her own brother and has persuaded two sisters to kill their father before arriving in Corinth. Became more enraged with her banishment, she then prepared a most cruel and cold-blooded revenge to Jason, his wife and his father.

I had a mixed feeling while reading Medea; I enjoyed the plays structure, language and the emotional sense in detailed description. However I was a bit inconvenient with the vulgarity of the murder scene. Medea’s intense anger and the turbulence of her feeling were captured very vividly by Euripides, as if I was witnessing the action myself; and for me, it’s the most attracting point of this play.

Some people called Medea’s killing her two sons as madness, but I think it was more of a fight between her hatred versus affection—and in this case the hatred won. I don’t know much about madness, but Medea felt sorry for her children; she altered her decision from killing them and releasing them for several times, it only meant that Medea still have affection for her children.

Cold-blooded she was, I could not put the blame only on Medea’s part. I hated Jason more than Medea, for treating his wife so coldly. How clever he was in his reasoning of marrying King’s daughter, that he actually still loved Medea, and only marrying the princess as a chance to protect their family in their exile in Corinth; that Medea should be thankful to live in Greek instead of Barbarian country where she came from. Here Medea was right, if Jason honestly wanted to marry Creon’s daughter merely for survival, he ought to tell the truth to Medea. I agree with the Chorus, Jason deserved Medea’s punishment. If only she did not take his sons too in this revenge scene, I might have been more enjoying this play. If only after several times altering decision, the last one was departing with his sons to Aegeus’ country, I might have had more sympathy towards Medea.

In the end, I believe, Euripides has written it for purpose, as if to tell us how women—delicate their nature are—could be more cruel and stronger than men when you hurt them. And most of the times, it’s about infidelity in love. That’s why, beware you, men….!

Posted by Fanda Classiclit at 7:16 AM
Email ThisBlogThis!Share to TwitterShare to FacebookShare to Pinterest
Labels: BC, Euripides, Greek, Medea, Play, Tragedy