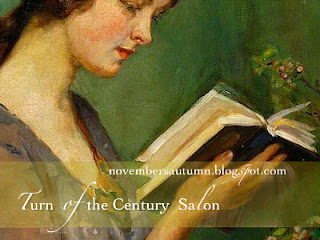 For the salon, I have read Mrs. Dalloway (here is my review, and here is what I've worked on for my WEM project). It was my first encounter with both Virginia Woolf and the self consciousness style, and I admit that I could not enjoy it as much as I have expected. Here are few inquiries from Katherine for the salon:

How would the plot of the novel had altered if it had been set in a different era?

The main plot would have not altered too much even if it had been set in a different era, I think. Yes, it is set right after the war, but the problems occurred to the main characters could happen too in a different situation. The general theme of Mrs. Dalloway was a search of life meaning and freedom, which is still relevant to these modern days, and I think, in the earlier centuries too.

What are some adjectives that define what you feel the book is saying?

Find a work of art or music within the same time-period that reflect the book and share it.

Email ThisBlogThis!Share to TwitterShare to FacebookShare to Pinterest
Labels: Mrs. Dalloway, Turn of The Century Salon