Clarissa is the heroine of Mrs. Dalloway, and she was in her middle age. At this stage of life, she began questioning her past decision to leave her ex-boyfriend Peter Walsh and married Richard Dalloway. I think Clarissa and Peter should have been made a good couple; they loved each other, and they understood each other very well. Often in their meetings, they knew what the other was thinking before they really said it. However, Clarissa was so afraid of uncertainty, that she finally chose Richard Dalloway who was more mature and settled than Peter.

Other reason why Clarissa left Peter, was because Clarissa didn’t like to be scrutinized by him. I think the thought of her boyfriend could read her mind and knew her too much had annoyed her. Clarissa seemed to be always hiding most of her feeling from public. She always wanted to be seen ladylike and quite descent in her high-class society. She was so afraid that she looked too old or too unfit for it (that’s why she was very sensitive to Peter’s unspoken critics). 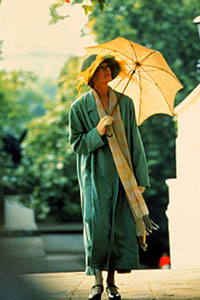 And in the middle of that fuss, Clarissa never thought about the true meaning of life. She just flowed with it, and enjoyed it. When she held a dinner party, for example, it’s just that she wanted to host a party, no other (more important) reason. She bought flowers for that occasion to feel younger and fresher. She was irritated when Richard was invited to a lady’s lunch without her—not that she was jealous I think—but because the lady did not appreciate her much to invite her. So, how people regarded her was the most important thing for Clarissa Dalloway.

In the end I think Clarissa began to think deeper than the only what in the surface. By beginning to reasoning her marrying to Richard, I think she began to see how she had prioritized status than love; the surface than what’s in the inside. And finally, Clarissa was forced to realize the mortality of human’s life. She was tried to be indifferent to it, blaming the young man’s death as reducing her party’s festivity, but in the end she must have realized that she too must think about it more seriously than just the glamour and glitters of the flowers, fashion and parties.

Posted by Fanda Classiclit at 7:00 AM
Email ThisBlogThis!Share to TwitterShare to FacebookShare to Pinterest
Labels: blog hop, Mrs. Dalloway