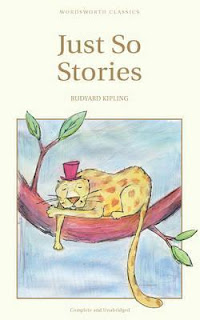 I think I owed The Classics Club for their The Classics Spin fun event on last February, where the spin picked the lucky number 14; and from my spin list, it goes to…. Just So Stories! Without the Classics Spin, I might have not picked that book for a long time, as I haven’t been a fan of children tales. Now I know that I have misjudged Just So Stories, and most importantly Rudyard Kipling—I’m really sorry Mr. Kipling! :).

Just So Stories contains of twelve animal tales, mostly about how they evolved until they are like they are today, and all were told in comical yet lyrical style. To add the amusement of the stories, Kipling drew illustrations for each story and slipped some informative pieces which sometimes are quite funny too. Well, smartly-funny to be exact. Here is one of the illustrations (picked from How the Rhinoceros Got His Skin). It’s not very special, really, but I was amazed by Kipling’s idea to put the Firaun’s cart-wheel into the illustration (the circular thing half buried in the sand at the bottom of the illustration)!

And to top them, Kipling provided a sweet bonus at the end of each story: songs! Or in this case, the lyrics only. And some of them were entertaining too, here’s one of my favorite, from The Cat That Walked by Himself. If you want to know how cats—being in the beginning solitary animals—could be pets nowadays, just read this story, you’ll see that funny it is, Kipling could portrait the nature of each animal very distinctly.

“PUSSY can sit by the fire and sing,
Pussy can climb a tree,
Or play with a silly old cork and string
To'muse herself, not me.
But I like Binkie my dog, because
He knows how to behave;
So, Binkie's the same as the First Friend was,
And I am the Man in the Cave.

Pussy will play man-Friday till
It's time to wet her paw
And make her walk on the window-sill
(For the footprint Crusoe saw);
Then she fluffles her tail and mews,
And scratches and won't attend.
But Binkie will play whatever I choose,
And he is my true First Friend.

Pussy will rub my knees with her head
Pretending she loves me hard;
But the very minute I go to my bed
Pussy runs out in the yard,
And there she stays till the morning-light;
So I know it is only pretend;
But Binkie, he snores at my feet all night,
And he is my Firstest Friend!”

You know, reading these funny stories suddenly made me wonder, what would Charles Darwin think/react when he have read these? :) Maybe one story that would satisfy him most is The Sing-Song of Old Man Kangaroo. Really, it could be a good way to explain Darwin’s theory to children (although I don’t have any clue what really made kangaroo hop long long time ago! :D). The Beginning of the Armadillos is also a kind of Darwinian theory about how hedgehogs and tortoises can turn to Armadillos. Moral lesson: people may change because of circumstances.

What would interest us as adults is that Kipling wrote these stories from his thorough observation during his journeys to Asia and Africa. Unlike most tales, Kipling wrote about nature, men, animals, and culture that really exist, and combined them with his imagination to turn into these amazing stories. Here and there he satirized about people too. In How the Leopard Got His Spots Kipling criticized us, adults, of often being too complicated with words for simple things:

Leopard: 'Where has all the game gone?'
Ethiopian: 'Can you tell me the present habitat of the aboriginal Fauna?'
(That meant just the same thing, but the Ethiopian always used long words. He was a grown-up.)

In another story, The Crab that Played with the Sea, Kipling even called Malayan people as “lazy”, as you can read in this: “You are lazy,' said the Eldest Magician. 'So your children shall be lazy. They shall be the laziest people in the world. They shall be called the Malazy--the lazy people.” And speaking about Malay, I found it very interesting that Kipling mentioned also my hometown, Surabaya (he called it ‘Sourabaya’) in the same story. One of the characters brought a kris (‘keris’ in Bahasa Indonesia) with him, a curving, wavy shaped dagger, traditional weapon in Indonesia. Kipling also mentioned about Indonesian tropical islands in this: “…He breathed upon the sand and the rocks, where they had fallen in the sea, and they became the most beautiful islands of Borneo, Celebes, Sumatra, Java, and the rest of the Malay Archipelago, and you can look them out on the map!” Thank you Mr. Kipling! :)

The most hilarious story is perhaps How the First Letter Was Written. It’s about how the first men first learned to communicate with others. In a comical way Kipling told us how drawings could be easily misinterpreted in written communication, but drawings could also be simplified to create letters which we now use as alphabetic. In short, Just So Stories is very entertaining and educating, both for children (of all age, provided that they can read) and for adults!

Four stars for Just So Stories, and for Rudyard Kipling!

I read the ebook version from this.