Turn Of The Century Salon April: Naturalism and Impressionism 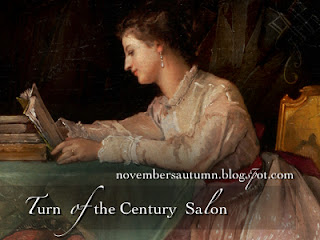 During April I read two books from Émile Zola for my Zoladdiction event; one of them is The Masterpiece, which relates quite a lot about the turning of the century, or specifically pointing to the birth of Impressionism. Zola was one of several young artists in Paris who originated the new wave of arts. Having been saturated by the “dark and grim” Romanticism arts, these energetic young men (Zola, Paul Cezanne, Claude Monet and Edouard Manet were among them) introduced more natural, bright sunshine into paintings. I am quoting a few passages from the book, which I believe was Zola’s own thoughts.

“…Courbet’s “black” painting is already beginning to feel rusty and reek of a musty studio where the sun never enters… Do you see what I mean? Perhaps that’s what we need now, sunlight, open air, something bright and fresh, people and things as seen in real daylight. I don’t know, but it seems to me that that’s our sort of painting, the sort of painting our generation should produce and look at.” ~The Masterpiece, p. 37.


Impressionist painting characteristics include relatively small, thin, yet visible brush strokes, open composition, emphasis on accurate depiction of light in its changing qualities (often accentuating the effects of the passage of time), ordinary subject matter, inclusion of movement as a crucial element of human perception and experience, and unusual visual angles. [wiki]. And Claude Monet with his painting “Impression” has inspired the name of the new style: Impressionist.

Not only in paintings, Zola believed that the naturalism and impressionism should occur also in other branches of arts: music, sculpture, literature, and architectural.

“Surely all the arts were intended to march forward together, and the process of change which was taking place in literature, painting, and even music, was going to lead to a renewal of architecture too. If ever there was a century in which architecture should have a style of its own, it was the century shortly to begin, the new century, new ground ready for reconstruction of every kind, a freshly sown field, the breeding ground of a new people. Down with the Greek temples, down with the Gothic cathedrals; belief in legends was dead! Down too with the delicate colonades and the intricate tracery of the Renaissance, that Classical revival crossed with medieval art… What was wanted was an architectural formula to fit that democracy, the power to express it in stone, building which it could feel to be its own, something big and strong and simple, the sort of thing that was already asserting itself in railway-stations and market-halls, the solid elegance of metal girders, developed and refined still further, raised to the status of genuine beauty, proclaiming the greatness of human achievement.” ~The Masterpiece, p. 139.

Zola also emphasized the condition near the end of the century with a vast rebuilding scheme took place, which also touched the land prices and many people attracted in investments. In short, Zola portrayed the early decadence of the society at the end of the 19th century through The Masterpiece.

“We are living in a bad season, in a vitiated atmosphere, with the century coming to an end and everything in process of demolition; buildings torn down wholesale; every plot of land being dug and redug, and every mortal thing stinking of death. How can anybody expect to be healthy? The nerves go to pieces, general neurosis sets in, and arts begin to totter, faced with a free-for-all, with anarchy to follow, and personality fighting tooth and nail for self-assertion.” ~The Masterpiece, p. 359

Email ThisBlogThis!Share to TwitterShare to FacebookShare to Pinterest
Labels: The Masterpiece, Turn of The Century Salon