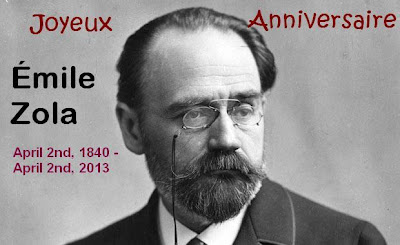 On this date, 173 years ago, a baby boy was born in Paris. He was named Émile François Zola, the only child of an Italian engineer. “Zolla” in Italian means ‘cloth of earth’. He was four years old when his father died, leaving his mother as a widow with meager pension. His mother prepared him to have a law career, but Zola failed in his Baccalauréat exam. Before entering journalism and beginning his writing career, Zola worked as clerk in shipping firm and in sales department of a publisher. Among his first published works is Contes à Ninon, published when he was 24 years old. When the publication of his next semi-autobiographical novel: Claude’s Confession (1865) caught police’s attention, the publisher office fired him.

Zola’s first major novel was Therese Raquin (1867). In his 28 years of age, Zola started to build the complete layout of his future series of novels traces the "environmental" influences of violence, alcohol and prostitution which became more prevalent during the second wave of the Industrial Revolution during the second empire of France. Les Rougon-Macquart was the title of the series, depicted—or rather examined—two branches of a family: the respectable (legitimate) Rougons and the disreputable (illegitimate) Macquarts for five generations. Zola: "I want to portray, at the outset of a century of liberty and truth, a family that cannot restrain itself in its rush to possess all the good things that progress is making available and is derailed by its own momentum, the fatal convulsions that accompany the birth of a new world."

During the Franco-Prussian War in 1870 Zola and his newly married wife, Alexandrine moved temporarily to Marseilles. And during that period, Zola worked as journalist for several different newspapers. Right after that Zola began to write his Rougon-Macquart series.

The complete twenty series of Les Rougon Macquart (the years are years of publication):


During those years, Zola had became a political reporter (1871); held his First Impressionist exhibition (1874) and Second Impressionist exhibition (1876); took Jeanne Rozerot as his mistress; got a baby girl from Jeanne, named Denise (1889); got a baby boy—Jacques—also from Denise (1891). On 1894, at the same year that Alfred Dreyfus—a Jewish artillery officer in French army—was found guilty by a court martial, Zola published his first novel of Three Cities trilogy: Lourdes. It was followed soon by Rome on 1896, and Paris on 1898.

On January 13th, 1898 Zola published his article J’Accuse in defense of Dreyfus who was wrongly convicted as treason which was caused by anti-semitism in the highest levels of French Army. J’Accuse was an opened letter addressed to the President of the Republic which was published in the front page of L’Aurore newspaper. By publishing J’Accuse, Zola has brought his career to a major risk. On the other hand, as Zola was a leading French thinker at that time, J’Accuse formed a major turning-point on the affair, and it had divided France deeply between the reactionary army and church and the more liberal commercial society. The article is also widely marked in France as the most prominent manifestation of the new power of the intellectuals (writers, artists, academicians) in shaping public opinion, the media and the state.

Zola was brought to trial on 7 February 1898 and was convicted on 23 February; however he fled to England rather than went into jail. After his return to Paris, Zola immediately published first novel in his new series Four Gospels: Fecundity (Fécondité); followed by Toil (Travail) on 1901. The third novel, Truth (Vérité) was published posthumously in 1903, while Justice would have become the fourth if only Zola have survived then to finish it…..

J’Accuse was proved to bring huge risk to Zola, as he was found dead on September 29th from carbon monoxide poisoning caused by an improperly ventilated chimney. Decades later a Parisian roofer claimed on his deathbed to have closed the chimney for political reasons, which was believed to be instructed by Zola’s enemies. He was buried in Montmartre cemetery; however on June 4th 1908 his remains were relocated to the Panthéon, where he shares a crypt with other French big authors: Victor Hugo and Alexandre Dumas.

It was a kind of mini biography of Émile Zola, one of the most prominent contributors of Naturalism in 19th century and a major figure in the political liberalization of France. Looking at his bibliography, I was amazed by how productive Zola had written his books; he published one book every year on average, to say nothing of his persistence to write the twenty novels of Rougon-Macquart series based on his layout for twenty years! Zola wrote each of his books after thorough researches to describe the settings in details. For Germinal, for example, he went to a mining, interviewed the miner and witnessed their risky lives, and examining their livings. No wonder, we would feel as if we were presence in every scene of his books.

In comparing between his work and Balzac’s, Zola said: “I don't want to describe the contemporary society, but a single family, showing how the race is modified by the environment. (...) My big task is to be strictly naturalist, strictly physiologist.” Jim, one of Zoladdiction participant, posted an interesting analysis over the taxonomy aspect in Zola’s Rougon-Macquart series. If you could not decide which book you should read first at a start, or whether you must read them in publication order or not, Jim’s post would help you to consider. For you who, like me, decided to read in random order, the post provides information you need to know in order to see Zola’s whole perspective in writing the series.

I am a fan of Zola, although I have only read three of his novels so far. That’s why I host the Zoladdiction event, to encourage myself to read more (and to buy more in the end) of Zola. I plan to read at least all of the twenty novels in Rougon-Macquart series, and hopefully all the others too.