Katharina in The Taming of The Shrew: Character Thursday (57)

Katharina is the eldest daughter of Baptista, a gentleman of Padua, who represented women’s despair at the time Shakespeare wrote this play: The Taming of the Shrew. Katharina was a shrewd and scornful young lady; she was famous for that, and that made her difficult to get a husband. I don’t know which one must have come first, whether young men were terrified of her because of her bad reputation, or her shrewdness came from worrying because no young men had made any approach to her. But I think, it’s her own nature that made her different from other girls of her age.

There’s no doubt that Katharina was an intelligent, smart and independent woman; and she had just lived in the wrong era. Katharina would be happier if she has lived in modern era, where women have an equal opportunity to pursue her dream and to decide what she’s going to do in life by her own. In her era, Katharina suffered from the injustice the society had put on women. Then, a woman must put her future in her parent’ hands to get her a husband; as if getting a husband was a matter of life and death for a woman. And what her life would be in the future would depend on what kind of husband they would get. A marriage (with all the dowry aspects) had become a kind of business, don’t you think? 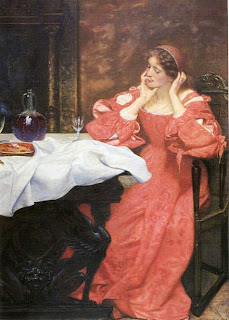 I imagine Katharina as an independent and self-esteemed woman who was confined by the values set by the society, that a woman should be sweet, shy, fool and submissive in order to attract men. I could feel how Katharina longed for having an equal relationship with men; how she would love to share her opinions on things which men usually discussed: politics, social, literature, etc. In the despair of not being able to do that, Katharina must have felt lonely and desperate. Then the shrewdness began to appear. It got worse because Katharina hasn’t found any men who would propose her because of her temper; while she knew that the only hope to get more freedom was when she has got married. Those tortured Katharina even more, and her tongue got sharper and sharper. 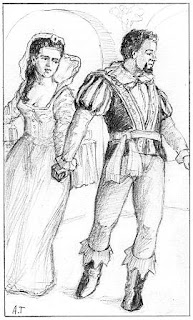 What’s more interesting is the ending. After Petruchio married her, Katharina has completely changed. Do you think she was afraid because Petruchio could become sharper than her? I guess not, it’s because Katharina came finally to realize that there’s nothing she could change in her life. She lived in the wrong world, and what she could do was either take it or leave it. She had chosen to be happy by accepting her role as a wife, and thus seemed that she had been tamed by Petruchio. Well, it might be true in one point, because Petruchio knew better than anybody else, that the shrewdness in Katharina came from unhappiness. And when he made her see the reality, Katharina was too clever not to change herself.

Email ThisBlogThis!Share to TwitterShare to FacebookShare to Pinterest
Labels: blog hop, The Taming of The Shrew