The Taming of The Shrew 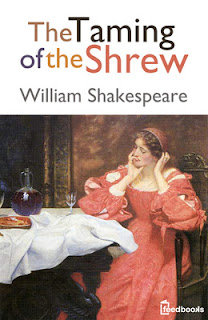 After being touched by a Greek tragedy on last March, this month we ought to read a Shakespearean comedy for Let’s Read Plays. The Taming of The Shrew has been my choice since the beginning of this event, and now I’m glad I have chosen it. It is perhaps the most satisfying and entertaining comedy I’ve ever read so far (the other was The Merchant of Venice, yet it didn’t feel like comedy in the end). This play uses play within a play structure, and the play within has a much bigger portion than the opening one, that you might even forget that you were inside another play when the whole plays ended.

A drunkard tinker named Sly was asleep outside an alehouse when a Lord and his group passed by in their hunting. Seeing Sly, the Lord had an idea to bring the drunkard secretly home and treated Sly as if he was a rich Lord. The Lord made a serious effort of mocking Sly, he even invited a group of players to play a fine comedy to entertain ‘Lord’ Sly. And here was the original play….

Gremio and Hortensio were both suitors of Bianca—a fair lady, daughter of Baptista, a gentleman of Padua—however they could never won Bianca, as Baptista won’t let Bianca marry before her elder sister—a shrewd lady named Katharina—got a husband. Gremio and Hortensio then raced to find a husband for Katharina to achieve their goal.

Lucentio also fell in love with Bianca, and to compete with Gremio and Hortensio, he would disguise as a school-master, so that he could court Bianca while teaching her. On the other hand, Hortensio’s friend Petruchio was looking for a rich lady as a wife, and liked the idea of taking a shrewd lady. Then Hortensio, Gremio and Tranio—Lucentio’s servant who disguised as his master—decided to support Petruchio’s expenses to woo Katharina.

So, when Lucentio, Hortensio (disguised as a music teacher for Bianca) and Gremio were competing to win Bianca’s heart, Petruchio was in a harder mission to tame the shrewd Katharina. The most entertaining part came from the way Petruchio tamed the shrew. Shakespeare, as usual, was a genius in making us laugh by words-playing—and that’s why it is hard to translate most of his comedies in other languages, because English have so many words with double meanings, that when you just translate them as it is, there might not be any comical situation left. And here is one of the words-playing from Katharina and Petruchio:

And this is another one (rather more slapstick than smart, actually) from Petruchio and his servant Grumio when they were in front of the door of Hortensio’s house, and Grumio mistakenly thought he was instructed to knock down his master instead of knocking the door for him:

As most of Shakespearean comedies, the wittiness of his plays came also from the complexity of disguising situation; the misunderstanding caused by it and how they were revealed. And as you might have guessed from the title, Petruchio finally succeeded in taming Katharina. But it’s not the end result which was important, but more on the process itself which was smart, comical, and acted as a satyr to reflect what women suffered during that era.

From Katharina we can see how an Italian young woman at that time, no matter how smart and ambitious she was, did not have any choices for her future besides waiting for her parents to get her a husband, and all around the complicated of dowry businesses which I have never understood… :) In short, women could not pursue her own ambition and to be distinguished in the society by herself; and without a marriage, there would not be any future for a young woman. I think this injustice which has made Katharina the shrewd she was. From her smart conversations with Petruchio, I believe she was actually a very smart woman, but she was forced to get marry very soon by her parents.

Four stars for The Taming of the Shrew.

39th book for The Classics Club

Posted by Fanda Classiclit at 7:19 AM
Email ThisBlogThis!Share to TwitterShare to FacebookShare to Pinterest
Labels: 16th Century, Comedy, Italy, Play, The Taming of The Shrew, William Shakespeare