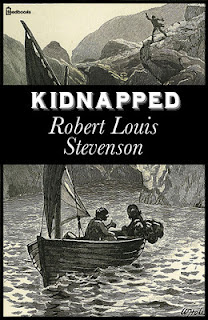 Right after reading few chapters of Kidnapped, I instantly saw the similarity with Treasure Island. The strange thing is, I totally forgot at that time that Treasure Island is also Robert Louis Stevenson’s adventure story! No wonder that those two are so alike, although Kidnapped is much more than just an adventure story.

David Balfour is a seventeen year Scottish lad that has just become an orphan. It was at 1751, when Scotland suffered from the dispute between the Lowlander and Highlander (Jacobites). His dead father left him a letter and instruction to be brought to the house of Shaws, who appeared to be David’s uncle. Imagining that he was having a situation there, Ebenezer Balfour treated him badly; he tried to murder him but failed; then he conspired with a captain of a brig to kidnap David and sell him as a slave. All was done so that David could never touch his inheritance.

David was a prisoner on board of Covenant, a brig of the villain Captain Hoseason and his gang. He saw the injustice and even a murder done by them. Fortunately, another ship wrecked, and a survived gentleman was taken into Covenant. The gentleman was a Highlander and enemy of the Campbell (King’s agent), called Alan Breck Stewart. Having overheard the Captain and the crew’s plan to murder Alan, David made an alliance with Alan to fight them back. Unfortunately the ship wrecked, and David, separated from others, was washed ashore in the inhabited isle of Earraid, where he cast away for several months, but then managed to return to the land.

Reunited with Alan, David accidentally witnessed the murder of Colin Roy Campbell, and wrongly accused. So now, Alan and David, having come from different clan (David is a Lowlander) were now in the same ‘ship’. Through difficulties and dangers they both fled. And through this journey and adventure, an intimate bound of friendship was built upon David and Alan. The question is, how would it end, considering that they were supposed to be enemies?

One most interesting aspect of this adventure story is the historical setting and facts. Many of the characters (especially those involved in the dispute of Lowlander and Highlander) were really exist in the history of Scotland, including Alan Breck himself. Through David’s eyes, Stevenson brought us to witness and learn one of Scottish histories during the Jacobite rising. Another strong point that makes Kidnapped not an ordinary adventure story, is the Scottish atmosphere that we’d find throughout the story. I was having difficulties of understanding many Scottish idioms and dialect in the first chapters, but along the way, I began to be familiar with it, and I think, overall, the Scottish nuance has added a unique value to this book.

One thing (and an important one, at least for me) that didn’t fit my expectation is the ending. Adventure stories, just like mysteries, used to have a conclusive ending. Anyway, adventures’ pace is set such that it will reach climax at the end, and that—I believe—is the chief point of writing an adventure story. Unfortunately, Stevenson did not provide that conclusive ending for Kidnapped. I read elsewhere that there are two possibilities: 1) Perhaps Stevenson was worried that his ending might contradict the history; or: 2) Kidnapped was planned to be followed by a sequel; and thus the hanging ending was applied to curious the readers.

Whatever the real reason, the ending is so dissatisfying and so abrupt that at first I was suspicious that my ebook was corrupted or something. Well, it was clearly what Stevenson has put is the real ending, and it forced me to take back a half star from the rating I originally gave this book. Three and a half stars finally, for Kidnapped, and I really wish it has a better ending!....

Posted by Fanda Classiclit at 7:25 AM