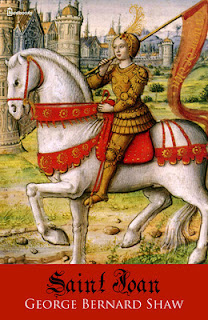 There are so many plays I had wanted to read for this last freebie month of Let’s Read Plays; but at the end I picked George Bernard Shaw’s Saint Joan. And what a perfect choice I’ve made! I loved Joan, I loved the play, and I loved Shaw’s writing, right from the beginning.

Shaw opened the play from Robert de Baudricourt’s farm, whose hens have been failing to produce any eggs for several days. His men believe that a maid who has been stubbornly stay there was the culprit. The maid is Joan—a peasant girl who asked Baudricourt to equip her with arms and suits, and send her to raise a siege in Orleans during the Hundred Years’ War. How can a seventeen year old girl want to go to a war? Joan isn’t an ordinary girl, for she is chosen by God for the mission. She claims to hear voices of St. Catherine, St. Margaret, and Michael the Archangel, that God has sent her. Something in Joan moves Baudicourt to provide what she wants, and right after that, a miracle happens, the hens laid eggs, and that convinces Baudicourt that Joan is indeed guided by God.

Joan goes to the Dauphin, the young Charles who is waiting to be crowned. Joan wins Charles’ heart; she encourages him to send her to lead his army. He equips and sends her to the battle. In the battle another miracle happens after Joan’s arrival, ensuring Dunois—the chief commander—to let The Maid to lead the army. They win the battle, and Charles is coroneted as King Charles VII. It’s from this battle that Joan is nicknamed The Maid of Orleans. Unfortunately, there are many people who dislike Joan’s conduct. The landlords and the Church authorities have their own reasons to stop Joan’s mission, and so she is captured at last and brought to trial for heresy. As we all know, Joan was then accused of committing heresy, and burnt on the stake as her execution. However, twenty five years later a new trial was being held, which cleared the heresy accusation. Joan then canonized as Saint in 1920.

Retelling a known history might not be an easy job, but Shaw has done it very beautifully. Although we already know the plot, it is very enjoyable to read the play. Joan’s warm, innocent, honest and blunt character is the soul of the play. She made us see what is needed to be God’s servants: humility. Because it is when we are free of personal ego, that God could fill our soul with divine things. The Church authorities in this play are busy with rules, gospels, laws, and doctrines, that they forget what is most important for the Church, that is God’s voices. It is instead in an ordinary peasant girl that He pleased to grant it: Joan.

Although she is only a peasant girl, and never had the opportunity to learn theology or things like that, Joan could match the Chaplain, Bishop and Archbishop’s arguments when debating about God’s voices. For Joan, God’s will is above everything, so no matter how strange His instruction is, she would follow without asking. The intellectual men, on the other hand, are proud with their knowledge and ability, that when they see something they don’t understand, it obviously comes from the devils.

Like I said, this play is very enjoyable. The dialogs are lively and full of emotion; the plot is smooth; and Shaw’s description of the scenes and settings are very clear, as if we are watching the play being performed on stage. Although it is a tragedy, Shaw could be quite funny at times that is enough to make you smile. I like to read Joan’s innocence; her dialogs are sometimes naïve, funny, but also full of virtues. The ending is quite surprising; I won’t even believe that there would be ghosts in a saint story if I haven’t read this play. But I think it just emphasizes the main theme and adds the irony; a perfect way to conclude the whole tragedy. The soldier’s appearance in the ‘ghosts’ conference’ is also quite hilarious! ;)

Five stars for Saint Joan, and it made me want to read Shaw’s other plays. You can also read my deeper analysis of the play here and here.

Posted by Fanda Classiclit at 7:20 AM