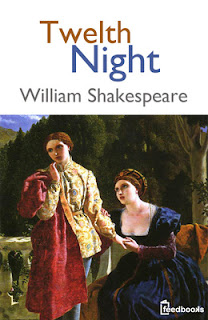 Orsino—Duke of Illyria—is wooing Olivia, a lady who is in mourning of her death brother and doesn’t want to meet any man. Meanwhile, Viola—also a lady—is stranded in Illyria as her ship wrecked, separated from her twin brother who was at the same ship before the wreck. She wants to hide her identity, so she disguises as a man and serves as Orsino’s attendant, Cesario. As she becomes the Duke’s favorite, Orsino sends her to woo Olivia for him, which is hard a task for her as she is actually in love with her boss. The plot becomes much more complex when Olivia rejects the Duke but falls in love instead with the messenger (Viola in disguise). Meanwhile Sebastian—Viola’s twin brother—has actually landed on Illyria too; and as he is Viola’s twin brother, it’s hard to distinguish one from another; and that adds to the complexity of the misunderstandings.

As always with Shakespeare’s comedies, this play is about misunderstanding, disguising, and coincidences. There are the ladies and gentlemen, but also the losers (Sir Toby Belch and Sir Andrew Aguecheek), and of course The Fool who is often cleverer and wiser than the others :). I’m not a fan of comedy, but this one was quite enjoyable as a light reading. However, I still cannot appreciate some vulgar humors of Shakespeare (and maybe I’d never do) in this play.

One character that annoyed me is Maria. The way she’s playing at Malvolio is, for me, too much. Maybe Malvolio deserves to be given a lesson by his colleagues for his haughtiness, but to false your boss’ handwriting to insult your colleague is ‘grossness’—the word Maria used to describe Malvolio’s appearance: “For there is no Christian that means to be saved by believing rightly can ever believe such impossible passages of grossness. He’s in yellow stockings.” And why must she use Christianity to compare such silliness? Ridiculous and not funny at all!

I think the cleverer of them is Viola, and her dialogue with the Fool in Act 3 Scene 1 is very interesting. From the whole play, this scene is my favorite. I enjoyed the Viola-Fool dialogue, and also Viola (Cesario)-Olivia scene where Olivia is clearly attracted to Cesario, and how Cesario feels awkward about that. It’s funny really, when you see it being presented on stage. It’s funny that Olivia didn’t see how Cesario reacts (her body language most of all) just as women do. See here (it becomes more interesting because they staged it outdoor):

Three and a half stars, for I enjoyed the play, although it’s not too special.

P.S. I still don’t understand, why this play is titled Twelfth Night? Are the scenes really stretched in twelve nights?

Posted by Fanda Classiclit at 8:13 AM