The Earth by Émile Zola 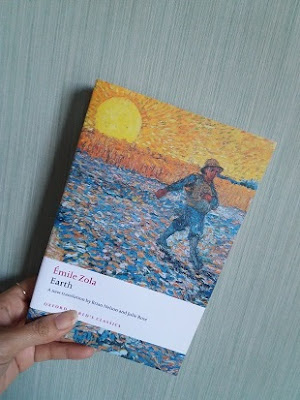 Brutal and violent! Zola is all out in this fifteenth novel of The Rougon Macquart cycle. I can feel how Zola’s love for his land was woven into an intense and emotional novel. And the blow! His crude way in telling the story really surprised me this time—the brutal rape and murder scenes… particularly the last one (yes, there’s more than one murder!). It really haunted me for few days.

Jean Macquart made his first appearance here (he will return in The Debacle), as an itinerant farm labourer on a small village, Rognes. Just like Etienne Lantier in Germinal, Jean was an outsider who became involved with Rognes peasants, particularly with the Fouan family. It all began when Old Fouan, being too old for working the land and longing for peaceful old age, divided the family’s land equally to his three children. From that day on the greedy children tirelessly scrambling over the ownership of even a strip of land, while ruthlessly abandon their parents to poverty and sorrow.

Here Zola highlighted the stubborn, blinded love towards the earth which then led to greed and savagery, even towards their parents and siblings. I can only imagine, when this book was first published, how shocked I were have I lived in the nineteenth century! No wonder some has regarded The Earth as one of Zola’s finest achievements, comparable to Germinal and L’Assommoir. I agree! The lyrical prose is still beautiful in some passages, but, at least for me, the severe of “the blow” is just second after L’Assommoir.

Posted by Fanda Classiclit at 2:12 PM