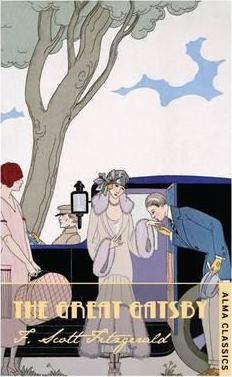 I am participating in this exciting readalong at Hamlette’s. It officially started on June 1st, but I have had an early start about ten days ago. It is that I will be moving to a new apartment during June, so my reading pace might be slower this month. Another reason, my new books (two accompany books of The Great Gatsby) were so tempting, that I couldn’t stop myself from reading it! So, yeah, I’m stealing the start—sorry Hamlette! J

Following recommendation in the preface of Careless People, I decided to read The Great Gatsby, Careless People, and So We Read On simultaneously. Following Gatsby, Sarah Churchwell also divided Careless People into nine chapters, developing her investigation of events around Fitzgerald, following the story development of Gatsby. She even titled the chapters according to Fitzgerald’s original outline list for writing Gatsby. I had also taken a glimpse of So We Read On (the Introduction)—it provides another side of background history of how Gatsby was produced. But for Gatsby, I decided to put double efforts. First I will read first chapter of Gatsby, then consulting the same chapter of Careless People, and some pages of So We Read On. Then I will use the insight information from both books to go back to Gatsby again. That way I hope to be able to understand more on the making of The Great Gatsby, and what has made Gatsby that great.

In this part, I will share what I got from Careless People and So We Read On, or any new perspective on Gatsby, which I have got from both book.

Careless People
Nick Carraway is personification of Scott Fitzgerald in Gatsby. The resemblance is uncanny—in personal character (judgmental); in their way of thinking (luxury lovers, but also moralists who criticize its damaging effect).

In 1922 (the year Nick moved to Long Island), Scott Fitz also moved from Middle West to Manhattan. Several months later, there was a scandalous murder of an adulterous couple (Hall & Mills), which, Sarah Churchwell believes, has inspired Gatsby. Other events that might have inspired Fitzgerald: a car crash which has killed Charles Rumsey (celebrated Polo player—an “old money”), and the arrival of a shady businessman called Tommy Hitchcock who has moved into their neighbourhood. Seems familiar, eh? J

Interesting point: What does the green light represent? Dream? Hope? Or the color of money? We might have more suggestions on next chapter.

So We Read On
There are so many themes one can find in Gatsby. This time (following Corrigan’s lead in the introduction of So We Read On), I will dig deeper into these specific themes:
- Social class
- God no longer exist

Speaking of social class, Gatsby IS other (half?) personification of Fitzgerald. Gatsby and Fitzgerald are both victim of social class distinction—they were “Mr. Nobody from nowhere” who struggled to belong to the “old money club”. Gatsby has got the money (through very hard working, and even bootlegging), yet not the breed.

1st chapter of So We Read On also speaks about water references or symbols throughout the book. When combined with Sarah Churchwell’s investigation about the confusion on the green traffic light around 1924, the famous ending of Gatsby’s 1st chapter—Gatsby reaching for the green light—could have a new meaning. I’m not too sure about this, but let’s see.

The Great Gatsby
Reading the above two books has helped me to understand more on what Fitzgerald has tried to tell us through this masterpiece, for which he had given his total effort. I began to see why Nick put Gatsby above all the rest, that “in the end, Gatsby is all right”, and furthermore, why “The Great Gatsby”. I have been wondering all this time, what is Gatsby’s greatness? He has a dream, works hard to achieve it—through shady businesses—but in the end still cannot reach it. Many people do that, even more honestly! But now I believe that the greatness lays more in the values that Gatsby (and Fitzgerald) believes. This is only my momentary reflection; I will come back to this later after completing the book. But this revelation excited me to delve deeper into this gem, and I can tell you that my admiration to Mr. Fitzgerald keeps increasing along the chapters!

How far have you been?

Posted by Fanda Classiclit at 2:21 PM