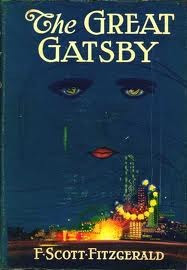 Chapter four and five are awesome! Chapter five, especially, as this is where Gatsby-Daisy reunion took place. They are short, but hey!...there are so many interesting things I want to share, that I decided to only pour out my thoughts on chapter four in this post, and will write another post for chapter five. Here are my personal notes from the book itself and two companion books that I am reading along with Gatsby.

Chapter four -- The big question that arose from Gatsby’s and Nick’s chatting on their trip to New York for lunch is whether Gatsby was boasting or telling the truth, when he told Nick about his background. Fitzgerald never told us the truth (what is exactly Gatsby’s business, for example?); Gatsby remains a mystery. I think some of what Gatsby told Nick might be true, but the way he boasted it made Nick think he’s lying. Fitzgerald also boasted often in parties he was invited. It’s rather touching to see them—“nobody from nowhere”—in their struggles to climb the social ladder, not to be regarded as nobody.

On the same trip to New York, Nick laughed when “some negroes in limousine rode passed them with haughty rivalry”. This is the second time I noticed a bit of racism in this book, but maybe at that time, it’s not counted as racism. It’s just to show how Fitzgerald—or the American—felt that the nation was on the brink of changes, and that “everything is possible”. The hearse that also passed them creates a dark atmosphere into this story—something I have not realized until Sarah Churchwell labeled Gatsby as “noir novel” in Careless People. And to think of how many tragic deaths that had happened or told in the story; not only of Myrtle, Wilson, and Gatsby, but also “Rosy” Rosenthal—apparently a real person—of whom Meyer Wolfshiem witnessed the shoot.

Careless People revealed to me that Gatsby and Daisy are inspired by Fitzgerald’s (unrequited) love story. Young Scott was in love with Ginevra King, one of the rising debutantes in pre-war Chicago. Ginevra rejected him and later married a wealthy young man from her own circle. Fitzgerald took it that she discarded him because he was poor. Only on my second careful read of Gatsby that I realized how Daisy’s feeling about Gatsby and Tom. On her wedding dinner she was torn between love and money (she chose love when “drunk like a monkey” but eventually picked money after cooled up and could use her logic).

I wonder about the final paragraph of chapter four: “Unlike Gatsby and Tom Buchanan, I had no girl whose disembodied face floated along the dark cornices and blinding signs...” What does it mean?