The Affair at Grover Station by Willa Cather: A Short Story #WCSSP2023 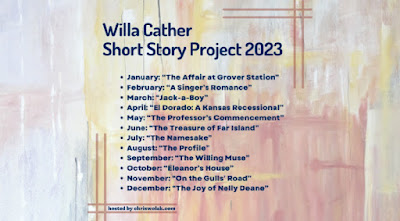 I've made a spur decision to join Chris Wolak's Willa Cather Short Story Project 2023. Well, I've actually been meaning to join since last year, but somehow haven't. This time I was more prepared. I've just found - and instantly bought - the e-book of Delphi Classics edition of The Complete Works of Willa Cather at Google Playbook, for under $2! 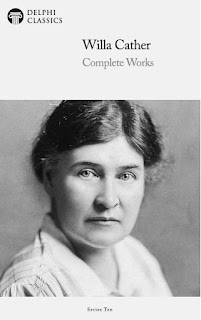 I was so delighted that all the 2023 stories are included in this copy, that I instantly joined in! For January we read:

**The Affair at Grover Station**
🔵 It is a story within story, or a frame story. A geologist met his college friend, a railroad clerk. Boarding on the train from Grover Station to Cheyenne, the geologist asked his reticent friend, "Terrapin" Rodgers (Terrapin = freshwater turtle = reticent), to tell a story about the mysterious murder of the Grover station agent.

About Grover:
"You know what Grover is, a red box of a station, section house barricaded by coal sheds and a little group of dwellings at the end of everything, with the desert running out on every side to the sky line." 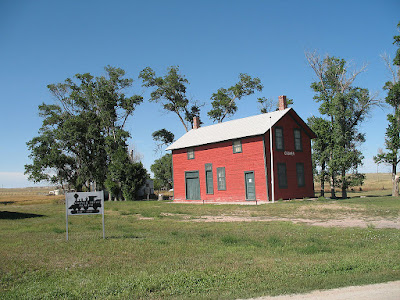 🔵 Larry, the victim, is Rodgers' intimate friend. He promised to come to the inaugural ball at Cheyenne, and dance with a girl he loved: Helen Masterson. He will take an extra (train) from Grover station right after his work's done. The ball started and finished, but Larry never appeared.

🔵 Feeling uneasy, Rodgers came to Grover Station, and there's no sign of Larry, either at the office or every train started from Grover last night. He's no where to be found.

🔵 Rodgers got info from a girl, who'd seen a stranger meeting Larry on that fatal night at Larry's office, and seemed to quarrel with him. From the girl's description, Rodgers felt sure that the man is Freymark.

🔵 Freymark is portrayed as a shady character. He has involved in a shady business when he's the railroad chasier clerk in Cheyenne, and it was Larry who's given him up, resulted in his discharge, and Larry took over the position. Moreover, Freymark was in love with Helen, but Helen chose Larry instead. On that fatal night, he also overheard Larry's plan which he's dictated over the radio to Rodgers. Therefore, there's no question that Freymark has had something to do with Larry's disappearance. But, where was Larry, and what had really happened?

🔵 Rodgers stayed the night at the station office that night, when lo and behold... Larry appeared in an apparition, giving his friend clues of the real event!

🔵 An inaugural ball, a dance, a murder, and a ghost, all happens in a lonely small town, surely promise an interesting story. And it is interesting! But what interest me most is not that. It is the racism shade in this story.

🔵 Freymark is a mix-raced, his father is French, his mother Chinese. He's "socially ambitious and extremely sensitive of his Asiatic blood after having been blackballed at a club." He then went to Europe and let people assume him as Jewish. At the inaugural ball, Larry's wounded dog entered the hall, threw himself at Freymark's feet and uttered a piteous howl. At this, Freymark was madly enraged and cruelly kicked the wounded brute across the hall. The way Rodgers describe the incident isn't something that I can easily forget:

"There was something fiendishly brutal and horrible in the episode, it was the breaking out of the barbarian blood through his mask of European civilization, a jet of black mud that spurted up from some nameless pest hole of filthy heathen cities."

🔵 Now, when faced with racism remarks or allusions in a book, I'm never sure whether it's the writer's personal view, or whether he/she is criticizing society racism views through the characters. Therefore, I won't jump quickly to the conclusion that Cather is a racist, but I found the passage really unsettling. It's not a mere generalization of a race (which ignorance could lead a writer to write innocently about). But to me "some nameless pest hole of filthy heathen cities" sounds full of hatred.

🔵 Again, I'm not sure it's Cather's personal view of Chinese race, but to include such hatred in her hitherto comforting books is quite shocking to me. In short, the racism has marred my enjoyment of the story, and I truly hope to be back to Cather's usual quality in next month's short story!