Isabel Archer in The Portrait of A Lady

Isabel Archer—our heroine—is a self-possessed young lady with independent mind. She has been comfortably living under her father’s protection, and her obsession was seeing more of the world and how people lived across from where she had been living: America. When she must live alone, Isabel was in the state of a writer who was facing a blank paper; eager to start filling it with his remarkable ideas, yet didn’t know what to write.

Her aunt, Mrs. Touchett brought Isabel to England, where her life would never be the same again. Inheriting some amount of money made Isabel felt free, free to reach her dream to widen her knowledge. She rejected two marriage proposals from two gentlemen because she wanted to fulfill her dream first. Then in her journey around the world, she met a man she adored. Ignoring everyone’s advises, Isabel married Gilbert Osmond, lived in Rome, and soon found that she had completely lost everything dear to her during the marriage. She had made a huge mistake!

From a lot of classics characters, I think Isabel Archer is the one to whom I most akin. Both of us praise freedom; freedom to be ourselves, to do what we like, and to sound our ideas. Unfortunately for Isabel, she lived in her era, when women were not supposed to live by her own. Well, the same thing applies nowadays—perhaps, in certain country with strong patriarchal culture—but it was much tougher for women in 19th century.

Other thing that makes me as if I’m seeing my own reflection on the mirror, is Isabel’s stubbornness (if it could be called ‘stubborn’) in not following others’ persuasive suggestions. In all occasions, when her friends persuaded her to do or choose something, Isabel always did the contrary. I share the same thing as Isabel, the harder people suggest us to take direction, the harder we stick to the other way. Why Isabel chose Osmond instead of Lord Warburton or Caspar Goodwood? Because Osmond never pushed her too hard (well—at the beginning, I mean; he changed a lot after they had married).

All in all, Isabel was a smart woman, she had her own ideas, and she was eager to express it. I think marriage would not be a danger if Isabel had chosen the right man. In her innocence, Isabel could not see behind people’s masks. And when she made a mistake, her pride prevented her to admit anything at all to her friends who cared about her. She preferred to swallow the bitterness by herself, she felt that she had done the mistake by herself—despite of their advises—so now she would not complain, not even to her husband who had made her suffered.

Isabel was a very strong and brave woman. Others would think her as stupid and stubborn, rejected other’s stretching hands to help her. But I can understand why she kept her bitterness to herself. Like I said, Isabel is very similar to me. You might call it pride or arrogance, whatever, we don’t care. We are strong women, we knew we’ve made mistakes—hey, who doesn’t?—but we didn’t like to be forced to confess it to everyone. We knew what you all would say: See, what I’ve told you? Or I know you’re unhappy, etc etc. Well, you DON’T know anything, so stop disturbing us; mind your own business. We would let you know when we need helps, but before that just leave us alone. 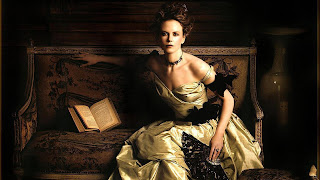 One thing I don’t agree with Isabel, of all her suitors, I wonder why Isabel could not see that Ralph’s love was the truest and deepest. Speaking about love, I don’t believe that Isabel really loved Osmond, I think she adored him, she was amazed by his noble thoughts and his knowledge. Ralph might be too humorous, but deep inside he was sincere. But then, Isabel was only a very young innocent girl. Girls like Isabel were easily fascinated by the world, not knowing that there are so many deceptions under the beautiful masks.

In the end, are we happy? If we were given another opportunity, would we take different path? I think the answer would be 'No'. Isabel Archer and I hold our principles, and leaving a husband, even if he hates us, is not something we would do in the first place. We know that life can be difficult, but we will get through all that. We are strong when we hold on ourselves and stand on our feet, others' interference would only weaken and confuse us.

Posted by Fanda Classiclit at 7:00 AM
Email ThisBlogThis!Share to TwitterShare to FacebookShare to Pinterest
Labels: blog hop, The Portrait of A Lady