Santiago in The Old Man and The Sea

Santiago is the main character in one of Hemingway’s masterpieces: The Old Man and The Sea—he was the old man himself. As a fisherman, Santiago lived poorly in Havana. His main assets were his boat and some fishing equipment as old as himself. Living by himself in his humble hut without family, I can imagine how hard it was for Santiago to compete with younger fishermen with—perhaps—better equipment and strongly-built muscles. But he had an advantage of long experience and strong determination.

I guess living poorly has helped Santiago to have his determination; if you have been struggling for your entire life to survive, you’ll be familiar with hardship to know that you must not fall in desperation when facing problems. Santiago has been sailing for 84 days without catching one single fish. A boy who has been his assistant was forced to leave him by his parents because they thought Santiago was an unfortunate man. Not only that, young fishermen started making fool of him, while the old ones looked at him with pity. But Santiago kept sailing and hoping that today he might catch something if God permitted him. 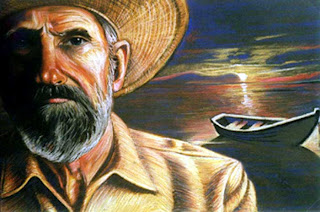 Everytime he had trouble to work by himself, he would remember and miss the boy—if only the boy was here—but he would soon throw away those thoughts; he didn’t like daydreaming because it would only split his focus. He always said to himself to not thinking about what he did not have, but to think of what he need to do and make plans. This is one of the reasons why I admire Santiago, while working alone by himself, he never lost focus; he was very discipline to himself.

More than that, I admire Santiago for his love for God’s creations—nature, animals. Men need to kill animals for food, but it does not mean that men have rights to cruelly treat the animals. Men were the highest creature on earth, but it does not mean they can disrespect animals. Santiago haunted the big marlin for days, he would at the end kill it, but during the process he treated the fish like an equal enemy—even as a company in the journey. Just like a boxer wanted to conquer his enemy, Santiago learned the marlin’s facts and characters, then made plan and strategy. 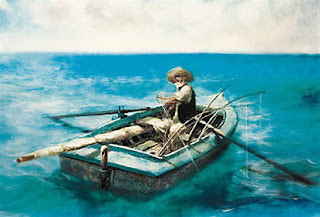 And when he finally conquered the marlin and tied its body on the side of his boat, and sharks came quickly to eat its flesh, Santiago enraged. Not only because the sharks were robbing his catch, but also because he felt as if the sharks had torn his friend’s body. He felt sad about it and sorry that he could not protect the marlin. Isn’t that remarkable? Santiago was only a poor fisherman, but he taught us moral values of living as a dignified human being.

Email ThisBlogThis!Share to TwitterShare to FacebookShare to Pinterest
Labels: blog hop, The Old Man and The Sea