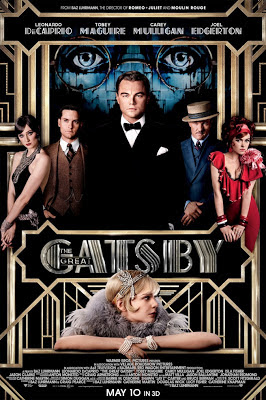 I don’t know which one is the truest; rereading the book for the second time has given me an advantage to enjoy the movie, or watching the movie has intensified my emotion as well as my understanding of the book. I believe it’s more of the second than the first one. The film has vividly showing the real emotion of all scenes from the book, which makes it easier for me to (more) understanding the book. Overall, the latest 2013 Baz Luhrmann’s adaptation of The Great Gatsby IS indeed Great!

I have no complaints for the main characters. First of all, Leonardo diCaprio is superb! He could perfectly transform into Jay Gatsby’s enigmatic character. Although his portion is perhaps three quarters of the whole film, I can feel the strong charisma of Gatsby distinguished from others. Gatsby as the glamour and lavish parties host; Gatsby as an awkward lover (who was between excited to reunite with his long-time lover and anxious that there would be anything wrong that could break his bubbles of hope); and Gatsby as a fragile man full of hope. And let’s not forget those ‘rare understanding smiles’ that Leo has presented dashingly while raising his glass: “He smiled understandingly—much more than understandingly. It was one of those rare smiles with a quality of eternal reassurance in it, that you may come across four or five times in life.” 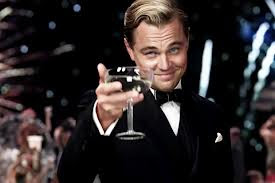 Carey Mulligan fits Daisy Buchanan’s character; she could represent the dreamy, spoilt and indifferent style of Daisy convincingly. Joel Edgerton is also good in performing the rough and brutal Tom Buchanan by his gesture and the way he speaks. Jordan Baker is the one who quite surprised me; Elizabeth Debicki performs beautifully as Jordan. Now I see why Nick is attracted to her. She is the most fasionable one here, and really...I love her stylish hats!

I was first curious about how Amithab Bachchan would play as Meyer Wolfsheim. Apparently, he can perform quite convincingly, if you don’t take quite seriously of the fact that Wolfsheim is a Jewish, of course! :D

Thank God Baz Luhrmann chose to stick mostly to the original story and plot of the book. And even if there are slight alterations here and there to make the movie smoother, I think they just make the story more convincing. In the scene of Gatsby’s murder, I know very well that—from the book original version—he was really alone at that time and no phone call was coming. However in the movie, a phone call comes when Gatsby is swimming, and when he is reaching his hand to pick the receiver, the deadly gunshot arrives. Both scenes emphasize both tragedy and irony of Gatsby’s death, but the movie version emphasizes them in a more dramatic way which suits well for a movie which gives Leo room to express his mixed emotion—from hope (of a call from Daisy); satisfaction (from thinking that it was from Daisy, while it’s in fact from Nick); to surprise, disbelief, disappointment, and maybe fear in few seconds before he finally collapsed to death. [Confession: my eyes were wet on this scene… :( ]

One particular scene has confirmed my suggestion; it’s when Nick is eavesdropping Tom and Daisy as Tom is convincing Daisy that everything is going to be alright, after the accident. This scene confirms my idea that Daisy has admitted to Tom that it was her who actually drove the car; and that’s why they suddenly flee from their mansion (and the butler’s lie to Nick seems to point out Daisy’s selfishness to only seek security on top of everything); a really brilliant alteration of the scene that’s just emphasizing the meaning.

I think the costume designers have done a great job to put the 1920s fashion into the movie. I like Jordan Baker’s style the most from the women, and of course….Gatsby’s suit from the men (except the pink one!). And of course Gatsby’s mansion and all the parties are gorgeous and entertaining, but still, my favorite is the characters and their emotions.

So, is it surprising you that I am giving this 2013 version of The Great Gatsby movie adaptation a 9.5 of 10 rating, old sport? :) Oh, and I think the idea that Nick has first typed his original script’s title as “Gatsby” and then later on adding “The Great” in handwriting is just topping all my feelings after the movie ends. Gatsby is great, the book is great, and this movie is great! Well done, old sport! ;)

I watched this for Books Into Movies Monthly Meme #5 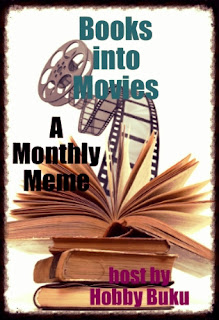 Posted by Fanda Classiclit at 9:34 AM
Email ThisBlogThis!Share to TwitterShare to FacebookShare to Pinterest
Labels: classic movies, The Great Gatsby