Being a rather outsider from Gatsby-Buchanans circle, Jordan Baker is one of the most interesting characters in this book—well, apart from Jay Gatsby, of course. Jordan is a professional golfer, and this makes her being in the circle of those glamorous wealthy people. She often attends Gatsby’s parties, and befriends with the Buchanans. But unlike Daisy Buchanan, she is not a kind of drama queen who is always fluttering, sighing and whispering. Jordan is firm, strong and self-esteemed (maybe her career makes her like that).

Her quality first appears when Nick arrives at Buchanans resident, where the wind blew up the white curtains, while Daisy and Jordan’s white dresses were fluttered and rippled by the breeze. I can imagine Daisy in this condition with her dreamy expression, while Jordan—through Nick’s eyes—was portrayed as “extended full length at her end of the divan, completely motionless, and with her chin raised a little, as if she were balancing something on it which was quite likely to fall.” 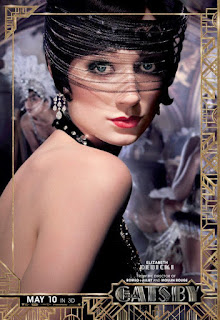 Later on it is also revealed through her relationship with Nick that Jordan has a tendency of cheating. That’s why she was attracted to Nick: “Jordan Baker instinctively avoided clever, shrewd men, and now I saw that this was because she felt safer on a plane where any divergence from a code would be thought impossible. She was incurably dishonest. She wasn't able to endure being at a disadvantage.” So I guess, Jordan is only attracted to Nick because with him she doesn’t have to wear her masks all the time. She might be the kind of person who always seeks for acknowledgment from others, she needs to be accepted in the sophisticated circle of wealthy and famous people. I don’t think Jordan really falls in love with Nick, she just need someone with whom she can be herself. Maybe she is a bit tired of being hypocrisy; wearing ‘mask’ all the time is a tiring job, isn’t it?

Moreover, Jordan is selfish and indifferent. We can see this when she is driving with Nick—who criticizes her of being a danger for others with her careless style of driving. But she merely says that it’s not her business, and it seems never occur to her that her driving should relevant to others than herself. I guess that’s why Jordan—despite of being a bit uneasy with Myrtle accident—keep continuing her normal life after that. Maybe the need to emerge to a glamorous life makes Jordan abandoning her own conscience. And I think Nick is right by breaking her up, she shares the amoral qualities of Daisy and Tom.

Posted by Fanda Classiclit at 7:00 AM
Email ThisBlogThis!Share to TwitterShare to FacebookShare to Pinterest
Labels: blog hop, The Great Gatsby