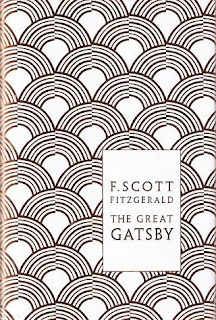 If there are books I would love to read over and over again, The Great Gatsby must be one of them. This was my second read and I gained much more than my first one, and I have a feeling I would still find more in the future reads. Reading The Great Gatsby is really like peeling an onion, you must peel layer by layer to get what is inside. This book is full of metaphors, and Fitzgerald does not always reveal everything straight forward; he likes to speak his ideas in broken sentences, challenging the readers to catch the hidden meanings. And that is why this book provides never-ending debates and discussions, which make me love it more.

As I have done many chapter posts and tasks for WEM, I won’t waste time by writing what Gatsby is about. In short, it’s about Gatsby’s false dream—how a poor man fights persistently to win his dream lover, becomes wealthy by disrespectable businesses and ready to snatch the woman from his husband; but after an accident that has killed a woman, he finds that she is only an empty idea, and that lavish prosperity in the end only leaves traces of moral corruption [taken from my first level inquiry post].

I have also peeled many aspect of the story in my three levels inquiries, that I have almost nothing left now to make a decent review (LOL). But instead, I have challenged myself earlier to ask one important question, which I also invited others with whom I read this along to answer.

Do you think Gatsby is really ‘Great’? If yes, why? If no, why did Fitzgerald put it in the title?

First I must think about the criteria of ‘Great’; what do people usually mean when they say that someone is great? Success would be the answer. Great people are they who succeed in their fields. Now let’s apply this to Gatsby—does he succeed? A big no; he worked hard to reach his dream, not knowing that it has vanished. It’s not only failure; I can say he’s pathetic. So Gatsby must be far away from being great—although in a way, I admire his discipline, focus, and persistency to reach his dream. If we want to label him as ‘Great’, he is certainly great in accomplishing a personal target. Nonetheless, he is failed in the end; and one’s greatness is always defined by the result, right? Yeah, we are result-based generation. I can talk about this forever, but for now, let’s get to the second part of the question.

If Gatsby is not great, why is the book given The Great Gatsby as its title? What did Fitzgerald want to say to us? It came to me that maybe Fitzgerald wanted to emphasize that our way of defining greatness has been wrong. Maybe one’s greatness should not be valued only from the visible quality of success; it is merely the outer aspect of men; our old concept of success. I think Fitzgerald wanted us to look deeper into the inside of humanity. From the beginning Nick has been writing about morality: “A sense of the fundamental decencies is parceled out unequally at birth.” –(Chapter 1); so it makes sense that that is what Fitzgerald wanted to say to us through The Great Gatsby: morality. Morality is far more important than physical achievement.

American first dream was about discovery, individualism, and the pursuit of happiness [from Sparknotes]. However, the rise of stock market post-war had created a sudden euphoria, where people started to spend and consume at unprecedented levels. With that, unfortunately, morality started also to decay and corrupted. In Jay Gatsby, Fitzgerald wanted to show two different things.

First, the empty pursuit of dream; in Gatsby, American people should see that their first original dream had been vanished, and replaced by the moral corruption (Daisy is no longer the fresh-innocent girl Gatsby used to know, she had been…you know what). Second, the good morality; although Gatsby gained his wealth in disrespectable ways, he still have pure conscience in him (he stood up to take the blame of Myrtle Wilson’s murder although he did not do it). Between the two, while the empty pursuit of dream won’t make one great, I believe the good morality will.

At the end I think, Fitzgerald wanted to say that it is great of Gatsby to do what he did at the end of the story. It is also what has made Nick complimenting him: “They’re a rotten crowd; you’re worth the whole damn bunch put together”.

But most of all, I think, The Great Gatsby itself is a great literary work by Fitzgerald; maybe not the greatest one, but obviously one of the greatest… ;)

Five whole stars for The Great Gatsby, a novel I will certainly read and read again in the future.