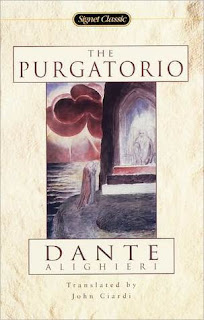 I was struggling through this second part of The Divine Comedy: Purgatorio. Unlike Inferno—with a vivid description of Hell and some recognized figures—Purgatorio is more like an abstract image of divine actions. It is full of allegories representing many acts and symbols from Bible, that the poem is often boring and tedious.

After leaving Hell/Inferno, Dante, still with his guide Virgil, enters the Purgatorio. The setting of Purgatorio is of course different with Inferno. Dante imagined purgatory as a mountain that has many levels. At the bottom is Ante-Purgatory, then seven terraces where souls are being punished and purged. The more the mount ascend, Dante gets more spiritual growth. The mountain top is the Earthly Paradise, and after this one, Dante is purified from his sins and deserves to enter the Paradise (the third part).

We already know from Inferno that it was Beatrice who initiated this journey for Dante, and she even chose Virgil—the Roman poet—to be his guide. Now in Purgatorio, Beatrice shows herself in the middle of the journey, and even guides Dante at certain point after Virgil leaves them, near their end of journey. Another poet called Statius also accompanies Dante.

The poem itself is of course still beautiful; and this is the only aspect that kept me reading. So, if you just want to read a poem, this might be your choice. But, if you want to get what Dante talks about, you can hardly depend on the poem only. Fortunately, thanks to the digital era, there are many reading guides for these kinds of complex classics works. I was lucky to have found this site from which I learned a lot of things I would never thought about before. I think Purgatorio is more like a theological study about the Church than a poem; no wonder several people stuck on it although they can get through Inferno. Shortly, Purgatorio is a great work of poem, but needs a huge determination to finish it.

To get a better idea of the contents, you can read my summaries: Ante-Purgatory – Terrace1~2 – Terrace 3~5 – Terrace 6~7 – The Earthly Paradise.

Three stars for Purgatorio, and now I really hope Paradiso would be much better than this…