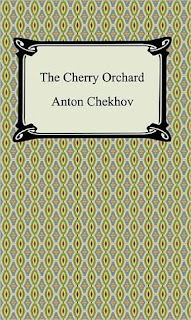 For Let’s Read Plays – other author theme of July, I have picked Anton Chekhov. Chekhov is actually more famous with his short stories; he is actually the father of short story writing in Europe. I have once read one of his short stories, and have caught his clear, sharp, and deep method of writing. And I thought it would be interesting to see whether his play was written in the same style. I picked The Cherry Orchard, in particular, as it is listed on my WEM self project. I have worked on the Act summaries, as well as the stage inquiries: the first and the second level.

The Cherry Orchard tells the story within the Ranevskys’ household. The famous cherry orchard itself located within the Ranevskys estate; and said to be one of the most beautiful places on earth. It might be exaggerated—as a cherry orchard should looks just as other cherry orchards—but it certainly kept the secrets and history of the family for many generations, which creates a special bound between the orchard and the residents; the cherry orchard looks beautiful because it bears many memorable events of the past. And now the Ravenskys must let their estate go, as it would be sold in an auction to pay their debts.

This play’s main conflicts lay on the cherry orchard’s sale, as each of the characters’ future would be depended on the sale. There are people who detest the idea; Lubov Andreyevna—the present owner—a widowed mother, who has been abroad for five years before finally returns to Russia. Lubov cannot think of leaving, as she would be like being cut off from her history by that. On the other hand, Lopakhin—a businessman, son of the estate’s old slave but later on was raised by the family—insists that the cherry orchard must be cut down, so that a villa can be built on it. Trofimov—a family teacher—is pleased with the idea of moving from the estate, and is excited to welcome the future together with Anya, Lubov’s daughter. While for Varya—Lubov’s adopted daughter—it would be a total ruin, as she would loose her job besides her home.

To read this play as only portraying what it performs, would be very deceiving. At first, you would think that the whole play is only the fuss around losing a family estate and moving away. But if you read between the lines, you would find Chekhov’s idea or critics on how Russians see the upcoming waves of change. At the time Chekhov wrote this, modernism was entering Russia, and the old values are struggling to survive (this play was first performed on 1904). Each character here stands for certain idea which reflects the contrast between people who are with modernism versus people who keep holding on the Old Russian values.

In the play, you’d see many incoherent dialogs or scenes within the Acts which makes the plot seems won’t go anywhere. Actually the first four Acts feels flat and overstretched, you would be asking yourself, what does Chekhov wanted to say, really? Just keep reading, because in Act Five Chekhov would change the gear, and the acceleration is suddenly increasing towards a climax. And lo! The ending would be very surprising, if not shocking. After the curtain has been down, you would sit still, struck, and couldn’t believe that the play has ended, and that ‘that’ would be the end! And then, you would reflect the whole play, of the pieces of incoherent dialogs and scenes, and suddenly, every piece would makes sense, as if the play is a huge puzzle game. By reflecting it, you would also see what Chekhov has wanted to tell you beneath the flat story. And finally, you would see the genius brain of the author who could present his ideas in this play!

Four and a half stars for The Cherry Orchard, as although I sometimes feel uncomfortable with the sudden changes in scenes or immediate incoherent interruption, the language is beautiful, and I love Chekhov’s detailed description of the background settings.

Posted by Fanda Classiclit at 4:38 PM