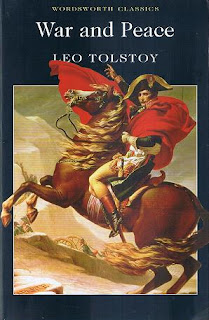 “History is the life of nations and of humanity.”

Leo Tolstoy dedicated War and Peace—a historical fiction which he insisted for not being a novel—to convey his ideas about history and war, which is different with what historians at that time believed. Tolstoy crafted his ideas through the lives of five aristocratic families during the French invasion of Russia by Napoleon on the early 19th century. He took us to witness how humanity was built in battle field as well as in soirees and parties Moscow and Petersburg.

The story begins in 1805 when Russia—under the reign of Tsar Alexander I—is expecting war with French.  Then I began to know the proud and resolute Prince Andrew (Andrei) Bolkonski, and his timid and religious sister Princess Mary Bolkonskaya; the temperamental and impetuous Count Nicholas (Nikolai) Rostov, and his impulsive, restless sister, the young countess Natalya (Natasha) Rostova. There are also the very rich, absent-minded Count Pierre (Peter) Bezukhov, and the poor but ambitious Boris Drubetskoy. Throughout the book, their fates (together with so many other characters’) would be entangled one another during the turbulence era of the war. While the war is progressing—Tolstoy portrayed it very vividly as if he is reporting the battle live from the battle field—so are the characters, developing along with their sorrows and happiness, love and hatred.

My most favorite character from the beginning is Prince Andrew. He’s a man who knows what he is doing, and he’s always self-confident. *spoiler alert* Naturally, when he is falling in love with Natasha, I began to hope that the relationship would end up in a happy marriage. Well, I don’t quite like the impulsive Natasha, who always thinks about herself, but I just want Andrew to be happy. So, you can imagine how angry I was with Natasha when she decided to elope with Anatole. Seriously, how could she ever think about it at all?? OK, I understand how she must have felt, in her youth, to be separated with her fiancée for one year, to be left idle in the confinement of home, war, and the engagement bond, without anything to busy her restless mind. And she was still naïve when the sexy Anatole used his irresistible charm to her. By the way, Helene and Anatole are just the same: brainless, immoral, but charming. And people often shamefully take only the charm side, but fail to see deeper than that. And they absurdly think Helene is very clever when she is actually very stupid. Oh, people!

Sorry, back to Natasha... :) I understand how she could be attracted to Anatole. But deciding to elope with him, while she knows that it is disgraceful (or, does she really realize it?), how could she agree with the idea?  I can never understand. Tempting to do one thing is normal, but deciding it after consideration? And like Princess Mary, I was a bit hurt knowing that Natasha could fall in love with Pierre just a few weeks after Andrew’s death. Did she really love Andrew, then? Not as deep as how Andrew loved her, I think… *spoiler end*

Still about Andrew, I like it most when he is philosophizing with Pierre—who becomes his best friend. Their debates are always deep in meaning, and from them I learned a lot about life and war. I believe Andrew represents Tolstoy’s own way of seeing life and war (especially war). In one of his deep conversations with Pierre Tolstoy points out that what really moves a war into its nature is not the genius strategies or the great commanders, but the army who really involve in the battle. In it, Tolstoy wants to say that war is actually a movement of humanity (until now I still don’t know what the ‘peace’ in War and Peace stands for, do you?).

There is a gap between people who (think they) control the battle course, and people who fight in the battle. The minority of generals, commanders, etc. give commands but do not involve in the battle; while the majority of the army, who must execute the commands, really fight the battle. When historians write about a particular battle, they would only read the written plans, strategies, reports from the generals and commanders, and from them draw a conclusion that this general or that commander is genius because he can create such tactics. However, in reality, the commands are rarely be executed by the army in the battle field. Just imagine, when you are in a battle, between life and death, would you really think about your boss or even your nation? Of course not, you would first think of your own life, of surviving. It’s natural, because human’s instinct is to survive.

In the chaos of a battle, generals and commanders act and give instructions based on reports, while the army act based on their instinct. When one report being delivered to the commander, it would be considered, discussed, decided, replied, then sent back to the army. But meanwhile, the course of the battle might have changed completely, and so the instruction is not up to date anymore. In short, it is very difficult to pick one hero (or culprit) of a success or a failure in war, because there are so many circumstances that intervene the course of a war. In the end, we must realize that war is moved my humanity, not by a genius mind.

The same could be applied to any other histories. There are no coincident or magnanimity in wars or other events, but only circumstances and humanity. That’s what Tolstoy had wanted to speak through this book. Unfortunately, he took pains to explain it in the second epilogue of twelve chapters! That makes the ending feels so anti-climax, whereas he actually had slipped this philosophy of war and history throughout the story. It goes well because, while he is explaining his opinion, the readers are provided with the example in the story. So, without any further essay, we have understood what he conveys very well. Closing it on the first epilogue would be much better than stretching the epilogue twelve more chapters full of repeating frowning-explanations!

For all that, I attached four and a half stars for War and Peace. I love Tolstoy writing and usage of so beautiful metaphors, but I’m disappointed in the closing. For me closing passage or lines are what echoes from the book long after I finish it. While I might have forgotten the opening, the closing is what I bring back with me to reality.

Posted by Fanda Classiclit at 1:56 PM