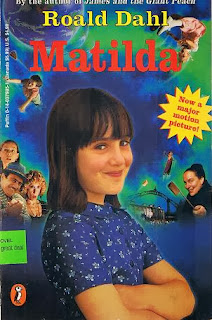 I’ve been curious for some time with Roald Dahl. Many of my friends like his books, and some recommended me to at least give him a try. I’m not a big fan of children books, although time to time I still read several, but I think I should really try one of Dahl’s children fictions. I found this copy of Matilda last year in a second hand book kiosk, and so I have been delving for a week into children’s world… :)

Matilda is a little girl with brilliant mind. Born from parents who are ignorance to their kids does not hinder little Matilda to educate herself. From age 3, she has already read newspaper; and because her father refused to provide her books, she goes to public library and sits there every afternoon to read books. At age 4! And not just children books—which she consumed in just a few moments—she reads adult classics like Great Expectations, Pride and Prejudice, The Sound and the Fury, Grapes of Wrath, and many others. At age 4!

However, far from being treated with special care, Matilda meets challenges both at home and in school. At home, there are her parents; while in school there is the wicked Headmistress who (also) despises kids. Being bullied and distrusted by these three adults forces Matilda to use her brilliant brain to create a coup d’état.

My immediate response while reading this is ‘impossible’ and ‘exaggerating’. But then, Matilda is a children book, and to read this kind of book one needs to borrow children’s mind which is full of imagination. However, still as a child I don’t think I would have liked Matilda. She’s the kind of naughty girls whom I don’t like even when I was a kid.

One thing that annoyed me most is how Matilda abused her father because she doesn’t approve of his cheating way of doing business. Dahl has made parent abuse looks like heroic act! I’m just wondering, is this book really meant for children reading? I would ban this book if I were at an elementary school council! Mr. Dahl, it’s shame on you for teaching children to do that to her parents, not for self-protection, but just to punish! Where does the ‘honor thy father and mother’ commandment go?

Over all, I don’t feel sympathy with Matilda. Yes, she was often misunderstood by the elders, and it’s shame on them!, but still, it doesn’t give her right to use her intelligence to do mischievous things. The book is quite funny sometimes, and actually the story flows nicely. Dahl is good in telling the story, but beyond that, it’s just annoying and harsh.

Three stars for Matilda, and I don’t think I would ever read anything from him again. Apart from the light reading which I sometimes need, It’s such a waste…