Ishmael highlights the prestige in whaling business despite of people’s underestimation. Whalemen even supply sperm oil for Kings and Queens’ coronation. Its spermaceti—wax obtained from the head of sperm whale—is also used as ointment and medicament. And that’s what makes sperm whale business is more prestige than other whales’. 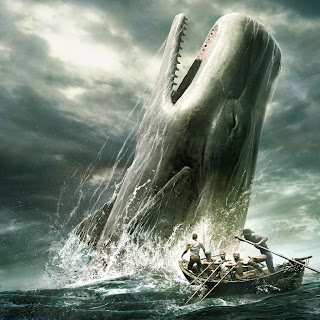 Here is the ‘rank chart’ of the whaling cruise on board of Pequod (from what I gathered so far): 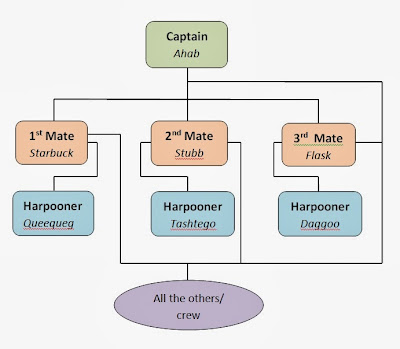 Starbuck is the chief mate, seems to be a careful sailor, very brave—from brutal experiences—also the most experienced and educated person. Stubb the second mate is an easy-going, indifferent, and humorous person who is never seen without his pipe. While Flask the third mate is an ignorant but fearless person. Each of them picks a harpooner as his ‘squire’ when they are at work. And finally…the enigmatic Captain Ahab makes his first appearance on deck. He is a determinate man with erect figure and strong charisma. Stubb is the first who gets the ‘blow’ when Ahab is angry.

According to Ishmael, the harpooners should have ranked equally with the captain, however here in particular, Ahab has something ‘grandeur’ in him that makes him much distinguished. Moreover, in dining time, harpooners have their turns after the mates, so informally they are a lower partner of the mates.

Ahab finally makes everyone understand that his real intention for the cruise is to take his personal revenge on Moby Dick, the famous White Whale, which has taken one of his legs. In fact it’s not just a bitter rage; in Ahab, the attack has given him a madness and monomaniac hatred. And so big is his hatred that he will do anything to hunt Moby Dick; he technically calculates and maps everything to locate it.

Starbuck doesn’t agree because Ahab has turned the whaling business into a violent revenge, but Ahab is too strong in character, that Starbuck has no choice but to obey. Nevertheless, Starbuck still has his conscience and a little hope to fight the darkness that begins to infiltrate the ship. In fact, each with his reaction, everyone on board feels the evil air surrounds them. Knowing how vulnerable his ambition among his men is, Ahab pretends to still have interest in the voyage’s original business, while at the same time keeps pursuing Moby Dick.

Moby Dick, the White Whale, has become a legend among the whalemen. It is clever and has caused several accidents in the sea. Moby Dick is distinguished and recognizable because of its unique shape: the peculiar snow-white wrinkled forehead, the pyramidical white hump, and the shrouded blue streaks and spots which makes it looks whitish. The color white has much psychological value in different societies, but in Moby Dick, it has this divine, noble, and pureness aspect.

One of the crew hear human noises under the hatches. His friend hushes him at that time, but then, when the first sign of whales comes one night, the crews are surprised by the appearance of five Oriental men who turn out to be Ahab’s crew, smuggled into the board unknowingly by the bosses. And so, there is the first commotion in the ship when one of Ahab’s men finally sees the sign of whales.

My favorite in this stint is Starbuck’s monologue in chapter 38. It reflects the uneasiness when we know that there is an evil intention within our group. It’s like the dark cloud that disturbs your pure soul. In the helplessness of facing the ‘devil’, he can only cries: “Oh, life! ‘tis now that I do feel the latent horror in thee! But ‘tis not me! That horror’s out of me! And with the soft feeling of the human in me, yet will I try to fight ye, ye grim, phantom features! Stand by me, hold me, bind me, O ye blessed influences!”  Here I really felt like reading a play!

About Moby Dick, it is always our world’s typical, that the unknown or the not-yet-visible would create such a mystic. It is the case also with Moby Dick: “Though in many of its aspects this visible world seems formed in love, the invisible spheres were formed in fright.”

And this got to be the most perfect quote to portray Ahab:

“God help thee, old man, thy thoughts have created a creature in thee; and he whose intense thinking thus makes him a Prometheus; a vulture feeds upon that heart forever; that vulture the very creature he creates.” 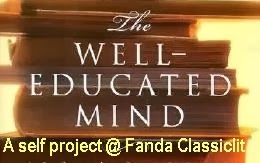