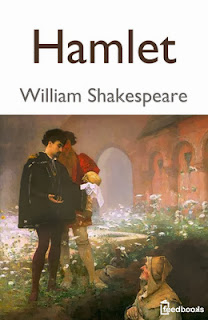 After reading Hamlet, I can officially announce that tragedy is my most favorite theme when it comes to plays. The story is more intense and there is less nonsense than in comedy. Although I tend to like historical tragedy (Julius Caesar, Antony & Cleopatra, Saint Joan and Richard III are my favorites), Hamlet is good, and I quite like it.

Hamlet is the Prince of Denmark. His father—Hamlet senior, the King—has just passed away, and now Denmark is ruled by Claudius, King Hamlet’s brother. Not only the kingdom, Claudius also took over the Queen—Gertrude—to be his wife. In his mourning, Hamlet was told by his friend Horatio that a Ghost that looked like the late King Hamlet has appeared lately. One night Hamlet saw, or rather met, the ghost of his father, who said that he has, in fact, been poisoned by Claudius while he was asleep, and he wanted Hamlet to take revenge for him.

Still unconvinced by the ghost, Hamlet arranged with a group of actors to perform a certain tragedy based on a story he wrote himself, the story of his father’s death (according to the ghost). Hamlet wanted to seek proof of Claudius guilt, and to justify his revenge plan. Claudius was angry and plannd to kill Hamlet, while Hamlet killed Polonius accidentally as he thought he was Claudius. Polonius’ son Laertes wanted to kill Hamlet to take revenge of his father’s death, and he was used by Claudius to kill Hamlet in an arranged duel, involving poisoned sword and poisoned goblet of wine. As in every tragedy, everybody died, leaving Horatio to tell the world the whole truth.

I like Hamlet for his smart tongue, it seems that he always wins from anyone who wants to pull something off him that he doesn’t freely give. His counter to Guildenstern’s unceasing pressing questions is one example. Hamlet insisted that Guildenstern should try playing a flute despite of the latter’s confession that he doesn’t know about melody. Hamlet then uses the flute playing to satirize his impending questions: “Call me what instrument you will, though you can fret me, yet you cannot play upon me.” Clever!

And when he wasn’t roused by the passion for revenge, he could be quite romantic too I guess…

“Doubt thou the stars are fire,
Doubt that the sun doth move,
Doubt truth to be a liar,
But never doubt I love.”

I wonder, did he actually love Ophelia? And if Claudius have not killed his father, would he marry her? Just playing “if”…. :P

His speech, when he and Horatio met a gravedigger, is quite interesting too; he talked about how men would all end in the same shape: skulls in the grave. It makes me reflect of how vain everything we think is important in this world, as it would be vanished when we are dead.

One rather contradictory thing: Hamlet did not kill Claudius when he caught the King praying. Is it a noble act? If refusing to attack someone unprepared is the reason, then I can see Hamlet as a gentleman. However, Shakespeare purposely wrote that Hamlet thought that killing a man while he was praying would hinder the victim from ascending to Heaven. Is this some moral conscience? But he was having revenge, which is against conscience. And he killed Polonius nevertheless (thinking he was Claudius) when he was hiding behind the tapestry, definitely unprepared. So why did the praying aspect make the difference?

Overall, Hamlet could be one of my favorite characters, if only he hadn’t taken Polonius’ accidental death rather lightly. I know that he didn’t mean that, and he must focus on his own mission, but I still think he didn’t care much that he has wrongly killed an innocent man. Well….is it possible that Hamlet, in his effort to be appeared crazy, has let his mind be poisoned with the revenge plot, as to become slightly unbalanced? Maybe….

Four stars for Hamlet, and this would be my last play I read for Let’s Read Play!