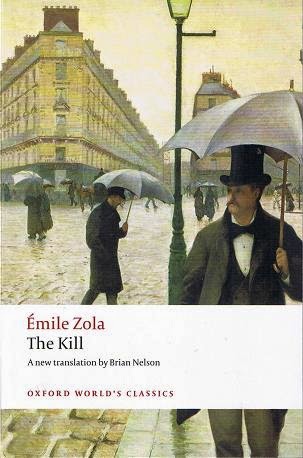 If you think I am going to review a thriller/mystery book, you are mistaken! The Kill is a novel by Émile Zola; the second in his Les Rougon-Macquart series, and there is no murder act in this novel, whose original title is La Curée. From the Introduction (I read Brian Nelson’s translation from Oxford World’s Classics): “la curée denotes, literally, the part of an animal fed to the hounds that have run it to ground.” From the title, we immediately recognize the first naturalism trace on this novel.

The Kill depicted the vulgar political spoils and financial gain during the Second Empire of France. Aristide Rougon arrived in Paris with the hunger of a huntsman. Thanks to his brother who was a minister in the Second Empire, Aristide got his first job as a clerk in city planning office, and changed his name to Aristide Saccard. From the beginning Saccard was a scoundrel; and with his cunning eyes he saw how Paris was transforming itself into a modern city by building new boulevards over the existing houses. He began his ambition with property speculation—buying houses that would soon be demolished, and later on claimed a high compensation to the city. His loyal wife suddenly died in the right time; as the only way to get huge capital money for his ambition was by marrying a rich girl.

Renée was a dynamic woman, and living glamorously in her mansion bored her very much. So, when Maxime, Saccard’s son from his late wife, moved in the house, the mother and the stepson soon began their (half) incestuous love affair. And these two moral corruptions grew eagerly in the Saccards’, and in the end Renée became the victim; she had lost the battle, just like a quarry finished by its hunter.

is novel appeared to not containing enough conflict to make it enjoyable. After the background story of Saccard and Renée, the plot becomes rather flat. Yes, like all other Zola’s novel, the character(s) would have their downfall, but in The Kill, the process is rather too tedious. Zola went describing the interior of buildings in long and detailed passages, that at the end you cannot imagine anything at all. The only comfort comes from the detailed description of Renée and Maxime’s excursion to Bois de Boulogne. As always, Zola’s painter-side could brush his words beautifully onto the pages, as if you are watching lines of paintings on Bois de Boulogne in a gallery. When comes to nature description, Zola is great.

In relation to the Rougon-Macquart series, The Kill pointed out the greediness in gold and women (lust for money and for pleasure); moral corruption which Zola found on the Second Empire of France.

Three and a half stars for La Curée, it’s not my favorite Zola, but the naturalism theme—and his writing style, as always—is still beautiful.