A Love Story by Émile Zola 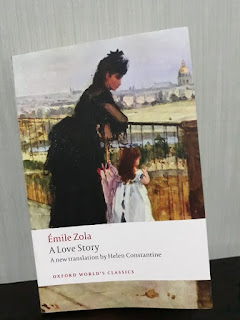 Une Page d'Amour is the eight novel in Rougon-Macquart series, if you follow Zola's recommended order of reading. Helen Constantine titled this new translation published by Oxford World's Classics with A Love Story, instead of 'an episode of love'—the closest translation to Zola's original title—because she found that this book is not only about love affairs, but also represents Zola's love for Paris.

Hélène Grandjean (nee Mouret) is the daughter of Ursule Mouret (nee Macquart)--the illegitimate daughter of Aunt Dide (the matriarch of the Rougons and the Macquarts – The Fortune of the the Rougons). After her husband's death, she lives tranquilly with her sickly 7 y.o. daughter Jeanne. Their neighbors are a young Doctor Henri Deberle and his wife Juliette. Henri attends Jeanne when she's having a seizure. She is believed to suffer the 'hereditary lesion' as was her grandmother (Aunt Dide). A sexual passion then starts slowly to grow between Hélène and Henri.

On the other hand, an Abbe Jouve and his respectable but boring brother Monsieur Rambaud are regular visitors to Hélène's home. The Abbe has at first advised Hélène to remarry with M. Rambaud to protect her honor, but a passionless marriage—just what she had had with her late husband—does not interest her. One day, Hélène learns that Juliette Deberle too—as is many other women—is having an affair with another man. That encourages her to finally give up her modesty, and gives herself to Henri. Is that all? Of course not! It's just the beginning of an impending doom.

As I said earlier, this novel is not all about love story or love affairs. Two things have intrigued me during my reading. The first is Jeanne. She seems to share her mother's growing sexual tension. She becomes more and more suspicious and jealous on Doctor Deberle, and even feels ashamed and humiliated when the doctor saw her naked breast. And she is tormented during her mother's love making with Henri. She seems to know what is going on with the two lovers, and her anxiety grows parallel with the growing intensity of her mother’s passion.

Then, there was also the parallel between Hélène’s emotional condition and her views of Paris. Hélène lives in a suburb called Passy. From her bedroom window, she has a complete view of Paris. She and Jeanne love to stand by the window to look at and adore the city. There are a lot of passages where Zola described (or literally painted) the panoramic view of Paris. At first I thought it’s his passion for Paris that drove Zola to capture it in different conditions (sunshine, raining, starry, or blazing). But along the chapters, I began to realize that the current condition of Paris correlated with the current level of Hélène’s emotion. When her sexual desire began to kindle, Paris began also to ablaze with lights. That was just remarkable! I found an interesting piece from the Introduction (by Brian Nelson) about this: “[following Freud] …that a dream-landscape is most often a representation of the sexual organs. The female sexual connotations of the landscape are plain:  the focal centre of the city is the Seine, with Paris seen as an immense valley. The violence of the storm as it sweeps across the city matches the phallic significance of the Panthéon, in which Jeanne momentarily imagines her mother to be…”

So… what is this novel really about? That’s my direct question after finishing it. I can only guess that it is a kind of psychological study on love and sexuality—how it grows, and many variations of it (I think Rosalie-Zéphyrin’s relationship serves as the opposite of Helen-Henri’s—the healthy v passionate relationship?) Or, is it a critic against the hypocritical bourgeoisie, who ‘condone’ a married woman of having love affair, but ‘condemn’ a widow of having done the same? Either way, this has been an interesting reading. Not my favorite, perhaps, but it’s still beautiful, as always…

Posted by Fanda Classiclit at 3:16 PM