The Ides of March by Thornton Wilder 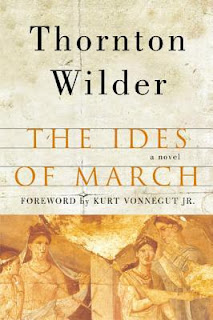 Julius Caesar is perhaps one of the most famous people, of whom so many authors have written about. And after that many (Shakespeare included), what else left for Thornton Wilder to cover in his The Ides of March? To me, that was the most interesting aspect which persuaded me to read this book at the first place. Partly because I thought it was a play (Wilder is famous for his plays), and partly because Ancient Rome always fascinates me, particularly the era of Caesar and Cicero. I am Cicero's admirer too, if you haven't known it. :)

Anyway, with that in mind, I plunged into the book, only to find, not without surprise, that The Ides of March is actually an epistolary novel! It contains communication through letters of Caesar and people around him, his journal-letters to a fictional character of Lucius Mamilius Turrinus, as well as Commonplace Books of some historians such as Cornelius Nepos. Commonplace Book is an account of events of the writer's time that he kept by himself. These materials are, of course, fictional, but Wilder kept most of the events and the characters as real as possible; but not the times.

In the Preface, the author has stated that 'historical reconstruction is not among the primary aims of this work.' What, then, is this work's about? I had to finish it before realizing the answer. The Ides of March covers events in year 45 BC, from the profanation of the Mysteries of the Bona Dea by Clodia Pulcher and her brother Clodius, to Caesar's murder. I have assumed from the novel title, that Brutus, Cassius, Casca, and the gang would be the center characters. But no--another surprise!--Clodia Pulcher played almost as much important role as Caesar in the plot. Then, Cleopatra also made her appearance, as well as Catullus the poets who fell in love with Clodia. At first I asked myself: 'Why must I read about Clodia Pulcher and Catullus? They had nothing to with Caesar's murder!'

After finishing the novel, I realized that The Ides of March is more a philosophical novel than historical; that Wilder might have brought us to enter Caesar's mind; saw him as a statesman--as well as a man--and enter one of the genius minds that ever lived on earth. This side of Caesar appeared in his journal-letters to Lucius Mamilius Turrinus. Most of them reflect his searching for human existence, and his thoughts on many subjects. These insights changed my mind on Caesar. Now I can see that Caesar is an extremely proud person. He is not snobbish, but he just believes that he is different from others. He knows how to make Rome a solid state, and has capability and commitment to do the works, when others had none of the qualities (and he was probably right). He cares about others, especially common people--although perhaps selfishly--that they also loves him in return. He seems to dislike vulgar luxury and indulgence, and hates the deity that others imposed on him. His bigger flaw, perhaps, is women. But even in his affair with Cleopatra, I can see that being a genius man, Caesar longs to acquaint others who equal him. Cleopatra is one! They understand each other. Although Caesar also realizes that Cleopatra's only concern is her Egypt. What a lonely man, Caesar is!

I was most intrigued by Caesar's decision to let Clodius sneaking into the Bona Dea ritual disguised as a woman to meet Pompeia, albeit a warning from Cleopatra before the event (both Caesar and Cleopatra have secret polices). Is it his way to 'punish' Pompeia because she was aware of Clodius' plan but did nothing to prevent it (and thus dishonored herself)?

About the conspirators, Caesar was aware of their presence (from the secret police), but he must have never thought them to be so solid, and certainly never suspected Brutus, whom he loved. I think Brutus is the most hypocrite man I've ever known. How he scolded his mother for suggesting the idea of tyrannicide (I have never known this word ever existed!); he really appeared to be disgusted; but then… :(. Even Dante made him dwell on the lowest circle, didn't he? And what was that for? The freedom, they said? It’s more for their persona; freedom, I think, not so much for Rome!

All in all, it is an interesting take on Julius Caesar. 3,5/5 was my final score.

Posted by Fanda Classiclit at 9:30 AM