I have been “warned” in the Translator’s Note by Helen Constantine (translator of A Love Story – Oxford World’s Classics edition) that ‘[Zola’s] abiding passion for Paris shines throughout its pages.’ Nonetheless, I was not prepared to find copious “portraits” of Paris flooded the novel. Paris at twilight, Paris at night, Paris after raining, Paris in the morning; seems that Zola has captured his beloved Paris at every condition. At times, Zola could write a whole page and more, just to tell us about how Paris looks at night! Here I share some for you…


Paris was brightening in the burst of sunshine. After the first ray of light had fallen on Notre-Dame, other rays followed and struck the city. As it went down, the sun caused breaks in the clouds. Then the quartiers spread out in variegations of shade and light. At one minute all the Left Bank was a leaden grey, while the circles of light streaked along the Right Bank, unrolling next to the river like the pelt of some gigantic beast. [...] A ray of light, whose shafts sprang out like rain from the fissure in the cloud, fell into the empty chasm that it left. You could see its golden dust trickle like fine sand, grow into a vast cone, and pour down in torrents on the Champs-Élysées, dancing and splashing with light. This sparkling shower lasted a long time, like the constant firing of a rocket. 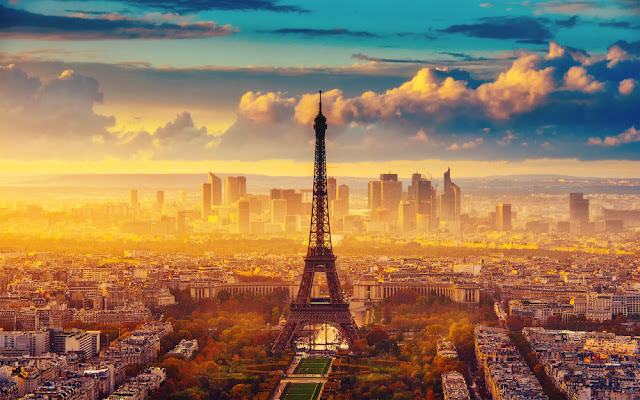 Beyond the irregular towers of Saint-Sulpice, the Panthéon stood out on the skyline with a subdued glow like a royal palace of fire about to be burnt to cinders. Then the whole Paris was lit up at the pyers of monuments as the sun went down. Flickers of light gleamed on the tops of roofs […]. All the façades which faced towards the Trocadéro were reddening, their glass sending out showers of sparks, which rose from the city as though some bellows were ceaselessly firing up that colossal forge. Fountains of light, constantly renewing themselves […]. Even on the far plain, from beyond the rusty embers that buried the ruined faubourgs, which were still hot, the odd rocket, shooting up from some suddenly reignited fire, blazed. 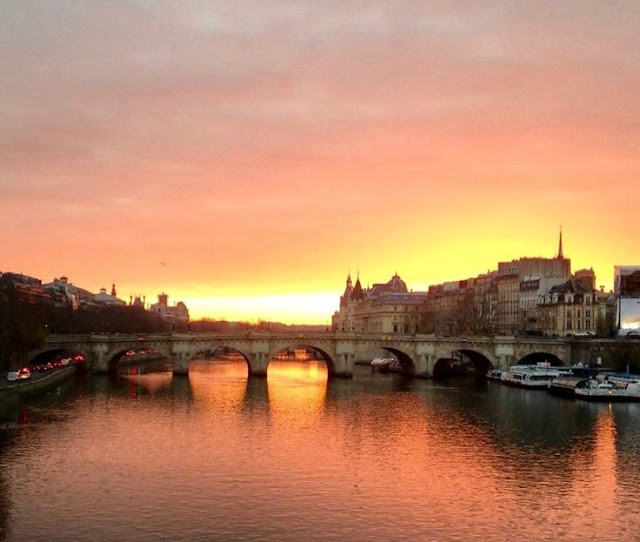 Night was falling. From the pale sky where the first stars were shining, a fine ash seemed to be raining down on the city, that slowly but surely was disappearing. Shadows were already massing in the dips while an ink-black line rose from below the horizon, devouring the remains of the day, the hesitant glow that was retreating towards the setting sun. Beneath Passy there remained only a few stretches of roof still visible. Then came the black flood as darkness fell. [...] They were silent, their eyes still raised, dazzled and trembling a little beneath this, as it seemed, ever vaster teeming in the heavens. Beyond the thousands of stars, thousands more appeared, more and more, in the infinite depths of the firmament. It was a continual flowering, an ember fanned into life, of worlds that burned with the quite brightness of jewels. The Milky Way was already whiter, spreading its starry atoms so innumerable and distant that they were no more than a scarf of light in the round firmament. 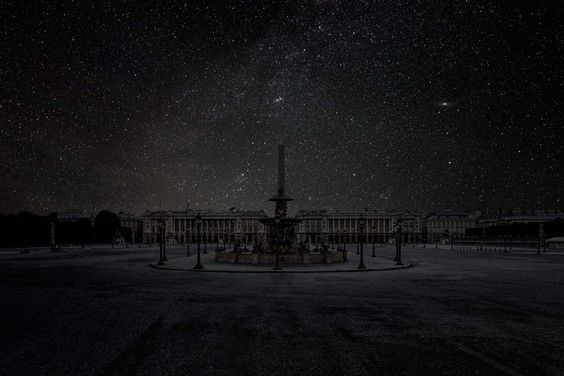 To the left, another gap appeared, the Champs-Élysées led a regular procession of stars from the Arc de Triomphe to the Place de la Concorde, where there was a glittering constellation; the the Tuileries, the ouvre, the blocks of houses next to the river, the Hôtel de Ville right at the back formed a dark shape, separated here and there by a large brightly-lit square. [...] On the other bank, on the right, only the Esplanade was clearly visible with its rectangle of flames like some Orion of the winter nights who had lost his belt. The long streets in the Quartier Saint-Germain were lit rather despondently at intervals. Beyond them, the populous quartiers scintillated, lit up with the little flames packed closely together, glowing in a misty nebula. 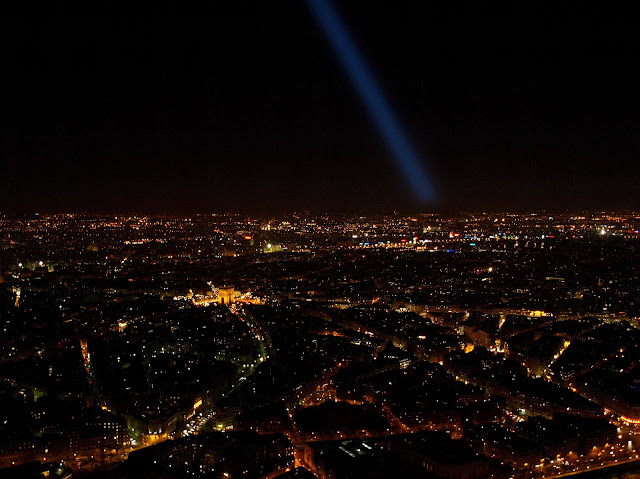 On the Pont des Invalides stars constantly crossed, while below, along a black, thicker band, was a miraculous thing, a group of comets, whose golden tails stretched out into a rain of sparks. These were the reflections of the lamps on the bridge in the waters of the Seine. But beyond that, began the unknown. The long curve of the river was etched out in a double string of gaslights attached to other strings of lights, from place to place, square to square. You would have thought that a ladder of light had been thrown across Paris, resting at two ends on the edge of the sky, in the stars. 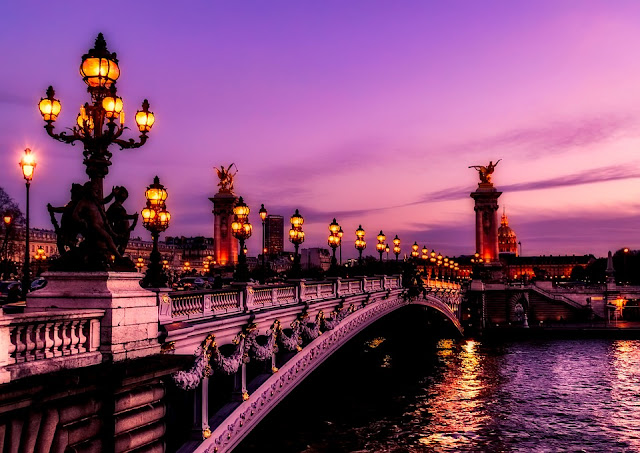 All you could see in the far distance was a bank of clouds which were heaping up a landslip of chalky boulders. Now in the pure, intense blue sky, puffs of cotton wool were sailing by at a leisurely pace, like flotillas of little boats billowing out in the wind. To the north, over Montmartre, a web of exquisite pale silk stretched over a section of the sky, like a fishing net on a calm sea. But as the sun went down over the hills of Meudon, the last of the downpour must still have been obscuring the sun, for Paris, under the brightness, was still dark and damp, beneath the steam of the drying roofs. The Seine had the dull sheen of an old silver ingot. [paris-rain] 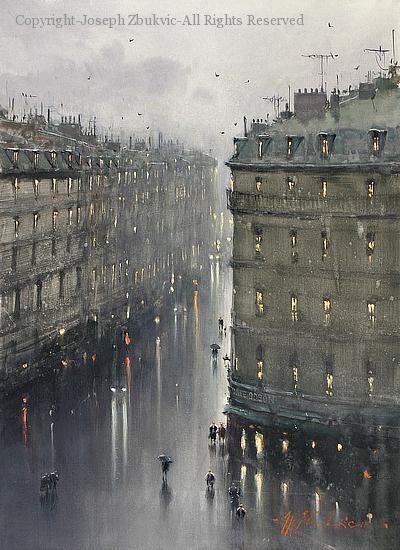 I could have shared more, but I have to stop now before hurting my arm from continual typing!
Posted by Fanda Classiclit at 1:26 PM

Email ThisBlogThis!Share to TwitterShare to FacebookShare to Pinterest
Labels: A Love Story