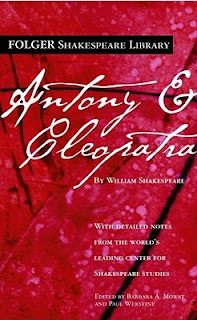 This is my second Shakespearean tragedy after Julius Caesar, and while we are still entertained with wars—though not as flourish as Julius Caesar’s—we are also spoiled with stories of love and lust, loyalty and betrayal, nobleness and dirty politics; all bitters-and-sweets in human’s live.

I believe Antony was a great general, he fight with his soldiers; not just watched and gave orders from the camp (compare this with Octavius who pointed Agrippa to lead the army), and for that his soldiers loved and respected him—well at least before he was crazy. He was a gentleman of his time, always treated his soldiers fairly, and his friends loyally. However—as every man must have his weakness—Antony could not resist love charm; and in this case, the charm has a name: Cleopatra, the queen of Egypt.

From the beginning of the play we can see that Cleopatra was an obsessive woman, she kept asking Antony how much he loved her. If one does not know her reputation, one might think she was just like any other silly young girl who was in love. But I believe this was not the case of Cleopatra. I think she was an ambitious, self-possessed and even cunning woman—you could not become a queen at that time if you did not possess those qualifications—and for her, to keep her throne was more important than to win a man’s heart. I think, after Caesar’s death, Cleopatra needed an allegiance to protect her interests, and she had chosen Antony.

On the contrary, Mark Antony had really fallen in love and trapped into Cleopatra’s charm, that he neglected his duty as the ruler of one third of the world, leaving the young ambitious Octavius worked alone (with Lepidus) in Rome for his own interests. This was Antony’s biggest fault, to let his heart controlled his brain. However, with a woman so charming and determined like Cleopatra, it’s difficult for Antony to avoid his faith.

I loved this play a lot, it has all you can ask for an exciting reading; history, romances, politics, wars and witty dialogues now and then. I always love Roman history, so I don’t have any trouble of loving this one too, plus I think I’m a new fan of Mark Antony, although Cicero is still (for me) the best. One thing I don’t like from this play, is how Cleopatra was portrayed here by Shakespeare. I think, except for once or twice when she was really angry and in the last chapters, one will think Cleopatra was a spoiled teenager who was madly in love.

I am still wondering whether Cleopatra had betrayed Antony as Antony had accused her. If not, why had the Egyptian deserted their master twice, first in Actium battle, second near Alexandria? And Cleopatra never gave Antony any reason why she had instructed her army to abandon him in Actium, nor did she defend herself when Antony accused her after the last battle; she just left him and hid in the monument.

Assuming that Cleopatra was innocent and she hid herself merely afraid of Antony’s rage, why did she send her eunuch to tell Antony that she had died, but then sent another messenger to say that she was still actually alive? Did she send the first one because she knew how Antony would react if he heard about her death—thus keeping her promise to Caesar; then sent the second one because she was in fact still in love to him? Oh what a complicated woman!

The label of “hero of this play” I think must be granted to Eros, who—when was instructed by Antony to kill him—chose to end his own life because he could not kill his own master, but he did not want to disobey him either. Antony did not have the courage to kill himself and must ask his men’s help, but Eros stabbed himself without any doubt. Antony killed himself as a result of his own conducts, but Eros killed himself merely of his infinite loyalty to his master.

“My dear master,
My captain, and my emperor, let me say,
Before I strike this bloody stroke, farewell.

(stabs himself) Thus I do escape the sorrow
Of Antony’s death.”

I have enjoyed this play until Mark Antony died. After that, it’s like an anticlimax for me. I did not really want to know how Cleopatra will end her life (for I had already know the facts), and what Octavius would do. Act V was the most boring part of this play, and for that—and for absurdity in Cleopatra’s manner—I granted four stars for Antony and Cleopatra. Although this play was slightly interesting than Julius Caesar, but all in all, I liked Julius Caesar more.