Mark Antony in Antony and Cleopatra

I have read successively two Shakespeare with Mark Antony as one of the main characters: Julius Caesar and Antony and Cleopatra. From both plays I gathered that Mark Antony was one of the greatest generals at that time. His leadership was obvious—at least before he neglected his tasks in his madness to Cleopatra—among his soldiers. He respected them, treated them fairly, and—most importantly—he fought with them. I think it’s really important that a general or captain fought with their soldiers, not only giving orders from the comfort of his camp; this way the soldiers’ respect grew larger to their master. And Antony did this very well.

However, in personality, I think Mark Antony was a nobleman with high taste; he appreciated luxury and elegance; and although he might be a bit harsh and straight forward in his manners, he had a tender heart and very skillful in words. I imagine Antony to be a pleasant man; he must have had many friends, and they all—as also his men—loved him as he too had loved them. He must be honest and honorable, for if not, Julius Caesar must not have had confidence in him to take him in his inner circle. 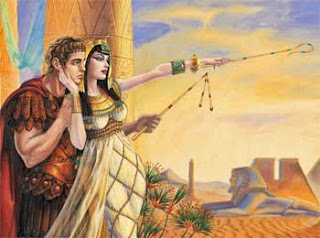 I don’t consider Antony as a very ambitious man, for he was quite comfortable in his position as Caesar’s number two. If only Caesar had never been murdered, Antony might be quite satisfied with his career in the Senate without ever pursuing to conquer the world alone; by serving Caesar at his best. But circumstances changed, Caesar’s dead, and to this time Antony had always been faithful to his master and friend. His speech during Caesar’s funeral was brilliant, maybe it can even be leveled with Cicero’s.

After that circumstances brought him to share the world with Octavius and Lepidus in the Second Triumvirate. His meeting with Cleopatra was the worst thing that happened to him and brought him to a humiliation and falling down. To have an affair with Cleopatra was not a great matter, if he did not then neglect his tasks in Rome for almost two years. Cleopatra had not only seduced him with his sensuality, but also with Egyptian vulgar exotics, luxury and elegance. Roman despised him for that, his men disgusted at him, and the ambitious young Octavius made the best he could to make the Senate grudge him.

At that point—and after his wife’s death—Antony came to his senses, and he struggled to free himself from Cleopatra’s bound. If only he was as ambitious and determined as Octavius, he might be able to resist Cleopatra’s charm. But Antony was Antony, he’s not the opportunist Caesar or the dubious Octavius; he’s just a man who praised beauty and romance.

Antony’s nobleness was obvious when he was defeated by Octavius; he granted a ship full of treasures for his men, and advised them to join Caesar, as he was already beaten. Nevertheless, Antony was still encircled by loyal captains and friends who would fight with him although they knew he would be beaten at the end. Antony was also forgiving, he forgave Enobarbus for his betrayal, and he forgave Cleopatra too—but not after he heard that Cleopatra’s dead! :)

At the end, how could I not like a man like him? He had a weakness—but who didn’t?—but otherwise he was a true gentleman, an honest and loyal friend and leader.

Posted by Fanda Classiclit at 7:00 AM
Email ThisBlogThis!Share to TwitterShare to FacebookShare to Pinterest
Labels: Antony and Cleopatra, blog hop