Cleopatra in Antony and Cleopatra

To be a queen at her time, Cleopatra must be a very strong and smart woman; were those enough? No, because she was a woman, and women at that time were in the lower class than men. Cleopatra must have one other qualification to reach the top; it’s her sensuality. Historian concluded that Cleopatra was not beautiful, she was believed to have long nose and rather masculine face structure, but I guess she knew how to attract men; and that had become one of her weapons.

Cleopatra was ambitious, and unlike common women at her time, she was smart and a good politician. I think as a princess, she used to get what she wanted; she must have been a spoilt and stubborn princess. It became more obvious when she was a queen. I never believe that Cleopatra had really fallen passionately in love with Mark Antony; I think Cleopatra was much stronger than that. Love and lust must not have been her weakness, no, she needed to make an alliance with Antony after losing Julius Caesar. If she was portrayed as an obsessive lover to Antony, it was because she wanted to make sure Antony was still in her side, as was reflected from this scene:

Cleopatra: “If it be love indeed, tell me how much.”
Antony: “There’s beggary in the love that can be reckon’d.”
Cleopatra: I’ll set a bourn how far to be belov’d.” 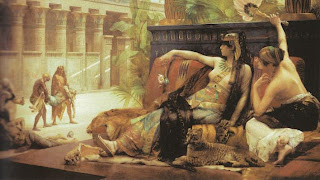 Cleopatra had won Antony, and she demanded that his intention and interests would always be for her. When she tried to hold him in Egypt, it looked like a silly jealousy of a young girl, but I believe it’s more than that.

Although it was not clear whether Cleopatra had betrayed Antony to gain Caesar’s favor for her and her children’s safety—I have searched about this in the internet without any success—I still believe it was indeed the case. Of a woman of self possessed and brave such as Cleopatra, I could not imagine that she had never defended herself from Antony’s accusation. It’s rather strange too how the Egyptian suddenly left their master to join Octavius (in the second war near Alexandria) when it seemed that they would have won the war. Moreover, didn’t Octavius say that he could not fight before Antony attacked first? (Scene XI Act IV). I believe Cleopatra had done something in this, Mark Antony was not a stupid general, he must have known better than anybody else.

After Antony had died, I think Cleopatra did felt a bit depressed. As a woman I think, she must have felt alone without Antony. I wonder whether she’d ever thought that she would have been happier if she’d never pursued her ambition? Ah…but for an unordinary woman like Cleopatra, living an ordinary life would be much torturing than having to commit suicide to die in honor as she have chosen. Maybe….

Posted by Fanda Classiclit at 7:00 AM
Email ThisBlogThis!Share to TwitterShare to FacebookShare to Pinterest
Labels: Antony and Cleopatra, blog hop