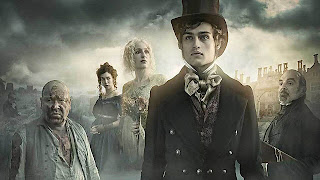 First of all I must thank Melisa for copying this miniseries of Great Expectations for me (come with it also Dorian Gray and Importance of Being Earnest which I haven’t yet watched). This three-part miniseries was produced by BBC in 2011, an adaptation work of Sarah Phelps.

As I like to compare the movie with the original book, I watched this miniseries only several days after I have finished reading the book (when the story and the emotion were still quite fresh in my memory). So, here’s my review:

Overall it’s okay, I had only two objections. First, the cast for Joe which I think was too old and less innocent. Joe in this miniseries didn’t look like a hopeless husband under his wife’s domination. In fact once or twice Joe bravely grasped Pip from his wife’s beating; while in book Joe did not even dare to confront his wife, afraid that he too would be beaten by his wife. Joe was also supposed to be a shy guy, that when he must meet Miss Havisham, he kept directing his words to Pip instead of talking directly to Miss Havisham. The Joe in the miniseries seemed to have more confidence. And I’m just wondering, why Joe did not look older at all at the later part, while all others did. :) My same complaint goes for Wemmick’s cast. He’s much too old, almost as if he’s in the same age as Mr. Jaggers! About Mr. Jaggers, I think he had played in Agatha Christie’s movies as Hercule Poirot!

But the worst, I think, is Estella’s cast. I’m so disappointed that she was far from “very pretty” that made many men attracted to her. When Miss Havisham presented the grown up Estella to Pip; when Estella stood next to her mother, well….Miss Havisham was even prettier than her, despite of Miss Havisham’s pale face (Gillian Anderson played as Miss Havisham). Estella in this miniseries looked too boyish with her skinny and bony body (especially when she wore strapless gown that seemed to hang loosely and rather un-proportionately on her body, ugh!). Young Estella reflected much better Estella's original character from book.

Overall the plot followed the original one, only simplified here and there as we could expect in movie adaptations. However, there are few things I did not agree with. First of all, Biddy never showed up. This perhaps will make the plot more complex, but I think Biddy has also some influences in Pip’s development. The second one was how Pip resisted to Magwitch for—for me—too long; it only made Pip looked like an ungrateful person—which I don’t think so. In the book Pip involved in the runaway preparation, and Pip was tortured badly in the waiting of the event.

The last one was the relationship of Pip and Estella; I know that movies tend to make everything smooth. As if without at least one kissing scene—and it happened always on romantic places which involving water (sea shores, by the lakeside…)—you won’t be able to attract audiences. Perhaps it’s right, but watching how Estella seemed to suddenly and quite easily loosen her resistance against Pip right after leaving Satis House was ridiculous to me.

Now, while the castings and plot might be slightly disappointing, the settings and the costumes were really an entertainment! The misty marshes was fabulous, the forge and Pip’s home were everything I always imagine them to be. Satis House with the dusty and gloomy atmosphere, and the room with cobwebbed party left-over was also cool. So pity we can’t see Wemmick’s country house, that would be very interesting! :) 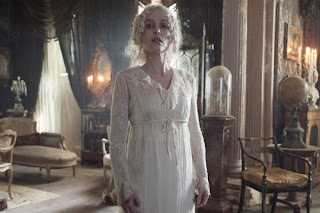 I like the gentleman’s costumes here, especially Pip’s. Gillian Anderson looked elegant in Miss Havisham’s old wedding gown, but I hate the choice for Estella’s costumes, they were too plain—considering that Miss Havisham did everything she could to make Estella shinning with beautiful jewelries. The jewelries had never appeared in the miniseries, and compared to other ladies in the ball—for example—Estella seemed too pale and ordinary, that if I had been one of the gentlemen there, I would have not regarded her at all.

One thing that was also interesting is the opening credits. I like the idea of the transformation of a cocoon to a beautiful butterfly; it represents Pip’s transformation so beautifully. He must get through hard times before finally become a true gentleman (not only in outer appearance, but also in heart).

All in all, it is quite enjoyable, especially if you have never read the book, or you have read it long time ago that you have forgotten most of the details. 7 to 10 is the best I can give for this miniseries.

Posted by Fanda Classiclit at 7:12 AM
Email ThisBlogThis!Share to TwitterShare to FacebookShare to Pinterest
Labels: classic movies, Great Expectations