The Merchant Of Venice 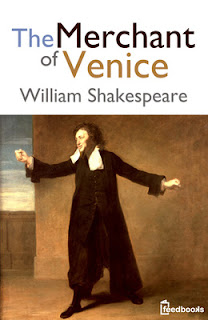 The Merchant of Venice was the second comedy I have read from Shakespeare’s plays. After successively read two tragedies, it’s quite relieving to flow with a lighter story, with beautiful words. The main plot of this play was concerning Antonio—an honorable Venetian merchant—who wanted to help his dear friend Bassanio to pursue his love for a wealthy girl named Portia. Antonio agreed to be Bassanio’s guarantor as the later took a credit from a cunning Jewish moneylender named Shylock.

Being a Christian hater—especially to Antonio who always lent money gratis—Shylock was full of joy when he found out that Antonio’s ships had wrecked at the sea, that he won’t be able to pay back the money. Wanted to take revenge to Antonio, Shylock sued Antonio in court to be cut his flesh for exchange of the money.

Meanwhile, with the money from Shylock, Bassanio had departed to Belmont to enter a contest set by the late of Portia’s father to get a husband for his daughter. A suitor who could choose the right casket from three choices would become Portia’s husband. It was a great test indeed, for Portia was very rich, that his father was afraid she would get a greedy man as a husband.

And between those two situations, Shakespeare crafted witty and interesting scenes and acts to become this beautiful play.

This is the third play I read for Let’s Read Plays and I found at least one similarity from those three, that the servants—despite of being secondary characters—were wiser than their masters or mistresses, and the main characters often learned from them. Here is when Nerissa taught her lady, Portia, about how the balance of trouble and happiness would make live longer.

“It is no mean happiness, therefore, to be seated in the mean.
Superfluity comes sooner by white hairs, but competency lives longer.”

It’s interesting too how Shakespeare picked a Jewish as the stereotype antagonist; I wonder whether it did not stir many controversies from Jewish readers? Another thing, being a comedy, this play still made me a bit uncomfortable when Antonio asked Shylock to be a Christian (Act IV Scene I). When Antonio was asked by Portia: “What mercy can you render him, Antonio?” he replied: “..Two things provided more: that for this favor he presently become a Christian…” I could not understand how forcing somebody to have one’s religion can be regarded as a mercy. And that request changed my respect to Antonio.

Besides that annoyance, I found this play quite entertaining, especially whenever Launcelot was in the scenes, such as this one (talking to Gobbo—his father):

Gobbo: “..what a beard hast thou got! Thou hast got more hair on thy chin than Dobbin my fill-horse has on his tail.”
Launcelot: “It should seem then that Dobbin’s tail grows backward. I am sure he had more hair of his tail than I have of my face when I last saw him.”

Over all, Merchant of Venice was an exotic and intriguing play; it criticized men’s greediness. I found it funny in Portia’s father casket contest, and a bit tragic in Shylock’s judgment. Four stars for Mrchant of Venice!

Posted by Fanda Classiclit at 7:16 AM
Email ThisBlogThis!Share to TwitterShare to FacebookShare to Pinterest
Labels: 17th century, Comedy, Italy, Play, The Merchant of Venice, William Shakespeare