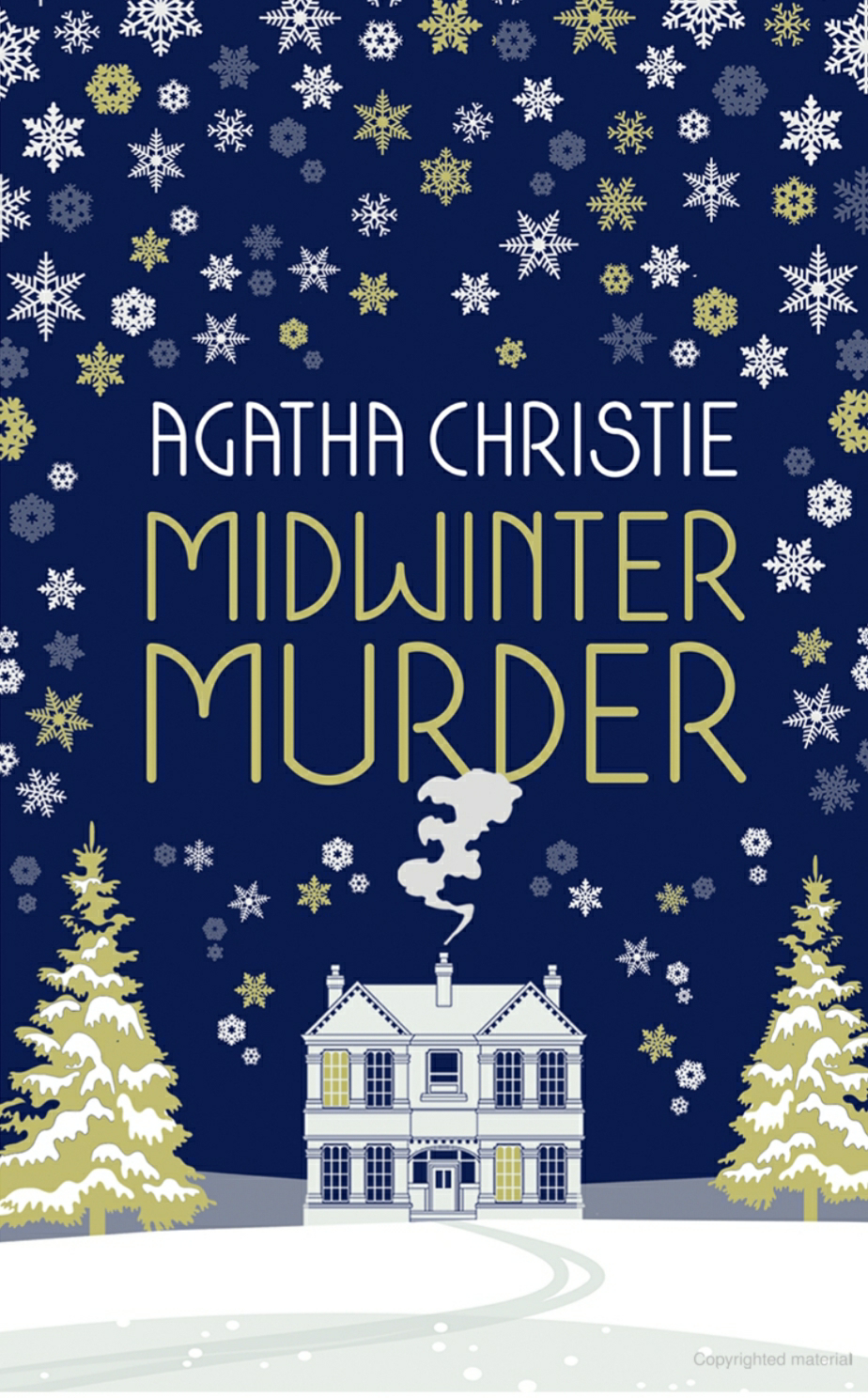 Agatha Christie had written tons of short stories during her career, and within the last century, many compilations have been published. Midwinter Murder: Fireside Tales from the Queen of Mystery is the newest, published in 2020. "There's a chill in the air and the days are growing shorter… It's the perfect time to curl up in front of a crackling fireplace with this winter-themed collection from legendary mystery writer Agatha Christie." ~ agathacristie.com.

All the 12 short stories compiled here have been published before. So, if you're an Agatha Christie's hardcore fan, you've probably read all of them before, but with so many of her novels and short stories, it's most likely you've forgotten most of them. So, it's kinda refreshing, really, to read them for Christmas!

Despite of the title, at least four of the stories are non murder cases. But there are two points that make this compilation more interesting than its predecessors. First, it consists of random detectives; Poirot and Hastings appear most often (five stories), then there are two by Miss Marple, two of Mr. Quin's, one of Parker Pyne, and one of Tommy and Tuppence (which is pity, I expected more of them, as theirs are usually the most humorous). But the best part is the excerpt of Christie's autobiography about how she used to celebrate Christmas as a kid. Now, that seems like the best Christmas one could have!

Since I'm bad in memorizing plots, I jotted down short summary of each story here:

1. The Chocolate Box
Published earlier in: Poirot's Early Cases.
Poirot recounted his one failure to Hastings. He was a member of the Police force in Brussels.
Background: feud between church and state in France
Victim: Paul Deroulard, a French deputy, a Minister to be, who is against the church
Location: his own house
Suspect: two guests
Weapon: poison inserted in a piece of chocolate (victim's favorite)
Poirot's clue: chocolate box with unmatched box and lid colour.
Characteristic: simple familial murder.
Similarity: The Mysterious Affair at Styles
Interesting point: Poirot's failure

2. A Christmas Tragedy
Published earlier in: The Thirteen Problems
Miss Marple told a tragedy of a husband whom she knew instantly wanted to kill his wife. She couldn't prevent it. The wife (Gladys Sanders) was killed, but Mr. Sanders got himself a perfect alibi.
Location: a Hydro (health resort)
Suspect: the husband
Weapon: sandbag
Miss Marple's clue: the hat (found later beside the body, not ON its head as had found earlier when they found the body) and the locked hat cupboard.
Characterisic: simple but genius plot, understanding of human psychology.

3. The Coming of Mr. Quin
Published earlier in: The Mysterious Mr. Quin
It's New Year's Eve. Three gentlemen, a woman, and Mr. Satthertwaite - the human lives observer - are reminiscing about the mysterious suicide of a Derek Capel, when a dark mysterious stranger comes. He subtly guided them to solve the problem, along with another murder case.
Characteristic: the enigmatic, mysterious, evasive Harley Quin, modern gothic story.

4. The Mystery of the Baghdad Chest
Published earlier in: The Regatta Mystery and Other Stories
A heavy oriental chest called Baghdad Chest is installed in Major Rich's house. The night after he gave a dinner party, a body of a Mr. Clayton - who suspected that his wife is having an affair with the Major - was found inside the chest. The wife asked Poirot's help to solve the case; and this story was told by Hastings.
Suspect: The Major
Weapon: stiletto knife
Poirot's clue: holes freshly bored in the chest
Characteristic: "A perfect murder. Épatant!" ~ Hercule Poirot

5. The Clergyman's Daughter
Published earlier in: Partners in Crime
Tommy and Tuppence investigate a very interesting non-murder case; actually it's the sweetest Christmas story from Midwinter Murder. A poor girl who lives with her mother inherited a house from her aunt. After she rejected offers from two buyers, strange and horrible incidents started to happen in the house, even poltergeist situations. The girl was also sure that the two buyers are actually one. So, what's in the house that someone insisted on buying at any value?
Location: Red House
Characteristic: poltergeist, treasure hunting, sweet

6. The Plymooth Express
Published earlier in: Poirot's Early Cases
The similarity in plot with The Mystery of the Blue Train is so striking. A rich daughter, who married a scoundrel and has an affair with a womanizer Count, is having a journey on the train. She was murdered, the jewels were stolen. The father employed Poirot to find the murderer, though at this story, Hastings was accompanying him, while in The Mystery of the Blue Train, a girl was Poirot's sidekick.
Location: Plymouth Express
Weapon: a knife
Suspect: the husband or the lover
Poirot's clue: the striking blue dress
Characteristic: red herring-motive-wise.

7. Problem at Pollensa Bay
Published earlier in: Problem at Pollensa Bay and other stories
Non murder case - it's hardly a case anyway - for Parker Pyne, the problem solver. A strictly conventional mother is worried over his son's choice of a modern girl as his future wife. Pyne solves the problem quite unexpectedly, though I could guess it easily.

8. Sanctuary
Published earlier in: Miss Marple's Final Cases
After finding a dying man inside the church, whose final words are "Sanctuary", something like "Julian" (the vicar's name), and "please..." the intelligent vicarage's wife asked her Aunt: Jane Marple, for advice.
Interesting point: "never underestimate woman's intuition!"

9. The Mystery of Hunter's Lodge
Published earlier in: Poirot's Investigate
Poirot is taken I'll by influenza, so Hastings performs the investigation of the murder of Mr. Havering's uncle.
Location: a hunting lodge
Suspect: a stranger, the black-bearded man, seen by the housekeeper.
Weapon: a pistol
Poirot's clue: Mrs. Havering's past occupation
Interesting point: justice prevails!

10. The World's End
Published earlier in: The Mysterious Mr. Quin
Another non murder story, but the most interesting so far. Mr. Satterthwaite is on holiday with a Duchess, where he meets a distracted girl. Together with an Indian judge they journey by car to a hilltop island called The World's End, where they meet Mr. Quin. A snowstorm forced them to take shelter in a house, where a forgetful actress tells a story about her treasured opal which was stolen by a young writer.
Clue: the actress' ingenious Indian box with hidden compartment.
Characteristic: two stories which seems unrelated, and vague uneasiness about a tragedy to come.

11. The Manhood of Edward Robinson
Published earlier in: The Listerdale Mystery
The young but immature Edward Robinson is seeking romance and adventure before tying the knot with his sensible and prudish fiancee. He bought his dream car with out of luck money, and involved immediately in a real adventure, with gorgeous lady, party, and jewels. Then something goes wrong, that will change the young man's life.
Characteristic: adventures

12. Christmas Adventure
Published earlier in: The Adventure of the Christmas Pudding
Poirot is invited to spend Christmas in a manor house with some young people. An anonymous note warned him not to eat the plum pudding. The host, however, finds a ruby inside his pudding. The young people then staged a "murder" to prank Poirot. The "victim" is found dead the next day, clutching the ruby in her hand.
Characteristic: plot twists between real and fake - murder and jewel theft.

Posted by Fanda Classiclit at 7:23 AM